In research reported by Andrew Ross Sorkin on options trading before merger announcements, everything you'd predict, if you were maximally cynical, the researchers found.

Andrew Ross Sorkin had a column Monday about a new study of options trading before merger announcements, by Patrick Augustin, Menachem Brenner and Marti Subrahmanyam. And … I mean, it’s almost too perfect. Everything you’d predict, if you were maximally cynical, the researchers found. Here are the astounding highlights:

Given the uncertainty of the stock price evolution of the acquirer around the announcement date, an insider trading in acquirer options would benet most by engaging in strategies that would benet from higher volatility (i.e., a jump in stock prices, in either direction). More specically, the optimal strategy would be a zero-delta, long-gamma trade, as stated in Hypothesis H7. As stated earlier, this should be particularly true for cash deals, and, in some cases, also true for stock exchange and hybrid deals. In our sample, this will mean that, in a majority of deals, there will be uncertainty regarding the acquirer’s stock price. We, therefore, concentrate on such “volatility” strategies.

Come on, it is all a little too much. What does it mean?

Well, one possibility is the bad one: Tons of inside information about mergers leaks, and it goes not to doofus doctors in Syosset emergency rooms but to sophisticated traders who know how to use volatility strategies to leverage that information for maximum profits and minimum risk of detection by the SEC. This is both the natural conclusion and the sexy one, and Sorkin embraces it.

A problem with that possibility is that we actually have some case studies of how sophisticated hedge funds trade in inside information.6 SAC Capital did, it is fair to say, quite a lot of insider trading. It was also a giant sophisticated hedge fund that, like, knew about put-call parity. Tools were available to it. It could have done its insider trading through weird sneaky put-option trades. But, nope. It bought and sold stock, mostly, maybe a few call options.7 Same with Galleon Group. This could be a problem of just ineffective enforcement; perhaps the SEC isn’t catching the really sophisticated insider traders.8 But it is a little strange to believe that

The other possibility is a sort of a diffusion model. There is information that you could use to predict mergers, and people look for that information. Companies have on-and-off talks, which are partly disclosed before they actually lead to deals. Mergers come in waves, where one deal in an industry sparks more. Analysts talk to companies about their plans in general terms and write research reports suggesting good acquisition targets. Companies that screen as good leveraged buyout targets actually become leveraged buyout targets. Traders make informed guesses, and those guesses work out.9

Also sometimes there are leaks, and the leaks result in straight-up insider trading. In the target’s stock. Or in the Forbidden Option.

That may or may not start with insider trading. The point of the diffusion model is not that there’s no insider trading. Obviously there is. The point is that an uptick in options trading doesn’t mean that those options traders are trading on inside information. They might just be reacting to what they see, or feel, or smell, or whatever computers do, in the market.10 And the original source of that sensation might be an insider tip, or it might be just a smart guess based on research and public information.

The idea is that the market is a very efficient mechanism for taking information from informed traders—an activist accumulating a stake, or a smart value investor, or an insider’s buddy buying stock on a tip—and incorporating it into prices. Not just stock prices, but option prices too. On this model, even a small amount of informed trading—whether informed by insider tips or just research—could have a noticeable effect on options trading.

Of course, so could a large amount of illegal insider trading in short-dated out-of-the-money call options. That would certainly be a simpler explanation of the data. But if that’s what was going on, wouldn’t the SEC have caught it? Isn’t that the one thing we know for sure about insider trading?

Approximately 25% of all the cases in our sample have abnormal volumes that are signicant at the 5% level, and for 15% the signicance is at a 1% level.

Of course, 5 percent of randomly chosen 30-day periods should have abnormal volumes that are significant at the 5 percent level. That’s what the 5 percent level means. So interpreting these findings as “A quarter of all public company deals may involve some kind of insider trading,” as Sorkin does, seems like a bit much.

3 This gets squiggly: “We also nd that ITM puts, as well as OTM puts, trade in larger volumes than ATM puts.” You wouldn’t trade out-of-the-money puts to replicate the in-the-money call strategy. As the authors say, “It is unclear whether informed traders would take long or short positions in call and put options, since replication involving the underlying stock as well as the option can change the directional benets of such trades.” See footnote 1 for some examples; the paper also has an appendix about options strategies that you could use to insider trade. It’s probably not legal or investing advice!

5 At points in this paper I get a vague feeling of “this is too cute,” and never more than on this point:

According to Hypothesis H7, we anticipate an increase in the trading volume of option pairs that have high gammas (convexity), such as ATM straddle strategies, for example. In order to test this hypothesis, we match, on each day, all call-put pairs (CP pairs) that are written on the acquirer’s stock, and that have identical strike prices and times to expiration. OptionMetrics only provides information on the total trading volume associated with a specic option, and there is no disclosure on the total number of trades. Thus, the lower of the call and put trading volumes in a CP pair represents an upper bound on the total volume of straddle trading strategies implemented in a given day. Even though this number does not accurately capture the exact straddle volume, a change in its upper bound across event times could be informative about the potential trading strategies undertaken by insiders, as a proxy.

And they find such a change in call-put pairs, though it’s not huge. Even if you don’tquite buy the idea that these pairs represent straddles put on by insiders as stock-price-neutral bets on volatility, the weaker point — that volatility trades in the acquirer’s stock increase just before the announcement — is still meaningful.

6 Another problem is that the authors (are surprised to) find that the number of advisers on a deal is not statistically significantly related to the amount of option trading ahead of the deal. So the natural model of how information would leak out — from sophisticated parties involved in the deal to sophisticated insider traders — doesn’t quite fit the data.

7 And one notable swap that the SEC couldn’t figure out.

8 An easy takeaway from the paper is, “We conclude that the SEC litigated about 4.7% of the 1,859 M&A deals included in our sample.” But you should be careful with this result. First of all, that’s 4.7 percent of the deals in their sample, not of the deals where they found suspicious trading. Remember they found that 25 percent of their deals had abnormal trading significant at the 5 percent level. Roughly speaking that suggests that 75 percent of deals were normal(ish), 20 percent of deals featured someone up to no good, and 5 percent of deals were just statistically abnormal. So the SEC went after around a quarter of the suspicious deals, not 4.7 percent.

But even that is misleading! Here’s how they got the SEC prosecutions:

In total, we nd 102 unique cases involving insider trading in options ahead of M&As from January 1990 to December 2013, with an average of about four cases per year. Interestingly, the litigation les contain only one instance of insider trading involving options written on the acquirer. About one third of these cases (33 deals) cite insider trading in options only, while the remaining 69 cases involve illicit trading in both options and stocks. In addition, we nd 207 M&A transactions investigated in civil litigations because of insider trading in stocks only. The large number of investigations for stock trades relative to option trades stands in contrast to our nding of pervasive abnormal call option trading volumes that are relatively greater than the abnormal stock volumes. Out of these 102 SEC cases, 88 correspond to our sample period, which stretches from January 1, 1996 to December 31, 2012.

So actually the SEC brought 309 cases during the period of their 1,859 deals, or about 16.6 percent — well over half the number of deals that they identify as suspicious. It’s just that two-thirds of those cases were about insider trading in stock, not options. The authors ignore those cases, because their study is about options trading, but I don’t think that’s right, for reasons I’ll come back to in the text and footnote 10.

From an academic point of view, options trading around M&As is a particularly attractive laboratory for the testing of hypotheses pertaining to insider trading, for several reasons. For one thing, M&A announcements are publicly unexpected events, in terms of timing and even occurence. Thus, on average, we should not be able to distinguish options trading activity before an announcement from that occurring on any randomly chosen date. In contrast to other corporate announcements, such as quarterly earnings announcements, M&As are likely the closest we can get to a truly unexpected event, while still allowing us to construct a meaningful sample.

But “closest we can get to a truly unexpected event” is not the same as “totally unexpected event.” At least not in all circumstances: Remember, it’s only a minority of deals where they find statistically significant abnormal trading.

10 This is why I am suspicious of the authors’ counting of SEC enforcement actions (see footnote 8). If someone gets an inside tip, and buys a huge chunk of stock, and that pushes up the stock price, and some momentum-driven options trader buys an unusual quantity of call options, and the SEC investigates the stock trade and catches the insider trader — then the authors would not count that as the SEC litigating the deal. But it is! The unusual options trading might indicate insider trading, but it doesn’t necessarily indicate insider trading in the options. 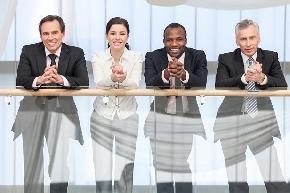 5 Ways Advisors Can Stay Ahead of the Competition

Morningstar and Mercer joined up to outline the actions advisors should take to stay relevant.