8 Big Estate Battles of the Rich and Famous

Nothing sets friends and family at each others throats more than an old-fashioned fight over money. Make it a dispute over a will and the fun really begins.

Nothing sets friends and family at each others’ throats more than an old-fashioned fight over money. Make it a dispute over a will and the fun really begins.

The emotions that bubble up in estate disputes are understandably raw. Make it about the property of a famous person and it can get really crazy. A minor celebrity (see Gary Coleman) with pennies to his name can generate a court battle worthy of a billionaire (see Howard Hughes).

And that wasn’t the end of Smith’s unlikely influence on law students. After she died in 2007, her poorly drafted will and the court dispute over her body served as teachable moments for law professors as well.

Here are 8 Big Estate Battles of the Rich and Famous:

Worth: Modest home (with mortgage) and royalties

Sometimes it doesn’t take a large estate to spur a battle. Such was the case of Gary Coleman, the diminutive actor best known for his star turn on the ‘70s sitcom “Diffr’nt Strokes.” After years of being in the news mostly for health and legal problems, Coleman died in 2010. He was just 42. Then the battle began.

According to an account on Forbes.com, Coleman had left three wills, the last of which was a handwritten codicil bequeathing everything to his wife, Shannon Price. “Everything” was a home that still carried a mortgage, occasional royalties from his acting career and his ashes. The problem was, Coleman and Price had divorced, even appearing on “Divorce Court.” Still, Price claimed they had a common-law marriage. A judge disagreed, saying the marriage had ended. One of the stranger estate battles in Hollywood history ended with Coleman’s former business partner, Gray, taking the spoils.

Winners: To Be Determined

Losers: To Be Determined

When the Godfather of Soul died of a heart attack at 73 in 2006, he left his estate to charities that seek to educate disadvantaged youths. The directive seemed pretty clear, but it didn’t sit well with his widow, Tomi Rae Hynie, or his adult children. According to Forbes.com, the widow may not have been technically married to Brown (she was married to another when they got hitched) and there were questions about whether he was really the father of at least one of his nine children.

In 2009, the South Carolina attorney general announced that a settlement had been reached: the widow and the children would split half the money with the rest going to charity. Alas, the deal did not pass court muster this February when a court ruled it violated Brown’s will. For now, the estate sits in limbo.

Artist Thomas Kinkade built his fortune by making people smile and feel good when they gazed upon his soothing country scenes. The “Painter of Light” left a more complicated situation behind when he died in April 2012 at 54. Pinto, who became involved with Kinkade after his marriage broke up, claimed she had two notes written by Kinkade directing that she receive his mansion as well as $10 million designated for a museum of his artwork. Kinkade’s wife disputed the claim. Somehow, the women managed to avoid a long, drawn-out drama and reached a settlement before the end of 2012. The details are secret.

Jim Hendrix ruled the rock world when he died in 1970 at age 27, but multiple battles over his estate have left it in a haze to this day. His father, Al, who had served as Jimi’s manager, battled record companies and other music industry entities for the rights to his songs and merchandising. He won out and everything was settled until Al died in 2002. Then the rancor began. The estate by then was worth $80 million.

The bulk of it was left to Al’s adopted daughter Janie. Al’s other son by Jimi’s mother, Leon, and Leon’s children sued, saying Janie had influenced Al to leave them out of his last will. After a three-month trial, a judge ruled Janie had not unduly influenced Al and that Leon’s history of drug use was reason enough for Al not to have trusted him with the estate.

Losers: Depends on how you look at it.

When one of the sons of Johnson & Johnson founder Robert Wood Johnson died in 1983, his children were more than a little miffed at the terms of his will. You see, J. Seward Johnson I left nearly all of his money to his third wife, a Polish farmer’s daughter who was 42 years younger and had once been his maid. Johnson’s six children contested the will, claiming their father was incompetent and pressured into making the bequest.

In the end, the children were awarded $6 million each. John Seward Johnson Jr. was granted an extra $7 million as head of the oceanographic institute founded by senior. The kids were already millionaires through trust funds, but Junior told The New York Times that the will was a family embarrassment. In the end, Barbara, who died last April at 76, kept most of the money and the kids were left with a $25 million legal bill.

J. Howard Marshall II wasn’t a household name in life (he made most of his fortune in oil and by investing in Koch Industries), but thanks to a wild, drawn-out (is there any other kind?) lawsuit over his will involving former Playboy Playmate Anna Nicole Smith (his wife and 62 years his junior) and his namesake son versus his stepson, he became well-known after his death in 1995.

The battle over the estate boiled down to this: Smith and the namesake son were left out of the will, while the stepson was left everything. After years of battles in the court, an aspect of the case reached the U.S. Supreme Court. Alas, Smith’s efforts were rebuffed. Smith and J. Howard Marshall III have since died, but the U.S. Circuit Court still has not made a final ruling in the case.

Losers: Two ex-wives, a gas station owner, executives who worked for Hughes, among others

Howard Hughes was famous for many things. He was a pioneer in aviation. He made movies, perhaps most famously with Jane Russell. He piloted TWA. He had run-ins with U.S. senators. And at the end he was an eccentric recluse and the butt of late-night jokes on TV.

When he died in 1976 and no verified will was found, the headlines grew bigger. There was the handwritten document found on the desk of a Mormon Church official. That “will” left, among other bequests, $156 million to Melvin Dummars, a gas station owner whose account of giving Hughes a ride when he was stranded in the desert was used as the basis for the 1980 movie “Melvin and Howard.” It was another three years before the estate was settled by the courts, dividing the fortune among 22 cousins. In 1984, actress Terry Moore settled with the estate over her purported 1949 marriage to Hughes. She said the couple had never divorced. The sum she received was undisclosed.

When she died in 2007, Leona Helmsley left most of her fortune to charity, but it was a relatively small bequest that had everyone talking. Trouble, Helmsely’s apparently aptly named Maltese, received $12 million. She specifically left two of her grandchildren out of her will saying they knew the reasons, while two others only received money from a trust only if they visited their grandfather’s grave each calendar year.

The public outcry was enormous, even bringing death threats against poor Trouble, whose annual security bill was said to reach $100,000. In the end, Trouble’s inheritance was reduced to $2 million and a judge ruled the left-out grandkids would each receive $6 million.

Check out these related stories on AdvisorOne: 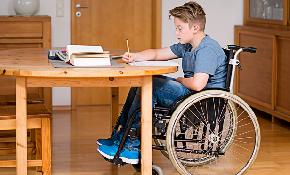 $3B RIA Gets Investment Boost From PE Group Merchant

The firm, Corient Capital, was formed by breakaways from Merrill in 2015.