April kept the Twitterati of the finance world in top form.

When a bombing killed three people and injured hundreds at the finish line of the Boston Marathon, Americans took to Twitter, watching the aftermath of the attack unfold in real time as journalists and other observers unearthed a cascade of details (some more accurate than others). The stream of breaking news continued for weeks—near the end of the month, hundreds of tweets with the words “Boston bombing” appeared every hour.

The month also brought its share of market antics. Gold plunged, Bitcoin took a wild ride and one of the most influential economic policy papers in recent memory got called into question by a simple spreadsheet error. A Syrian group hijacked The Associated Press’ Twitter feed, posting fake reports of explosions at the White House and causing a blink-and-you’ll-miss-it $200 billion crash of the S&P 500—it quickly recovered.

Meanwile, Sallie Krawcheck threw a punch in the battle of the sexes, the Reformed Broker Josh Brown got snarky about Spanish unemployment and Bill Gross opined on the pomp and pageantry of stock trading.

Here are 15 of this month’s best finance tweets:

Tweets on a variety of economic topics:

Gross: Opening bell ceremonies rather comical really. People clapping for themselves making money. For now that is.

To the person who found my website by googling “Should I cash in my 401k to pay off student loans?” the answer is No… you shouldn’t

Google launched a feature letting you choose what happens with your data after you die. Toughest part of building it was the user testing.

On the plunge in gold prices:

Goldman’s short #gold call on April 10 (which they now closed) netted clients 10%. Not a bad bone to throw to the muppets for 6 days work.

On the spreadsheet error found in Carmen Reinhart and Kenneth Rogoff’s seminal paper on economic growth and government spending:

In response to Rogoff-Reinhart’s Excel error, which led them to ignore 5 of 20 countries, many critics seem to be advocating ignoring all 20

Inspiring story for students….and quite embarrassing for professors (Note to self: Double Check Spreadsheets.)reut.rs/11ga48p

Reinhart & Rogoff try to call backsies on their austerity-mongering: slate.com/blogs/moneybox…

Take a look at what happened to the S&P 500 as market reacted to hack of AP’s Twitter account pic.twitter.com/vi7yqCRSBp 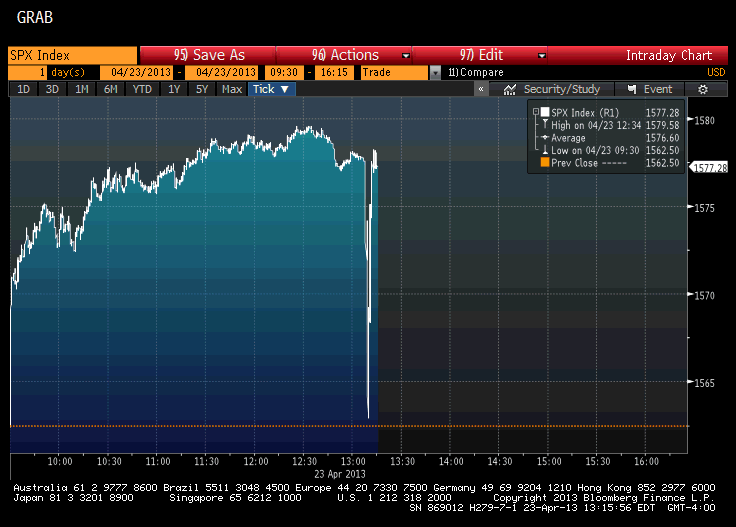 Until I see a rapper wearing Bitcoin chains, I’m sticking with gold.

We can laugh at Bitcoin but real guys, in real basements, are losing real fake money right now.

What’s your favorite finance Twitter feed? Did we miss any good ones? Leave your thoughts in the comments.