The deal will solidify ENVs presence in the bank channel, CEO Jud Bergman says. The $10 million-plus acquisition adds scale to its platform.

Envestnet Inc. (ENV) announced Friday that it has agreed to acquire Prudential Wealth Management Solutions for $10 million in cash and a further $23 million in contingent payments, “solidifying” Envestnet’s presence in the bank and bank trust channel, according to Chairman and CEO Jud Bergman.

Bergman (left) said Envestnet had already been working with seven or eight of the largest banks’ broker-dealers, which tend to clear through Fidelity and Pershing, while Prudential WMS had bank clients “ranging from mid-sized regionals to large national banks,” along with a large international bank.

Bergman said that providing Envestnet’s technology platform and open-architecture access to a wide range of money managers would help the advisors and wealth managers in those banks to more efficiently grow their businesses through Envestnet’s research, analytics, rebalancing, portfolio management and performance reporting capabilities. Envestnet’s Envestnet | Prima division also has a solid presence in many banks.

Bergman called the deal a “consolidating acquisition” that plays to Envesnet’s “core competencies” in providing “large-scale enterprise conversions.” The Prudential acquisition provides Envestnet with its latest chance to conduct such conversions, following a string of acquisitions in recent years, including FundQuest, Prima Capital and Tamarac.

The acquisition is expected to close by the early third quarter, and the financial benefits to Envestnet “may take a year or longer from closing,” according to an Envestnet statement. As for the $23 million in contingent payments, Bergman said that “a good outcome would be for us to make the full contingent payment,” since it is based on growing the acquired business.

The advisors and portfolio managers in the banks and bank trust departments, said Bergman, will benefit from “the best practices that are already taking place” in the overall advisory world, moving from a “fairly closed” wealth manager model still prevalent in the bank environment to an open-architecture platform providing access to more products and managers. “We’ll empower the portfolio manager “ in the trust deparments “with better tools and solutions, and empower the wealth advisor with access to cost-effective wealth managers.”

The impetus for the transaction, said Bergman, sprang from discussions the company had where it learned that bank wealth managers wanted, “not unlike in the dually registered advisors world,” the analytics, rebalancing and performance reporting capabilities “which they wanted to sit on top of their enterprise.” 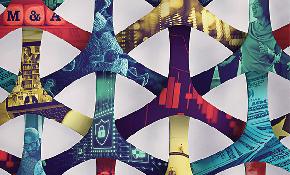 Large firms and smaller organizations know how to best serve their advisors in changing conditions, as demonstrated in this year’s lists of top-performing broker-dealers.

The 2020 Broker-Dealer Reference Guide: Best in the Business

Firms of different sizes continue to expand and innovate to meet the changing needs of advisors, clients and the broader investing climate.