No Corner of U.S. Stock Market Left Untouched by War in Ukraine

By Matt Turner and Bailey Lipschultz

From tech companies to banks to cruise-ship operators, virtually no corner of the U.S. stock market has been left untouched by Russia’s invasion of Ukraine.

The reasons are numerous. Oil prices have surged, boosting energy companies while threatening to fuel inflation already at a four-decade high.

The conflict is casting uncertainty over the outlook for global economic growth even as Federal Reserve Chair Jerome Powell says the bank is poised to start raising interest rates this month.

And volatility has surged as money-managers rush in and out of havens and industries like utilities and communication-service providers that are seen as relatively insulated from the latest risks.

“Anxiety is again rippling through global financial markets with the fear of stagflation taking hold, as the Ukraine conflict ratchets up inflationary pressures and threatens to derail global growth,” said Susannah Streeter, senior investment and markets analyst at Hargreaves Lansdown.

One of the most volatile segments of the market has been tech stocks, whose valuations are highly sensitive to higher interest rates and which serve as a gauge of risk-taking sentiment.

The Nasdaq 100 Index’s average intraday swing over the last 30 days has climbed to nearly 3%, its highest since May 2020, early in the pandemic.

On Feb. 24, the index moved by more than twice that much — with a 7% swing that day — as news of Russia’s invasion was met by a wall of dip buyers.

On Wednesday, stocks rebounded, with the S&P 500 erasing this week’s drop, after Powell assured Congress that the economy is strong enough to withstand the pullback of pandemic-era stimulus.

Even so, stocks are still down deeply this year as the war exaggerates already existing pressures.

That briefly pushed the S&P 500 Index into correction territory — or a drop of at least 10% from the peak — for the first time since the coronavirus pandemic rocked markets in early 2020.

The benchmark has since pared some of the drop and is down about 8% from the record high on Jan. 3. But that’s still the worst start to a year since 2009. 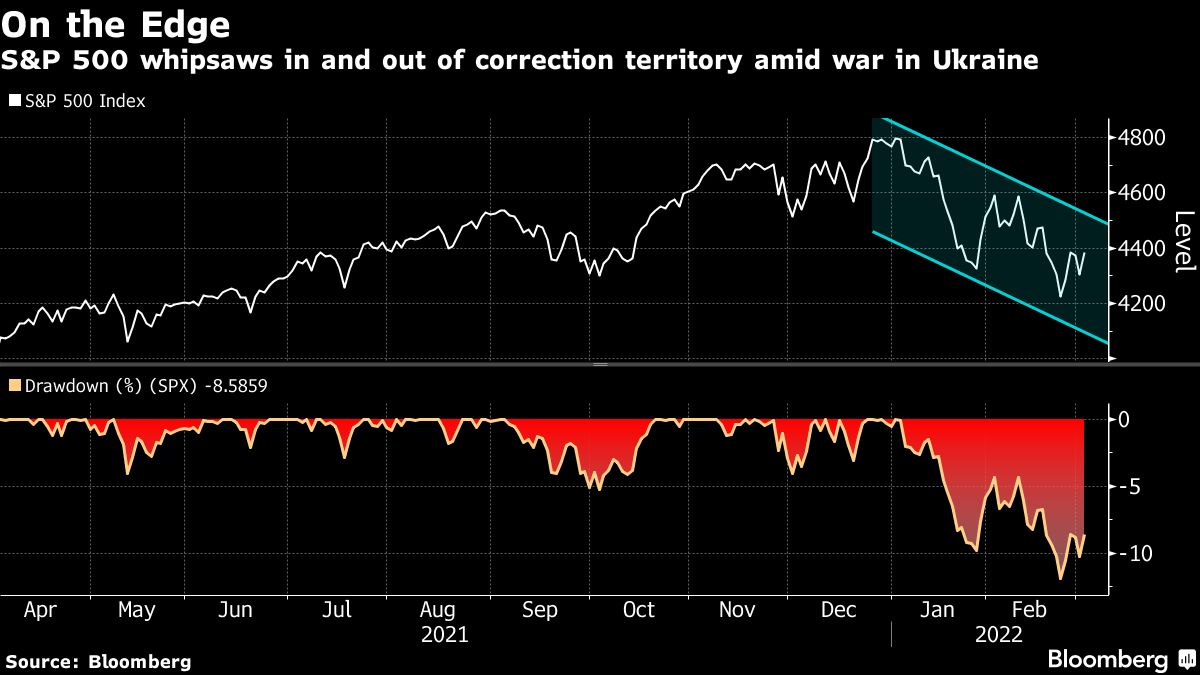 Crude oil’s surge to over $110 a barrel has added to an already strong run for energy companies.

The sector remains the only group in the S&P 500 to trade higher this year amid strength for both oil and renewable energy firms.

The impact of sanctions may also hurt some well-known American companies such as Philip Morris International Inc. and Carnival Corp.

Philip Morris, the cigarette maker, gets 8% of its revenue from Russia and Ukraine, according to data compiled by JPMorgan Chase & Co., while cruise line operator Carnival gets 3.6% of its sales from the two countries.

The two are among those that have fallen since Russia’s invasion, with food companies like Mondelez International and PepsiCo Inc. also underperforming.