One of the most important trends to emerge from the 2020 Census didn’t get much attention last week, but it reveals more about how both the U.S. economy and its politics will look in the coming years than most other details focused on by the news media.

Americans’ vision of their city of the future typically involves skyscrapers populated by large new technology companies. Yet the 2020 Census didn’t point to San Francisco or New York as the fastest-growing city, or even one of the dozens of smaller metros that emulate them. The fastest growing metro area in the U.S. is the Villages, a retirement community in central Florida.

How Prostitutes and Paparazzi Hedge Their Risk

And that’s indicative of an economy that’s older, less dynamic and more reliant on government benefits. It also points to a growing concentration of political and economic power in the south. This shouldn’t be surprising, as Americans are getting older.

An aging population has consequences for the economy. It could mean lower interest rates, at least for a few decades, because older people tend to hold more assets after a lifetime of saving and they shift some of their assets into bonds to reduce risk in their portfolios.

America will need those low interest rates because the country will be spending a lot: an older population means more people in the economy collecting benefits and fewer working. And that puts a strain on growth, which means less money will be available to invest in younger Americans and infrastructure.

The fact that a retirement community is the fastest-growing city is significant. Cities in Florida, Arizona, and Texas saw some of the biggest growth in their populations.

These states are attractive for their warm climates and low taxes, and that’s especially compelling for retirees. Retirees generally make up a very small fraction of American movers each year — up until the last few years less than 0.5% of moves were retirement related. 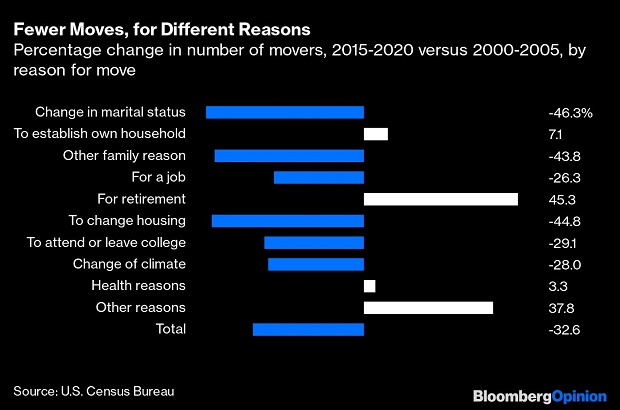 Prudential to Shed $31B in Individual Annuity Account Value

But in the last decade, retirees have emerged as the fastest growing category of movers. From 2019 to 2020, 1.3% of moves were retirement related. That’s a small number, but retirees are the only population that has become much more likely to move.

The figure above shows the percent change in movers, by reason, from the Current Population Survey, comparing the period 2000 to 2005 with 2015 to 2020. Overall, Americans are moving less. They have become less likely to move for a job opportunity and aren’t much more likely to move to start their own household.

Retirement is the only category that experienced lots of growth. Most of the increase is simply due to the population aging. But it also could be more retirees on the move. The number of Americans collecting Social Security for retirement increased 40% during this period, while the number of retirement-motivated moves increased about 45%.

This signifies an economy where there’s more growth coming from people who are moving to end their career rather than advance it. That comes with implications for our politics. Retirees tend to be a big political force when they live together in tight communities.

They have time to socialize together, become more politically active and tend to advocate to preserve entitlements. Retirees tend to be more conservative, but are also happy to collect government benefits.

If these 2020 trends continue, odds are that entitlements will not be cut and will only continue to expand. We already see what could be ahead in the $3.5 trillion second infrastructure proposal, which aims to expand Medicare with additional hearing, vision, and dental benefits while creating more well-paid jobs in caretaking.

If these proposals become law, Southern states will not only have more retirees, they’ll also attract people who earn their living by providing services to retirees. So a larger share of tax dollars will flow towards states like Arizona and Florida, where retirees live and vote.

The Census is a snap-shot of our current population, but the trends it reveals offer insight into our future. The view it showed us in 2020 is an America that’s older, more Southern and living on government largesse.

Prudential to Shed $31B in Individual Annuity Account Value