By Sarah Ponczek and Lu Wang 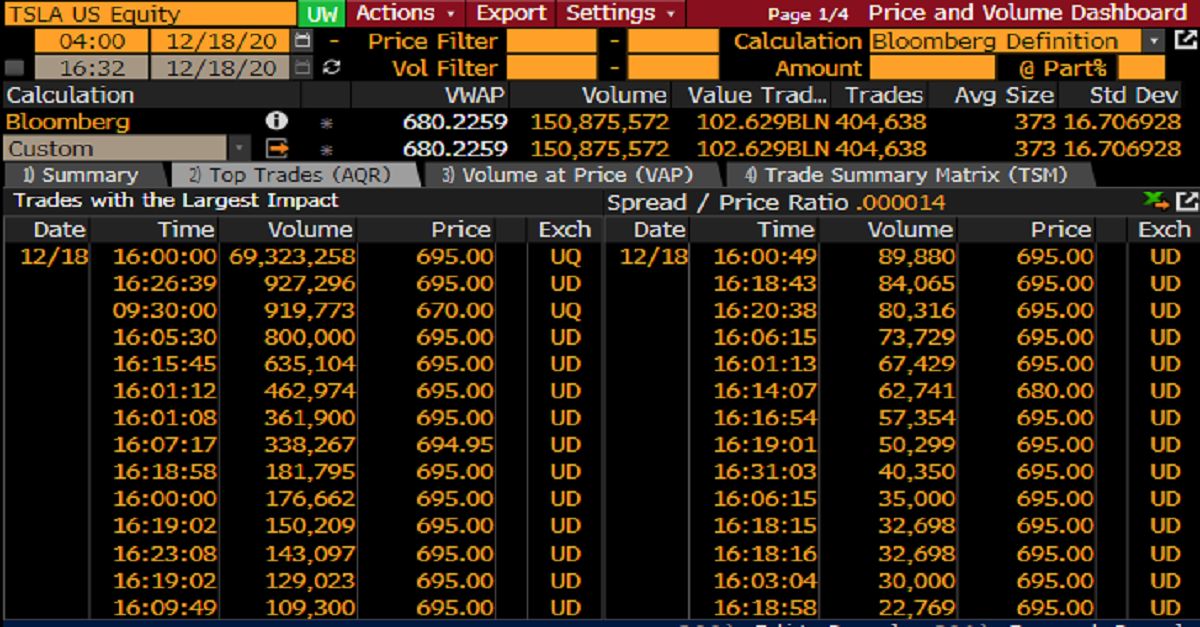 Traders spent most of the year pushing up shares of Tesla Inc. in anticipation of surging demand from index funds when it entered the S&P 500. That trade had its climax Friday, as frantic purchases by passive managers drove the shares almost 5% higher just as markets closed.

Mechanical buying by index-tracking funds sent Tesla to a record $695 in the auction used by exchanges to finish trading, about $25 above its average price Friday. At the end of the day, Tesla shares closed at an all-time high.

More than 69 million shares traded in the electronically managed closing print, a key price that will act as a starting point for passive funds that track the S&P 500.

It came on a day of extreme volume for the electric vehicle maker, which will enter the storied equity benchmark on Monday. Almost 200 million Tesla shares changed hands in the regular session.

See: What Happens When Tesla Joins the S&P 500?

While Tesla’s gyrations looked violent on price screens, especially as the close drew near, they were fairly standard for a stock in the process of being added to an index, said Larry Weiss, head of equity trading at Instinet LLC in New York.

“The chart is not atypical,” said Weiss. “Given the size of the index trade, and the notional risk of the add, you would expect an outsized move.”

As of Friday’s close, Tesla shares are up 730% this year. The S&P Dow Jones Indices committee announced Tesla would be added to the S&P 500 in November, and shares have surged around 70% since.

About $11 trillion of investment assets are either tied or benchmarked to the S&P 500, and for months investors and index fund managers have been anticipating this day, gaming out the best ways to handle the trade.

With a market-cap of roughly $660 billion, Tesla is the largest company ever to be added to the stock benchmark.

Ramming Tesla into the S&P 500 was expected to cause dislocations for other companies as index-fund managers shifted holdings to make room. In the final 30 minutes of trading, 87 stocks jumped by at least 1%, while three fell by that much, data compiled by Bloomberg show.

All told on Nasdaq, taking every stock into account, a record 1.7 billion shares traded in closing auctions Friday, worth about $150.8 billion.

Both the benchmark and Tesla itself also fluctuated widely heading into the close. As of 3:00 p.m. in New York, the stock was trading at $672 a share, still up healthily on the day. Then, shares swung more than 6% to trade below $630 a share with almost 15 minutes left. Not long after, Tesla shares spiked to close at a fresh record high.

Meanwhile, the S&P 500 climbed almost 1% in less than an hour heading into Friday’s close, as the benchmark almost wiped out a 1% loss in the last few minutes of trading before turning back in a final fit of selling.

At a price of $695, volume of 69 million shares traded in the closing auction comes out to almost $50 billion. Previous estimates had called for overall passive-fund flows surrounding the Tesla add to amount to as much as $80 billion.

“Since the final print was for less than the anticipated demand, we have to assume that they’ve been buying all week,” said Steve Sosnick, chief strategist at Interactive Brokers. “So that means they have a trading profit on those shares. The scary part is that options holders could be in for a rude surprise.”

While Tesla joins the S&P 500 as the biggest entrant by value, it’s also one of the most expensive, fattening the valuation of an index already trading at elevated price-earnings ratios. Wall Street has had trouble agreeing on how much the valuation would expand.

At 163 times next year’s earnings, the automaker’s inclusion will raise the index’s price-earnings multiple by 2 points to 23.5, according to estimates from Wells Fargo & Co. strategist Chris Harvey.

Using a different methodology, Goldman Sachs Group Inc. strategists led by David Kostin said the impact is less severe — an increase of only 0.4 point to 22.2.