I did the math: Even if future benefits are cut, claiming later will likely remain the best strategy for most retirees.

The increase in wealth associated with a delay in claiming Social Security retirement benefits rises for longer life expectancies, lower discount rates and no benefit reduction — and it can be substantial.

Investing today is tough. In my prior column, I discussed the very real possibility that interest rates could remain low for a long time, especially if the really, really long-term historical trend (going back to 1311) continues. That doesn’t leave too many great investing options for retirees today.

Here’s the thing, though: The best “investment” today for retirees isn’t even an investment at all; it’s delaying Social Security retirement benefits. While there’s been tons of research extolling the value of delaying claiming Social Security benefits, the most common claiming age for this benefit is age 62.

There’s also concerns about future cuts to benefits. Pre-pandemic estimates put the trust fund going to empty around 2034, but given what’s going on in our economy, especially with a payroll tax holiday, that estimate seems a tad optimistic.

When the trust fund goes to zero, it doesn’t mean benefits go to zero. At that point benefits would be based on taxes collected, which would reduce benefits to approximately 76% of what they are now. A possible 25% benefit reduction definitely affects the math when it comes to determining the optimal claiming strategy.

I personally can’t see benefits ever being cut for anyone already receiving them, but I do think it’s likely future generations get less. Older Americans are really good at voting, and reducing the income for current retirees, many of whom rely predominantly on Social Security for retirement income, seems a bit unsavory.

For this article I ran a quick analysis, which I detail below, exploring how delaying a claim for benefits from age 62 to 65 would be affected by varying real discount rates, life expectancies and potential cuts in Social Security retirement benefits, where the cuts are assumed to impact payments at age 65.

Long story short: Even if benefits are cut, when you factor in today’s environment of incredibly low bond yields, with the real yield on 10-year Treasuries at -1%, delaying claiming still is likely the best strategy for the vast majority of retirees.

Social Security retirement benefits are based on averaged indexed lifetime earnings. This is how these benefits change by claiming age, assuming a $10,000 benefit at age 67 (full retirement age):

The older you are when you claim Social Security retirement benefits, the more the payment increases.

When trying to analyze the benefits associated with delaying claiming Social Security benefits, it’s important to realize that you cannot “buy” anything like Social Security retirement benefits today.

Social Security retirement benefits are explicitly linked to inflation (something no private annuity offers today), are tax-favored and include survivor benefits. Therefore, while it’s possible to run some quick numbers focused on benefit payments, in reality there’s a lot more to consider.

Potential Benefit of a Delay

For my analysis I assume an individual would claim Social Security retirement benefits at either age 62 or age 65, with benefits of either $7,000 or $8,667, consistent with the previous table.

The absolute numbers don’t really matter; it’s the relative difference that counts. By delaying to age 65, the benefit would increase by 23.8% (or $1,667) per year, for life. To simplify things, everything in the analysis is in real terms (i.e., today’s dollars).

I estimate the mortality weighted net present value using different key assumptions. For the retirement period, I use the average between male and female mortality rates from the Society of Actuaries 2012 immediate annuity mortality table with improvement to 2020.

I test real discount rates from -2% to 8%. For comparison purposes the real yield on Treasures was -1.03% as of Aug. 28, 2020. Treasuries probably have the most similar risk characteristics of Social Security benefits, since they are both nearly risk-free securities backed by the U.S. government.

I assume three potential Social Security benefit reductions: 0% (no change), 10% and 25%, which are assumed to reduce benefits immediately at age 65 (when the delayed benefits would start). Obviously, the extent reductions take place later in retirement (e.g., 10 years after benefits are claimed) the lower the impact of the reduction.

The table below summarizes the total wealth impact (in percentage terms) associated with delaying Social Security retirement benefits to age 65 from age 62, based on various life expectancies, benefit reductions and real discount rates.

As the chart below — based on my analysis — shows, the increase in wealth associated with delaying claiming Social Security retirement benefits increases for longer life expectancies, lower discount rates and no benefit reduction — and it can be substantial.

Assuming average life expectancy (no change), with no benefit reduction, and a -1% real discount rate (the current real yield on 10-year Treasures) for every $1 used to delay claiming Social Security benefits the person will get approximately $2.31 back. That’s a 131% rate of return. That’s huge. 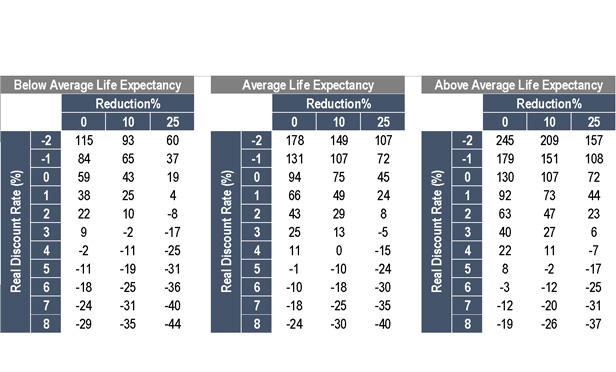 The math obviously changes when a benefit reduction is factored in, but by not a ton. For average life expectancy and a real discount rate of -1%, assuming a 25% benefit cut, the wealth impact of delaying is still +72%.

The benefit of delaying claiming gets impacted most by higher real discount rates and tends to turn negative around a return discount rate of 4%.

Again, though, this analysis doesn’t account for the other aspects of Social Security retirement benefits, like the favorable tax status of benefits and associated survivor benefits, which likely increases the required real discount rate for retirees.

The results definitely suggest, though, that even if a benefit cut is on the horizon, assuming yields stay relatively low, most people are going to be better off delaying claiming Social Security retirement benefits.

It doesn’t make sense to pay 7% interest on a loan and invest money with an expected rate of return of 1%. That’s effectively what someone does when they claim Social Security benefits early if they have the resources to delay.

The possibility of future Social Security benefit cuts definitely complicates the claiming decision process, but I would be shocked if anyone currently receiving benefits is affected.

What’s more likely is future recipients (i.e., younger individuals) are going to be affected more, but only time will tell what the impact will be.

The low bond yield environment of today makes delayed claiming especially attractive. While some people think rates are bound to rise, it’s possible they could actually keep going down, which is how things are in many other developed countries today.

In summary, while each retiree situation is unique, despite the uncertainty surrounding cuts to Social Security retirement benefits, I still think trying to delay claiming Social Security benefits as long as possible is the best strategy if you can! 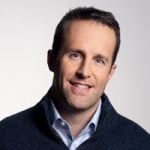 David Blanchett is head of retirement research for Morningstar Investment Management LLC. Views expressed are his own and do not necessary reflect the views of Morningstar Investment Management LLC. This blog is provided for informational purposes only and should not be construed by any person as a solicitation to effect, or attempt to effect transactions in securities or the rendering of investment advice.

There are limited circumstances in which "double dipping" by PPP loan borrowers is allowed, according to IRS guidance. The 2 Things Your Clients Need to Know About Life Insurance

A couple of basic concepts will help your clients understand which type of insurance will meet their needs.