Advisors’ Advice: You Don’t Have to Major in Business to Be a Financial Planner 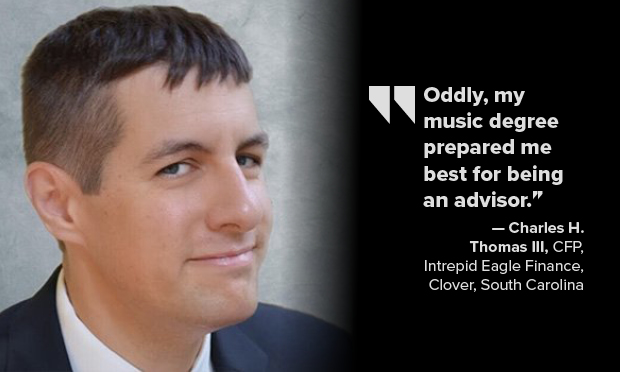 I double majored in college in marketing and music performance. Oddly, my music degree prepared me best for being an advisor. Why? First, when I made a contract to perform at an event, it was often the first time the client had ever hired a musician. This required helping the client understand what they were paying for and the value of what they were receiving. Second, to speak with non-music people successfully required avoiding jargon and using plain language to include a potential client in the conversation. Third, defining the scope of service was incredibly important for a gig. I once performed with a big band at a Christmas event. My understanding was the event would be about an hour. The event organizer expected us to play until after midnight! 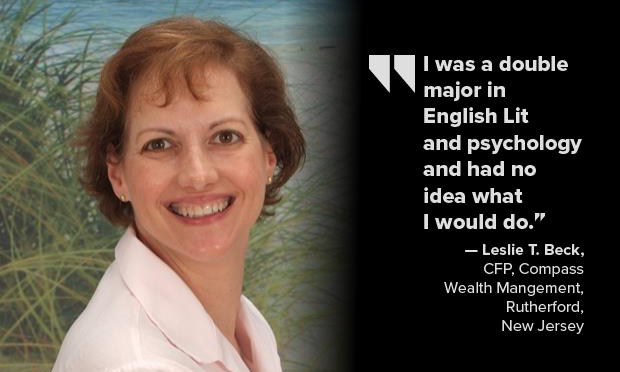 I was a double major in English Lit and psychology and had no idea what I would do. A friend got me an interview at Prudential Insurance, where I was placed in a management training program. I eventually moved to their Prudential Securities unit. Then I left for another opportunity in London that didn't work out. While trying to figure out what to do next, I was asked to help a neighbor with her finances. While working with her, she turned to me one day and said "You're really good at this — you should do this for a living. 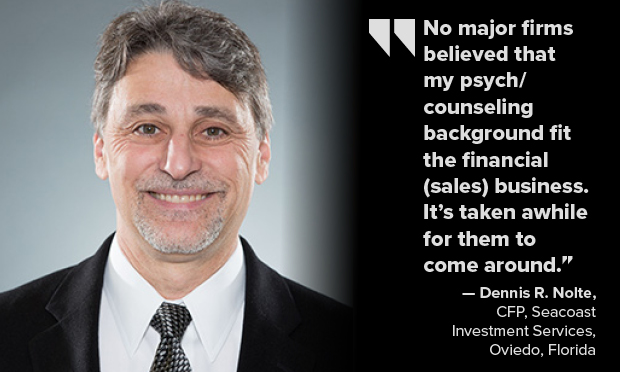 I majored in psychology and counseling, getting my master of education in 1986. Funny how long it took to pay off. When I left the addictions treatment business on 1989, I wanted to use my "advice" to help people with their finances. I also knew markets moved a lot via undefined reasons — psychology. Unfortunately, no major firms believed that my psych/counseling background fit the financial (sales) business. It's taken awhile for them to come around. 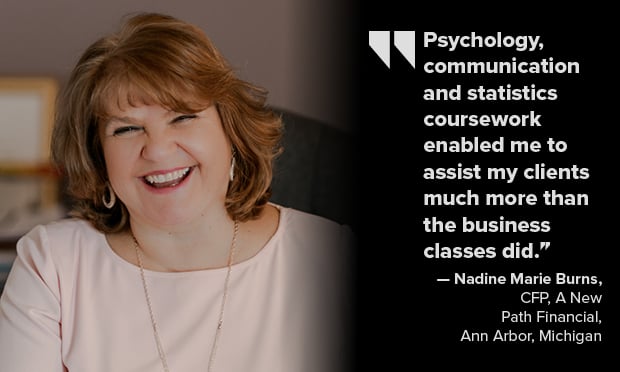 I went to the University of Michigan to become a dentist! Somewhere around organic chemistry my sophomore year, I realized that path was not for me. I created my own degree, with emphasis on psychology, marketing and statistics.Later I obtained an MBA in marketing with an emphasis in finance. I believe the psychology, communication and statistics coursework enabled me to assist my clients much more than the business classes did. Finance and accounting have changed over time, [but] relating and communicating are still crucial elements in our practice. 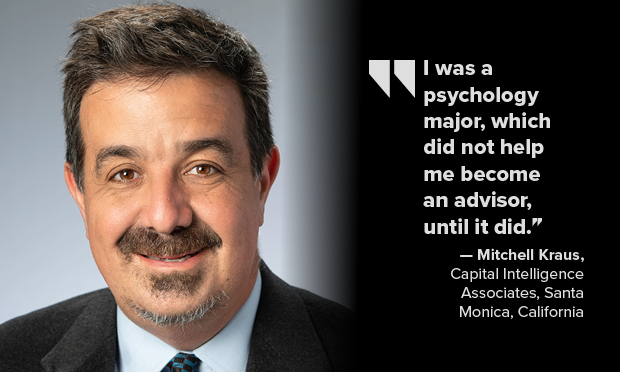 I was a psychology major, which did not help me become an advisor, until it did. I graduated with a liberal arts degree and took a job as a management trainee at a life insurance company. After a few months of selling insurance, I realized I was good at it. It was a product that many people needed, but I couldn't deal with selling it to those who didn't need it. My [advisor] father told me to talk to a financial planning firm which hired me. As I created plans optimizing client scenarios, often clients wouldn't follow the plan. It wasn't until I read about behavioral finance that I realized that no matter how optimal a plan was on paper, [it wouldn’t work] if it did not sit right with the client's emotions. 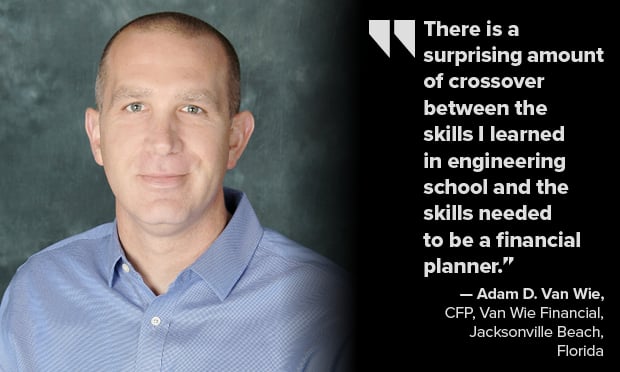 I majored in mechanical engineering (but later got an MBA), and it was a great background for becoming a financial advisor. There is a surprising amount of crossover between the skills I learned in engineering school and the skills needed to be a financial planner. Engineering school teaches you how to achieve goals by solving problems, and that is what I now do for clients. Engineering is process oriented, and we have a process that our clients follow to build and maintain wealth. Not every engineer has the necessary people skills to be a financial planner, but the ones who do will find their background benefits them in this industry. 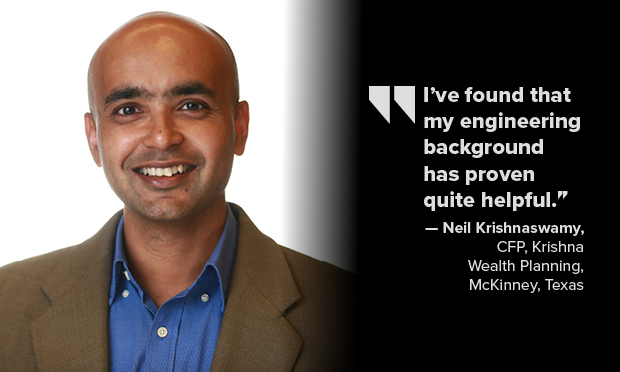 My major was electrical engineering. After about 10 years I made the switch to financial advice because … I always enjoyed seeing the impact good advice could have on the lives around me. On the surface, it might seem like going from engineering to wealth management was an extreme change. But I’ve found that my engineering background has proven quite helpful. It provided me with the scientific and process-based approach I use with clients today to help manage the complexity of their financial lives. It also prepared me to evolve my firm operationally with the fast changes taking place in financial technology. 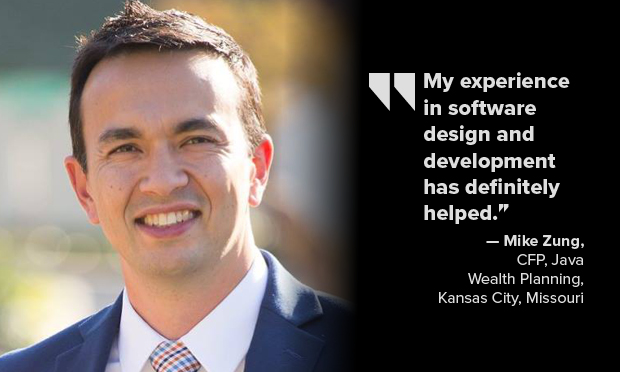 I have a computer science degree and worked in the tech industry as a software developer/lead for 19 years. I really enjoyed working in tech but wanted to focus my time and energy on work that I felt made a tangible, positive impact on the world. Also, I saw the need for solid, transparent advice as family, friends, and co-workers discussed their struggles with finances, feeling empty in their jobs, and not having a place to turn for help without someone selling them a product. My experience in software design and development has definitely helped. Both require the ability to balance soft skills to understand a client's need and the analytical mind to get it done, and be able to adjust your communication based on your audience. 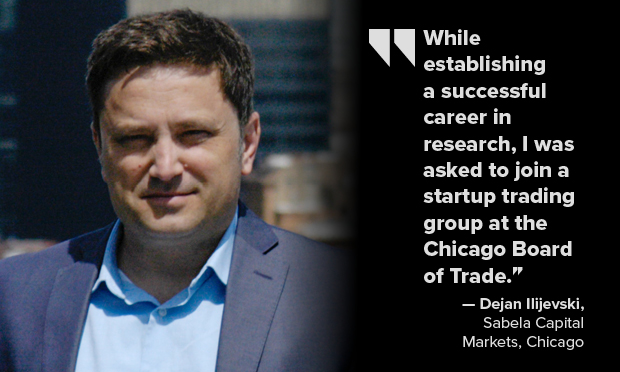 I was a chemistry major in college, soon thereafter got a master's in computer science. Most recently I earned an MBA from University of Chicago. While establishing a successful career in research, I was asked to join a startup trading group at the Chicago Board of Trade. After 12 years in the trading industry, I decided to start an independent investment advisory services firm.

My sciences and trading background helped develop my philosophy and approach to investing. ... I rely on the evidence to help clients improve their odds of investment success over the long term. Having had the unique experience of research and trading helps me focus only on those actions that can add value to expected returns. 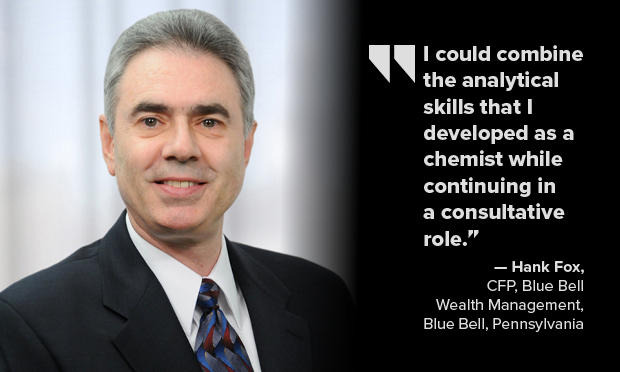 My major was chemistry and, after a career in the pharmaceutical industry, I began working as an independent consultant. As my interest in the financial markets increased, I began exploring options for an "encore" career in the financial industry. What attracted me to become a financial advisor was that I could combine the analytical skills that I developed as a chemist while continuing in a consultative role. 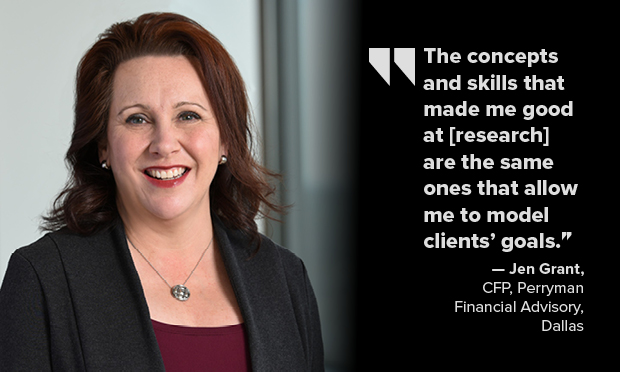 I have a chemistry degree from a liberal arts college. My first job out of college was in research and I designed experiments using software. The concepts and skills that made me good at that are the same ones that allow me to model clients' goals. In 2015, I was faced with job elimination in a year. I had the opportunity and a defined timeline to do some soul searching about the next phase of my career. After careful thought, I enrolled in a CFP program so that I would have the credentials needed. It took me a year to find a firm that had my same planning and investing philosophy and saw the strength in my experience. 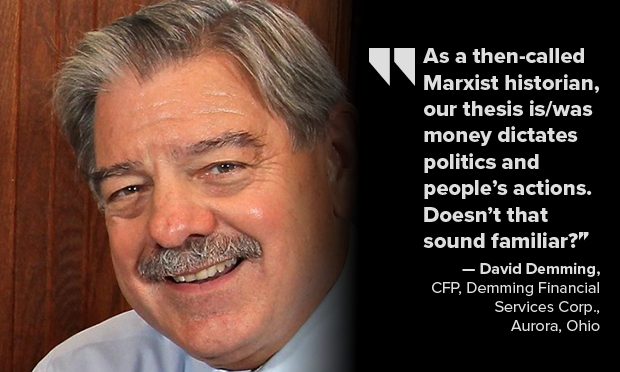 I was training to be an [economic] historian in a doctorate program at Kent State in 1970. As a then-called Marxist historian, our thesis is/was money dictates politics and people's actions. Doesn't that sound familiar? I taught school for some years for a paycheck in the inner city, so got to see first hand both the Hough and Glenville riots in Cleveland. Those experiences gave me a perspective to be a much more effective financial planner. 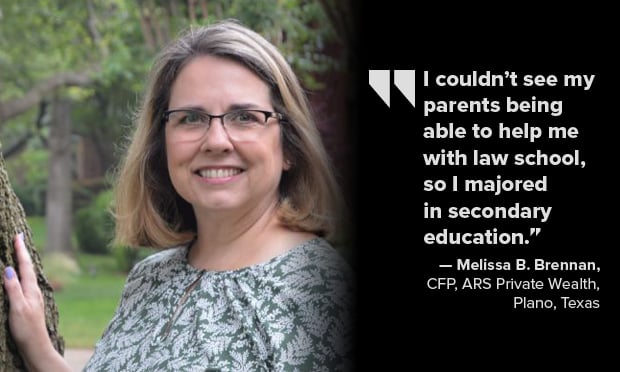 Originally I wanted to go to law school, [but] by my freshman year in college, my father remarried. Now instead of two of us kids, there were six. I couldn't see my parents being able to help me with law school, so I majored in secondary education with a social studies concentration. A couple of years into teaching, my husband took a promotion out of state. Our new community didn't have any open teaching positions. [Instead] I went to work at a bank, and then went into financial counseling and decided to get my CFP. Then I transitioned from the banking world to the RIA world. I've been a CFP nearly 20 years. 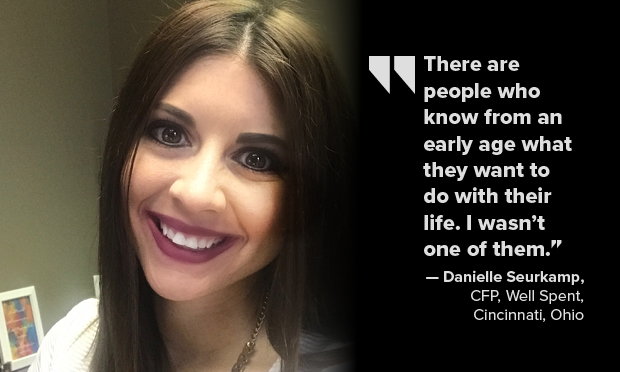 There are people who know from an early age what they want to do with their life. I wasn’t one of them. I was a French major in college and didn’t learn what financial planning was until after graduation when I took a temporary position at a wealth management firm. The three-month temp role turned into nine years of working my way up. ... I can’t say I get to use my French much in my work as a financial planner, but I do like to joke that I’m trilingual because I speak English, French and money.

(Related: Advisors’ Advice: What Was Your College Major? — Part 1)

Advisors’ academic backgrounds are as varied as the advice they provide and the clients they serve. Many have studied business and finance, but plenty graduated outside that norm and still became successful financial advisors.

We recently asked financial advisors, via the Financial Planning Association and the XY Planning Network, what they majored in and how their college studies shaped their advisory careers. In a recent article, we shared stories from those who had chosen business and finance.

Here we asked advisors who took a much different path — one studied as a Marxist historian! — but eventually found not only the business of finance, but that their non-financial educations often helped enhance their work with clients.

We received dozens of responses and can only share some here. Some have been edited for length. Thank you to everyone who participated.

See the above gallery for those responses. ADV Ratings ranked the firms, including all four wirehouses, by assets under management.