For advisors, model portfolios free up time to focus on comprehensive financial planning, estate and tax strategies, client relationships and client prospecting without giving up total portfolio control. But how do they choose the right ones?

In a recently released report, Morningstar lays out the pros and cons of model portfolios, which are growing at an accelerated rate; the universe of funds from which to choose; and some of their shortcomings.

About 400 model portfolios have been launched since the beginning of 2018, according to the report.

“If I were an advisor looking at model portfolios I would be looking at the people managing the portfolios and the resources supporting the asset allocation process … the proven records of success of the managers of the underlying funds, the sub-asset class allocations and how firms came up with those,” said Morningstar analyst Bobby Blue, one of four authors of the Morningstar report, 2020 Model Portfolio Landscape.

The “value add of model portfolios (or lack thereof) will hinge on the advisor’s due diligence process and implementation of the model,” according to the report, whose authors also include strategist Jason Kephart and associate analysts Adam Millson and Megan Pacholok.

Here are some of the basics of model portfolios that advisors should keep in mind, according to the Morningstar report. On the plus side:

On the negative side:

Morningstar analyzed 563 model portfolios, after excluding about half the 1,100 models in its database that had reported a portfolio within the past six months.Their average expense ratios ranged from about 0.40% to 1.25%, with higher fees usually associated with greater equity allocation.

The Universe of Model Portfolios

Model portfolios using actively managed mutual funds, such as those from T. Rowe Price and John Hancock, have higher expense ratios ranging from about 0.40% to 0.90%. There are also many blended portfolios that combine passive and active funds. Generally the larger the equity allocation, the higher the expenses.

“A lot of active fund shops see model portfolios as a way to drive assets to their active products,” Blue said.

Model portfolios are offered by two primary groups: strategists, who are registered investment advisors that focus on investment management and tend to charge separate strategist fees ranging from about 0.10% to 0.25%, and asset managers, whose portfolios tend to be cheaper because these managers already collect fees from the underlying funds.

The Morningstar report provides a directory of hundreds of model portfolios, noting their goals, passive or active management, availability of separately managed account track record, number of underlying funds, fees, inception dates and whether they use an ESG approach to investing.

Only a dozen model portfolios are rated by Morningstar analysts for their management, processes and parent company, and eight merited a medalist rating, which is an analyst rating above neutral — gold, silver or bronze. 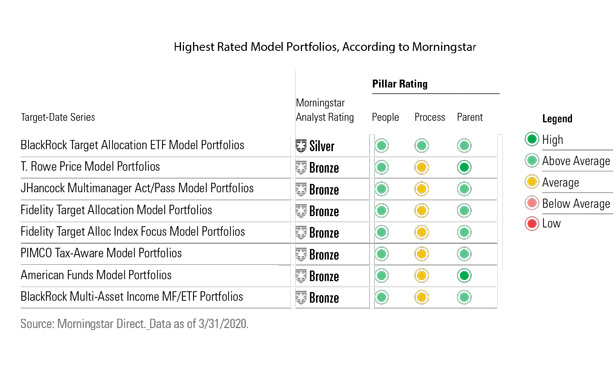