Defined contribution plan sponsors and financial advisors need to take into account much more than accumulating assets when designing retirement savings plans. They need to construct portfolios that try to match the plan participant or client’s spending budget in retirement, according to Michael Finke, a professor at The American College of Financial Services who specializes in economic security.

Most retirement investment solutions, especially those used by DC plans, use replacement ratios that estimate what percentage of a person’s pre-retirement income will be needed to maintain their lifestyle once they’ve stopped working. The higher their income, the lower the replacement ratio simply due to math, according to a PGIM report, Spending in Retirement: How you just might find what you want and what you need. But those replacement rates don’t take into account expected spending patterns, which can vary depending on income levels, said Finke, who was one of several speakers in a PGIM-sponsored webinar on spending in retirement.

He and others webinar panelists differentiated between spending needs, like food, housing and health care health care, and wants — clothing, travel and entertainment. Needs spending is more or less fixed; wants spending is flexible. But “needs expenses are greater than wants expenses regardless of income level,” said Finke. 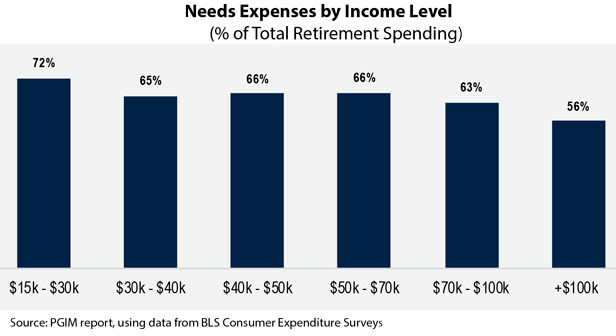 Spending patterns also change over time. In the very early years of retirement, people tend to spend about the same as they spent before retirement. Over time that changes and they spend less overall although spending on health care and housing tends to increase, said Finke.

Also declining over time is financial literacy of retirees, which makes it more difficult to deal with complex financial decisions, said Finke.

Given all these considerations, target date funds, which have become the default and most popular investment option for many defined contribution plan participants “fall short as participants get closer to retirement,” said Jeremy Stempien, portfolio manager and strategist at QMA’s Global Multi-Asset Solutions. Their portfolios don’t, but should, reflect the different asset buckets retirees use to match their spending needs in retirement.

DC plans could include income guarantees such as immediate or fixed annuities or variable annuities with guaranteed life benefits, which is now possible under the Secure Act, or a bond strategy that resembles liability-driven investment (LDI) strategies that pension funds use. Searching for Safety and Security in Retirement