Why Do Some Workers Save Less for Retirement?

The key to saving for retirement may have more to do with spending than savings discipline.

A new joint report from the Employee Benefit Research Institute (EBRI) and J.P. Morgan Asset Management, which looked at 1.4 million households with low, middle and high retirement account savings rates, found that differences in savings rates between the first two groups was due to their differences in spending, not salaries.

The study compared savings rates and spending patterns among employees earning comparable salaries. The 1.4 million households was the population overlap between the 27 million 401(k) plan participant records in EBRI’s database and 22 million JPMorgan Chase customer households. Households with more than one wage earner were excluded because the initial matching was based solely on the primary household member.

Overall, middle savers, defined as the middle 50% of the population studied, save about 3% more of their salary at all ages than the bottom 25% of savers, according to the study. That “difference if sustained overtime could explain the fact the current retirement plan account balances of high tenured middle savers are almost two times larger than those of high tenured low savers,” according to the report. 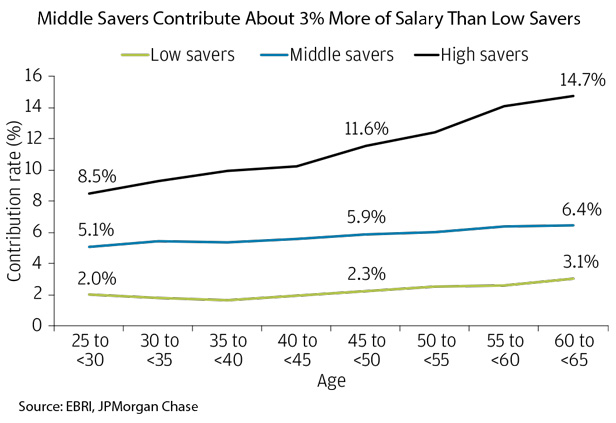 The study found that low savers spent more than middle savers as a percent of salary for housing, transportation and food and beverages across most age groups.

5 Ideas From a Retirement Expert's New Paper, for Annuity Sellers

Spending on education and clothing was similar between the two saver groups overall, and spending on travel was slightly higher for middle savers. 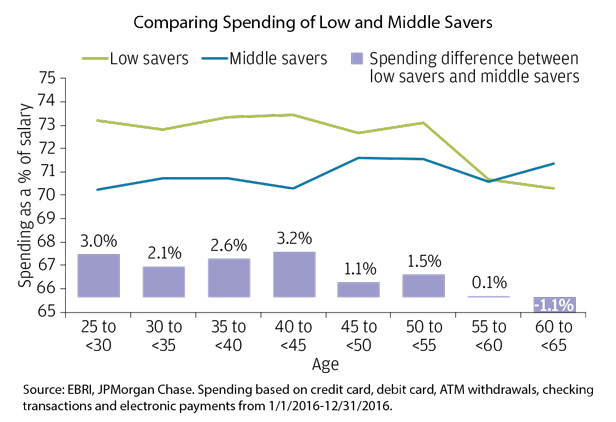 “For the first time we can point to the specific categories of current spending that may be constraining the ability to save more,” write the authors, who include Lori Lucas and Jack Vanderhei from EBRI and Katherine Roy, Kelly Hahn, Je Oh and Livia Salonen from JPMorgan.

That has implications for employers and others who focus on developing programs and strategies to increase employee savings rates. “It remains unclear how adjustable that spending may be,” according to the report.

More research is necessary, and the report notes it has the data to dig deeper. In the future the collaborators at EBRI and J.P. Morgan Asset Management expect to explore the factors underlying these spending patterns and how dual-earner households might differ from single-earner ones.

5 Ideas From a Retirement Expert's New Paper, for Annuity Sellers