Advisor portfolio models sharply underperformed their benchmarks from the stock market’s peak in late February to its trough in late March, but not for the obvious reason.

According to a new report from BlackRock’s latest Advisors Insight Guide, the stock sleeves of advisors’ moderate portfolios were off just 0.4% from their benchmarks, but their bond sleeves underperformed more than 10 times that much, off 5%.

“The typical advisor was overweight credit risk and underweight rate risk — a bad combination in this environment,” according to the guide written by Brett Mossman, head of BlackRock Portfolio Solutions, and Patrick Nolan, a senior portfolio strategist with contributions from Adrian Colarusso, Brian Lawler and Carolyn Barnette. 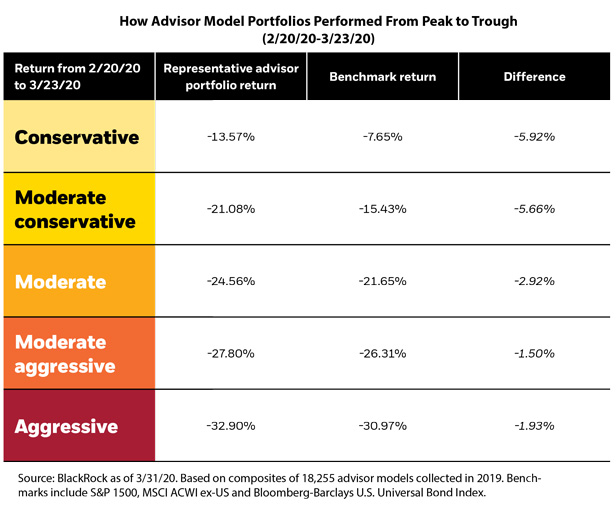 High-yield credit spreads almost tripled from 3.5% on Feb. 20 to over 10% on March 23, causing huge losses, while 10-year Treasury yields fell about a one-third from 1.5% to under 1% during the same time frame, posting gains. 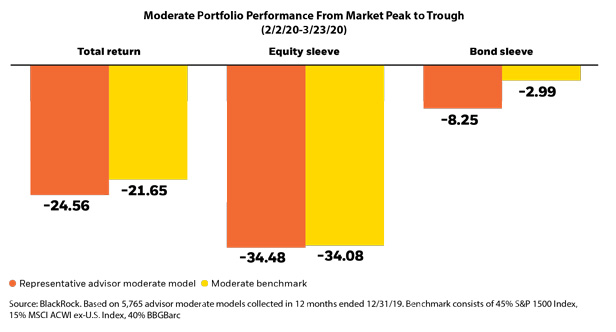 How should advisors reposition client portfolios now, many out of sync with their target weightings? “Doing nothing is not an option,” according to the BlackRock report.

A typical 60/40 stock/bond portfolio was split 50/50 on March 23. BlackRock strategists have several suggestions.

For rebalancing, they suggest that advisors consider doing so not on an annual, semiannual or quarterly basis but on the basis of drift from original target weights. This “threshold strategy,” for example, could adjust weights when allocations drift more than 5% in either direction from their original targets.

The strategy worked quite well during the financial crisis, between October 2007 and year-end 2009, adding almost 1.7% of excess return. Annual rebalancing added even more, 2.87%, but that was due mainly to “fortuitous timing,” according to BlackRock.

“What’s most important — instead of timing the bottom — decide on a rebalancing strategy and stick to it,” according to BlackRock. 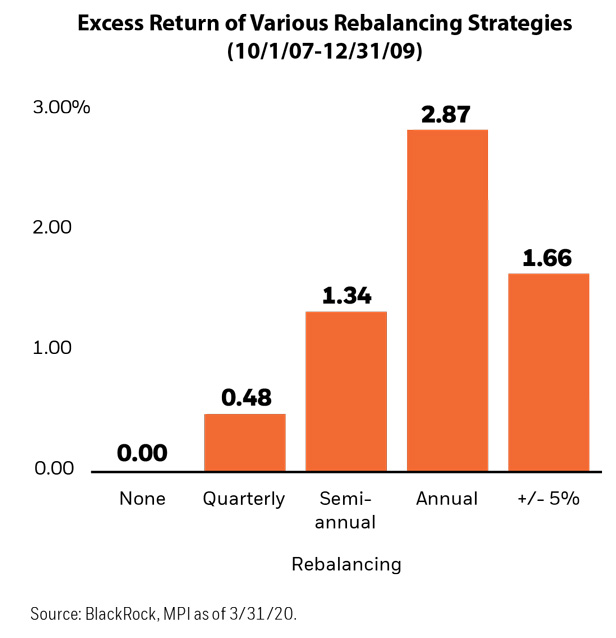 Tax loss harvesting is another step advisors should consider taking now for client portfolios, given the sharp drop in asset prices.

As of March 23, the average model portfolio among the 18,000-plus in the BlackRock’s database held 54% in funds with a negative three-year price return. “Now is the time to identify which holdings in the portfolio no longer have a stay of execution due to their taxable gain status.”

Since they no longer have taxable gains, they are candidates for tax loss selling. First, however, advisors should subtract the positive returns distributed through dividends and capital gains to investors to determine whether the fund has a taxable gain or loss, according to BlackRock.

Should advisors do anything more with client portfolios beyond the usual rebalancing of assets back to original targets? Here again, BlackRock strategists have a number of suggestions.

A reset could include not only the usual rebalancing but also purging “low-conviction holdings” in favor of high-conviction ones, which may be on advisors’ watch lists.

Beyond that advisors could make a bolder move, taking advantage of buying opportunities “to recapture lost ground” or “enhance” long-term results for clients.

They could overweight risk assets like stocks, stressing high-conviction assets, and take sizable positions in a particular ETF or mutual fund they feel strongly about.

Given the likely higher volatility of such a portfolio, it’s recommended only for advisor clients “who can endure the extra risk,” according to BlackRock.

Another possibility for advisors, especially for those who do not expect a return to business as usual, is redesigning a portfolio strategy.

“There are plenty of reasons to rethink the strategic positioning of the portfolio” now, including zero interest rates, widening dispersion among sector performance and the possibility of inflation on the horizon for the first time in over a decade, according to BlackRock.

Pre-retirees and recent retirees especially may want portfolio changes to extend the life of their assets, reducing longevity risk.

In this case, expanding the menu of potential investments to enhance diversification or returns will be key. They could include minimum volatility strategies for stocks, flexible actively managed mandates for fixed income allocations, and alternatives, including investments in private markets.

“A redesign requires that we take a fresh look at the portfolio and ask critical questions about how to best position it for changing objectives and assumptions. The traditional 60/40 may become 50/30/20, with 20% in alternatives or something else.”