Despite the growing number of mutual funds and ETFs, the percentage of female portfolio managers hasn’t changed in twenty years.

At the end of 2019, 14% of fund managers were women, the same percentage as in 2000, according to a new report from Morningstar, based on a global database of more than 25,000 fund managers.

“The gender gap is a chasm in the fund industry,” writes Laura Lallos, senior mutual fund analyst at Morningstar and author of the report, Women in Investing: Morningstar’s View. “The cause is likely a complicated combination of structural barriers and implicit biases. But it has nothing to do with ability.”

A 2018 Morningstar study of fund manager performance found that women were “just as good as men at managing funds.” But their presence on corporate boards and in corporate management is more distinguished, generating stronger share price performance, according to reports from Credit Suisse.

Morningstar’s latest study on gender diversity in the fund industry found that the U.S. lagged other countries in female representation among fund managers. Just 11% of U.S. fund managers were women at the end of 2019 compared with more than 20% of fund managers based in Hong Kong, Singapore and Spain. 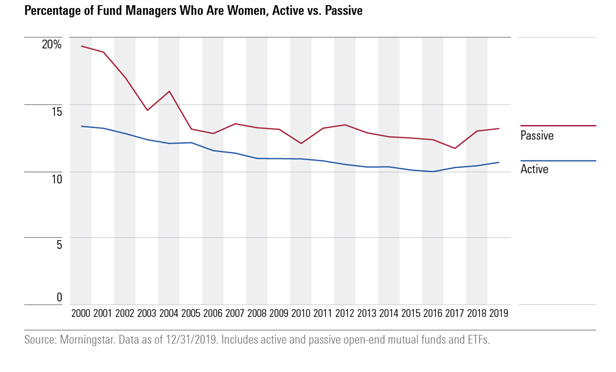 Although a smaller percentage of U.S. mutual funds and ETFs are led by women today than previously, more funds are voting in favor of proxy proposals involving diversity, gender pay equity and workplace sexual harassment complaint governance, according to Morningstar.

Why Nov. 1 Might Be a Smart Retirement Date for Your Older Clients

Thematic Funds Are Hot. But Should You Recommend Them?

During the 2019 proxy season, U.S. fund groups supported disclosure of workplace diversity 72% of the time, led by Pimco (100%), Fidelity (90%) and Franklin Templeton (82%). Support for resolutions favoring disclosure of gender pay gaps and workplace sexual harassment complaints was much lower.

The corporate boardroom, unlike the fund portfolio management suite, is becoming more gender-diverse. The percentage of corporate directors on the boards of most U.S. publicly traded companies — included in Morningstar’s U.S. market index — doubled between 2000 and the end of 2018, from 11% to 22%.

California’s board gender diversity law, signed in September 2018, may have contributed to the increase, according to Morningstar. The law mandates that every public company headquartered in the state have at least one female director on its board by the end of 2019 and at least two by the end of 2021 for boards with five members and at least three for boards with six or more members.

Thematic Funds Are Hot. But Should You Recommend Them?