One of the key highlights from Backend Benchmarking’s third-quarter Robo Report is the outperformance of socially responsible digital portfolios.

Among six SRI portfolios operating for at least one year — each paired with a traditional portfolio from the same firm — four beat their traditional counterpart in one-year performance. The SRI outperformers were from Betterment, Morgan Stanley, TIAA and Wealthsimple, and their outperformance ranged from about 0.6 percentage points (for Betterment) to roughly two percentage points for Morgan Stanley and Wealthsimple.

SRI portfolios from TD Ameritrade and Ellevest underperformed their traditional counterparts — TD because of its excess cash holdings and Ellevest because of the portfolio’s narrower focus on women’s issues rather than a broader SRI approach, says David Goldstone, head of research for The Robo Report.

“For SRI portfolios to outperform they must overcome the increase in costs of the underlying funds,” according to the third-quarter Robo Report. “Although one year is still a relatively short period to judge long-term trends, the comparable performance SRI portfolios is a positive sign for this investing trend if it is shown that investors do not pay a performance premium to consider environmental, social or governance factors when constructing portfolios.” 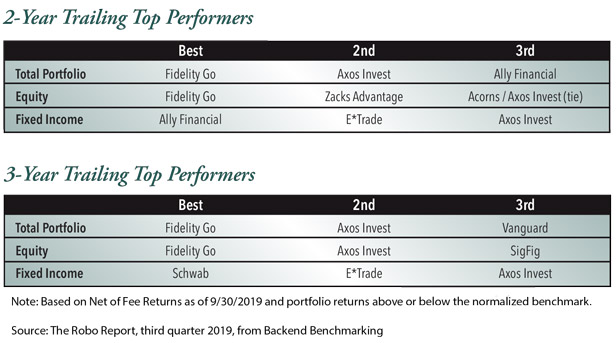 Axos Invest, the renamed WiseBanyan after its purchase by Axos Financial, took second place for trailing two-year and three-year total portfolio returns through the third quarter, also an encore of its performance in the first two quarters.

There were “no significant shifts in Axos Invest’s portfolios since its takeover,” said Goldstone.

The Robo Report performance numbers are based on the performance of portfolios relative to benchmarks that have been adjusted to account for differences in the weight of equity holdings to match the equity/fixed income ratio mix.

In other developments during the third quarter, JPMorgan launched its own digital advisor, known as You Invest Portfolios, requiring a minimum account balance of $25,000 and charging a 35 basis-point advisory fee, and Vanguard began piloting a digital-only planning and investment product called Vanguard Digital Advisor, which will have a $3,000 minimum and all-in fee of 20 basis points.

Vanguard has not yet announced when its Digital Advisor will fully launch, but when it does, its fees will undercut not only JPMorgan’s new digital advisor but longstanding robo-advisors from Fidelity, Wealthfront and Betterment, which all have all-in costs ranging between 33 and 36 basis points.

Wealthfront and Betterment, the other large independent robo-advisor, both announced they had reached $20 billion in assets under management during the third quarter, but Wealthfront’s annual Form ADV filed Oct. 30 shows only $13.6 billion in assets spread over 315,600 accounts. A Wealthfront spokeswoman confirmed that the $6 billion-plus difference is  due to assets in Wealthfront’s high-yielding savings accounts. They are not reported on Form ADV; only investments are, according to the spokeswoman.

Also in the third quarter, SoFi added 529 plan contributions to its SoFi at Work program, which also provides employees at participating companies student loan refinancing services and access to mortgage and personal loans.