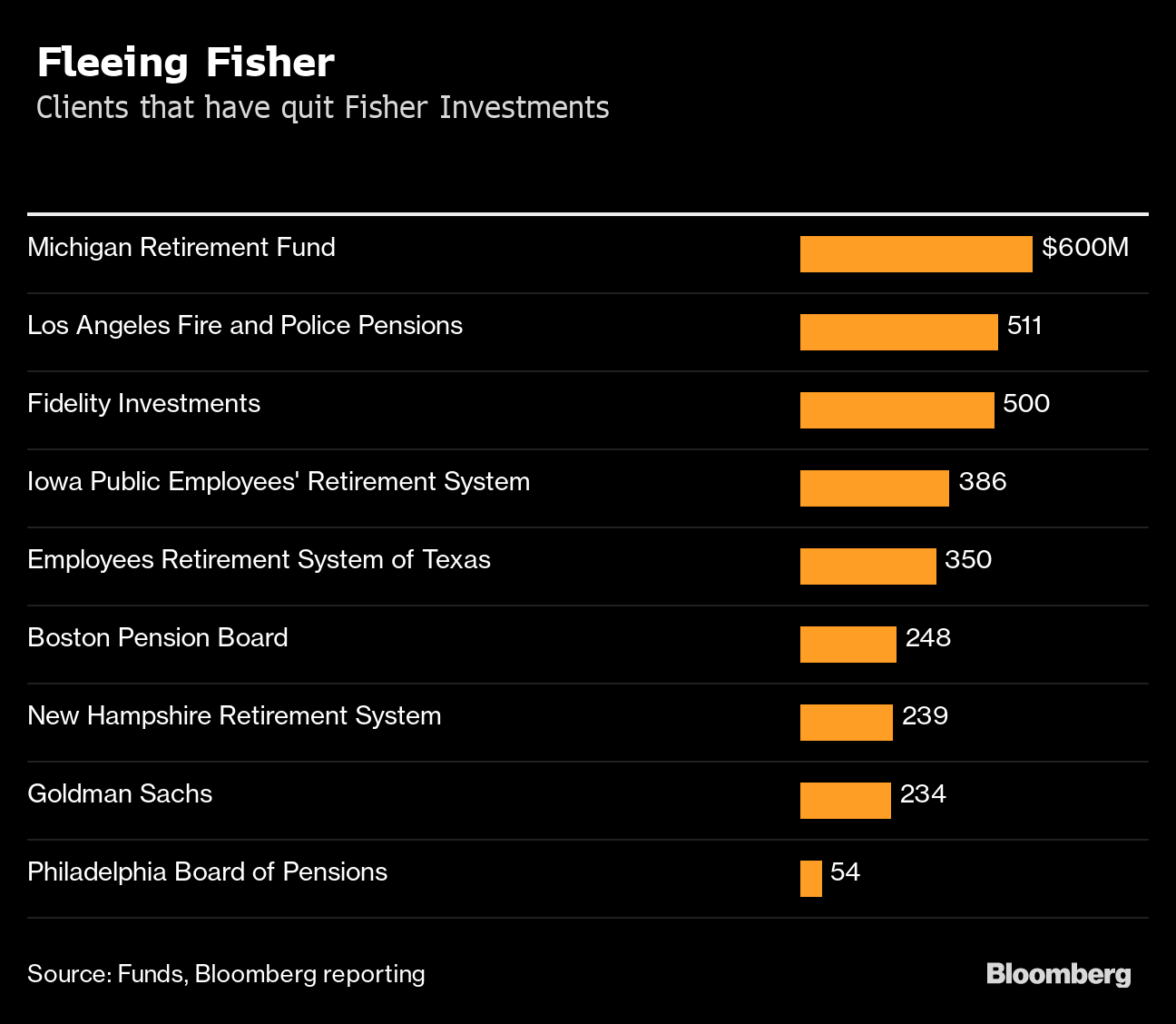 Institutional investors continue to redeem assets from Fisher Investments due to lewd remarks made by its founder and chairman.

The latest group to do so is the Employees Retirement System of Texas, which is yanking some $350 million — a move that brings total reported redemptions to more than $3.1 billion, according to Bloomberg.

“With respect to our fiduciary duty, we are defunding Fisher Investments,” the pension group said in a statement shared with the news service on Friday.

Over the past day, the Los Angeles fire and police pension board and and Goldman Sachs moved to drop Fisher as an asset manager. Other groups withdrawing pension assets from the firm include those in New Hampshire, Iowa, Michigan, Boston and Philadelphia.

Before the redemptions, Fisher Investments managed about $114 billion of assets for institutional and retail investors.

Last week, investment consultancy NEPC — which has some 350 clients — recommended that investors with assets being managed by Fisher end the relationship, Bloomberg reported. Citing a letter Fisher wrote to investors as he came under criticism, NEPC said the response “showed a lack of understanding and appropriate contrition for his behavior.”

Overall, Fisher Investments managing close to $11 billion for 36 state and city entities last year, according to a filing with the Securities and Exchange Commission.

Fisher made the crude comments while speaking at a fireside chat at the Tiburon CEO Summit on Oct. 8. The following day, attendee and advisor Alex Chalekian posted a video on Twitter criticizing the remarks; it has more than 150,000 views.

Afterward, Fisher questioned the negative attention his comments were receiving, before apologizing. He has been barred from future events organized by Tiburon Strategic Advisors.

A woman in the investment business who was present when advisor Ken Fisher made his lewd remarks at an industry event last week has been speaking out recently on the “unchecked bad behavior [that] runs rampant at many financial services conferences.”

Sonya Dreizler, CFP, and head of the consultancy Solutions with Sonya, started sharing “real stories of sexual harassment, assault and discrimination” in the industry in a series of blog posts. Her aim is to for members of the industry “to first continue listening to womens’ experiences to better understand the problem”  before it moves to address them.

In addition, Ellevate CEO and industry veteran Sallie Krawcheck wrote in a blog post this week the financial services business must improve not only its “conference culture” but also its hiring and promotion of women.