The company also touted a new partnership with Fidelity and stressed how its platform can help advisors be compliant with the Securities and Exchange Commission’s Regulation Best Interest rule.

The company’s new Next-Gen Risk Assessment was built on the same algorithms that power the firm’s existing risk questionnaire, and delivers “consistency in rigor in methodology” and results, represents a “revolutionary” step forward in user experience, and also goes further than ever to help advisors educate their clients, Dan Cunningham, vice president of product, said during the Summit keynote that was webcast.

For the thousands of advisors that the company said are using Detailed Portfolio Stats in Riskalyze Premier to “dive deeper into analytics,” Riskalyze announced new features including enhanced benchmarking and a new Portfolio Sandbox tool that it said allows advisors to preview their changes to portfolios prior to making actual changes to a client’s account.

Riskalyze also introduced an upgrade to its search capabilities that it said enables advisors to not just search for clients, but also for model portfolios and individual securities. Advisors can now pull up a set of analytics and metrics for individual stocks, exchange-traded funds and mutual funds, it noted.

Connected Trading Powered by Flyer, meanwhile, makes trading automation a “seamless” experience “for the hundreds of advisors managing billions of dollars in assets” on Riskalyze’s Autopilot service, it said. Connected Trading is an end-to-end trade automation platform for advisors that it said eliminates the need for spreadsheets, file uploads and manual account allocations at each custodian.

The store includes an ever-expanding collection of free and subscription-based models available to advisors inside their Riskalyze accounts, he noted.

The company started in 2008 “as a conversation between friends,” Aaron Klein, its co-founder and CEO, said during the keynote. Those friends were him and McDaniel, he recalled, noting the company’s CIO was a financial advisor in a small California town and, “like many of you, he knew that there was something broken about how we all thought about risk.”

Klein remembered telling McDaniel it was “crazy how the average investor thinks about the concept of risk.” And Klein recalled McDaniel telling him: “If you think that’s crazy, you should see how many of us financial advisors think about it.” There just weren’t the tools in the industry to figure that out and “we used these broken, subjective terms like conservative, moderate and aggressive,” and thought there had to “be a better way,” Klein said.

Riskalyze started in March 2011 with Klein, McDaniel and Matt Pistone, the company’s chief technology officer, working out of the basement of Klein’s house, developing its core technology, the first version of its risk questionnaire, including market data feeds and a quantitative risk engine, “from scratch,” Klein noted.

They decided to analyze risk “the hard way [by] analyzing risk at the securities level instead of the asset class level like everyone else was doing,” he recalled.

After building version 1 of the platform, the company realized it was still complicated and needed a metaphor to make it clearer to customers, he said, noting that’s when they created the Risk Number concept. “When we came out of beta in 2013, you all made this movement take off like a rocket,” he said.

The company later added retirement maps “to assess risk capacity” and stress tests to “help you combat the question ‘why is the market beating my portfolio?’ he said, joking: “I think that question has put more advisors into mental institutions than any other question.”

Riskalyze then entered university classrooms with free access to its platform to teach young people about financial planning, he said.

The company was built up “one advisor at a time” but, in 2015, it “started to see a big increase in enterprise demand and today we partner with 158 broker-dealers and large RIAs, and we do large deployments of Riskalyze into enterprise firms,” he told attendees.

“We are still just scratching the surface of how we can innovate the advisor-client engagement experience,” he said.

In addition to the Fidelity partnership, Lori Hardwick, Riskalyze’s new chairman, pointed to the new Risk Number MyBlocks block that’s part of the expanded partnership between Riskalyze and Envestnet MoneyGuide. Riskalyze also expanded its partnership with RIA in a Box to launch a Client Suitability Tool as an expansion of the latter’s MyRIACompliance software platform, she noted.

The company’s strategy, meanwhile, is to “invest tens of millions of dollars a year into innovation” rather than just focusing on generating larger profits, she said.

Jeff joined the ThinkAdvisor team as a staff reporter in July 2019. Before joining ThinkAdvisor, he was a freelance reporter for five years, covering mainly technology, business, media and entertainment news for publications including The Miami Herald, Newsday, TheStreet.com, Long Island Press and multiple American City Business Journals websites. He also reported for several consumer electronics publications and was a technology reporter for publications of the Media & Entertainment Services Alliance. Prior to that, he worked as a reporter and editor for Consumer Electronics Daily and other Warren Communications News publications for 15 years. He graduated with an MA in journalism from New York University. 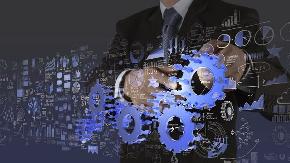 Time for a Portfolio Tune-Up?