By Ranjeetha Pakiam and Rupert Rowling

Gold is extending its rally toward the biggest monthly advance since the U.K. voted to leave the European Union in June 2016.

Prices have surged to the highest since 2013 on expectations for looser monetary policy, rising geopolitical tensions and slower global growth as the trade war between the U.S. and China drags on. Gold’s posting a strong June ahead of a highly anticipated meeting Saturday between Presidents Donald Trump and Xi Jinping in Japan, with investors watching if the two nations will be able to resolve their differences.

Bullion’s gains gathered pace last week after the Federal Reserve opened the door to a U.S. interest rate cut and other central banks also pivoted to a more dovish stance. Because global macroeconomic headwinds are simultaneously gaining intensity, Bank of America analysts including Michael Widmer expect the dollar to decline, further boosting demand for gold and possibly sending the metal to $1,500 an ounce in the next twelve months.

“Bonds and shares at higher — and concerning — levels is another factor, as are fears around trade disputes,” said Michael McCarthy, chief market strategist at CMC Markets Asia Pacific Pty. “The ‘lines in the sand’ for gold are at $1,380 and $1,430. A breach of either of these levels would give an indication of near-term direction. If the meeting between Presidents Xi and Trump is unfruitful, we may see a test of $1,430 next week.” 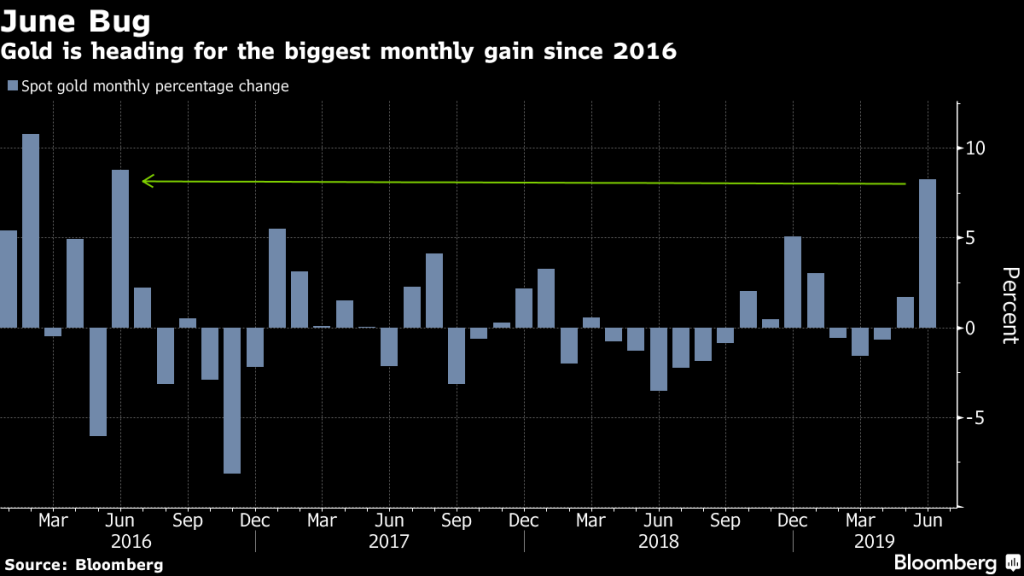 Holdings in gold-backed exchange-traded funds are at the highest since 2013 and have mirrored gold’s price move by also gaining this month by the most in three years, according to data compiled by Bloomberg. A gauge of the U.S. dollar is down 1.7% this month, the first monthly decline for the greenback since January.

The period from the end of 2019 and into 2020 is seen as more favorable for higher average gold prices as rising U.S. inflation drives real rates even lower, Harry Tchilinguirian, head of commodity markets strategy at BNP Paribas SA, said in a note. As the Fed is likely to have made at least two rate cuts by then, “we see a window of opportunity for gold to rally before inflation subsides in second half of 2020,” he said.

Gold’s rally has been further fueled by an escalation in U.S.-Iran tensions and concerns that trade disputes are harming global growth. Trump told reporters at the Group-of-20 summit in Osaka that there was “absolutely no time pressure” in dealing with Iran as European nations pushed to salvage what remains of the 2015 nuclear accord and avert a slide toward war.

The recent surge in price has sparked concerns that the metal may be due for a correction, with the 14-day relative-strength index giving a value of 78. The majority of traders and analysts in Bloomberg’s weekly survey had a bearish outlook.

In other precious metals, silver gained for the first time in four days on the Comex in New York, while platinum climbed and palladium declined on the New York Mercantile Exchange.

–With assistance from Swansy Afonso and Justina Vasquez.