From 100 feet up in the air, Indiana crop duster Robert Sneberger gets a better view than most of how cornfields are faring. This season, the picture is bleak.

Instead of the stretching green stalks he normally sees at this time of year, there’s water. The wettest year in memory has stalled planting and stunted crops in the U.S. Midwest at a time when farmers are already struggling with low prices and a trade war with China.

But they’re not alone. The communities they live in and the businesses that supply them with seeds, fertilizer, equipment and services are struggling as credit conditions steadily deteriorate in a fragile rural economy. At Burrus Seed in Arenzville, Illinois, employees spend as much time trying to lift farmers’ spirits as they do selling to them, according to the owner.

“If we experienced a year like this, I don’t remember it,” said Todd Burrus, whose family has run the company since 1935. “When the farm economy is tough, it’s going to be tough for all the suppliers.”

Another Illinois seed business owner, Kurt Barman, says he’s trying not to curtail employee hours even as customers are returning product because they aren’t able to plant. “All of the seeds are coming back, so that’s lost revenue for us,” he said. The wet weather is presenting farmers with other purchasing dilemmas. Growers are weighing whether to trade up to the latest technology to protect crops and businesses, or use prior versions, according to Mark Patrick, chief financial officer of agro-chemical giant Syngenta AG.

“Couple that with less acres, you’ve got a very acute pressure going on at the moment,” Patrick said in an interview with Bloomberg Television.

The fertilizer business is already feeling the effects. Midwest urea premiums have been running at more than double normal levels. While that’s good news for suppliers, the reason behind the price surge isn’t.

With the Mississippi River closed for much of the past month, the regular flow of crop-nutrient shipments has been disrupted with barges stacked up waiting to move, according to Alexis Maxwell, research director for Bloomberg Green Markets.

Deerfield, Illinois-based CF Industries Holdings Inc. produces urea locally, while Nutrien Ltd. has urea it can bring in from the Canadian Prairies. Overseas providers have been the ones suffering as they try and get their product to the Midwest.

The deluge is just the latest blow to the farm economy. Even the $28 billion in promised tariff aid may not be enough to rescue rural America from the onslaught of bad news.

There’s been a steady deterioration in agricultural credit conditions, the Kansas City Federal Reserve said in its May report. Farmer sentiment has plunged to levels not seen since October 2016, the month before Donald Trump’s election victory, a Purdue University/CME Group index showed this month. Net farm income last year was about half of the $123 billion earned in 2013.

The stalled planting this year only works to exacerbate fragility in rural areas, Curt Hudnutt, head of North American rural banking for Rabobank. “If you want to liken it to the 2008 recession from a housing perspective, it’s similar to that and it’s really vulnerable to any disruptions,’’ he said.

Shawn Kelly, mayor of Missouri Valley, Iowa, says the weather is casting a shadow over the corn-driven local economy, where average incomes are already well below the national average.

“Any time you have a big economic impact from agriculture like that where people can’t get their crops in, there’s going to be less money for people to spend,” Mayor Kelly said.

The deluge has had a far more direct impact on Hamburg. The southwest Iowa town, home to a John Deere dealership, a Manildra plant and Vogel Popcorn, was inundated by Missouri River flooding and has had to take on debt to recover from the devastation and reconnect water and gas supply to homes.

“We used to have a really healthy bottom line,” Mayor Cathy Crain said in an interview. “As of two months ago, we have spent it all and are now living on and operating on borrowed dollars.”

There are some bright spots. Chicago corn futures have rallied about 30% since early May, so farmers that were able to plant and get decent yields can expect better returns, Brad Moffitt, director of market development at the Ohio Corn & Wheat Association, said. 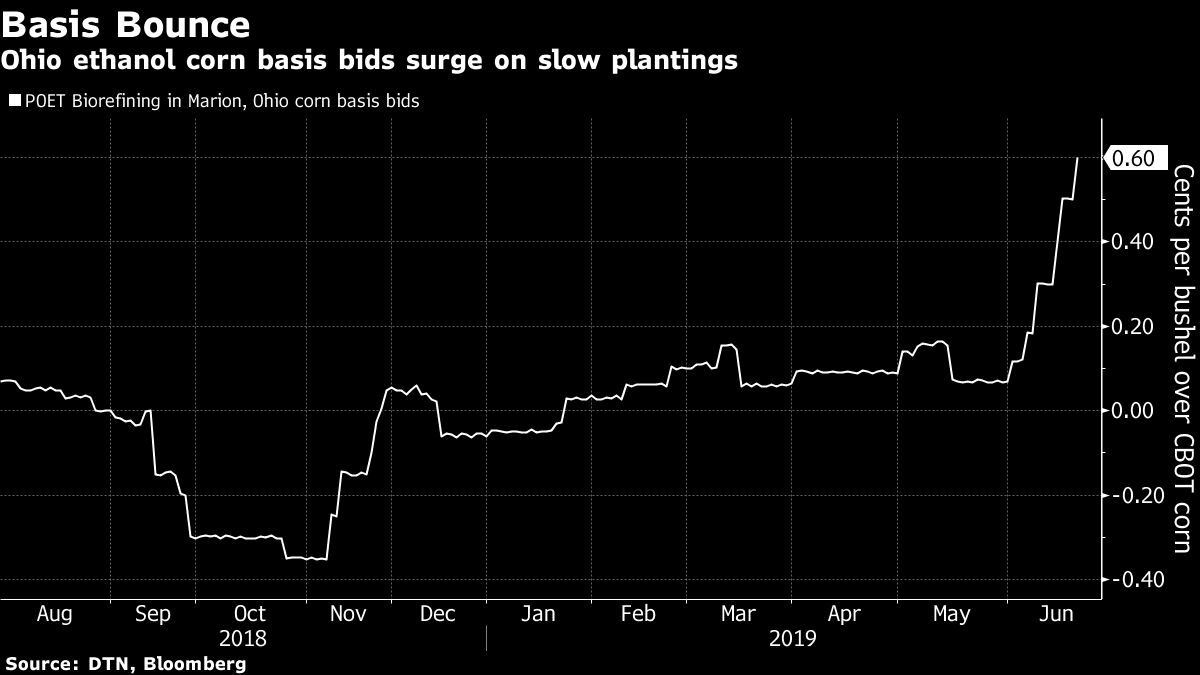 Worries of a smaller corn harvest have prompted ethanol plants and animal feeders to bid more aggressively for supplies leftover from last year. In parts of Indiana and Ohio that had some of the biggest planting delays, so-called basis bids for corn are the highest in years. The basis is the amount below or above futures that buyers are willing to pay.

That means elevators that still have corn can sell at higher prices.

“In terms of the effect on the old crop, both price and basis, it’s been a godsend,’’ Philip Luce, a grain merchandising specialist at advisory service White Commercial Corp. in Stuart, Florida, said by telephone. “Unfortunately, usually you get these prices when there’s a production problem.’’

The reason for this year’s production problem is all too apparent for Sneberger, whose company Aerial Farmer sprays fertilizers and pesticides: “I was just flying over the fields yesterday and I was completely depressed.”

Craig Woodley, a pilot who owns Woodley Aerial Spray in Walnut, Illinois, said he’s trying to figure out how to save money, since he’s still not sure how busy he’ll be this summer.

“It’s a scary picture,” Woodley said. “There’s definitely going to be a lot of lives affected.”