This is ThinkAdvisor’s eighth version of the Advisors Who Serve(d) compilation, and this year we highlight the stories, told in their own words, of 11 veterans in the advisory world.

Advisors Who Serve(d) is just that: Financial advisors who have served or are serving in the military. Each of our compilations have debuted over Memorial Day weekend and been repeated on July 4th and Veterans Day. ThinkAdvisor understands that Memorial Day is meant for those who have died in battle serving in the military not just for anyone who has served, which is Veterans Day, or for those actively serving, Armed Forces Day.

ThinkAdvisor initially chose Memorial Day because it’s when most of America focuses on the military and therefore would give the extra attention to what we feel is an important compilation of stories.

(Check out our Advisors Who Serve(d) page to read stories by advisors from previous years.)

Rank held at beginning of service and at end:  Private 1st Class, ended as 1st Lieutenant

Work you did: Communications specialist for 200

Brief story that stands out from your service time: One of my fondest memories was during a field exercise as a new soldier, our entire field hospital loaded up and drove from Fort Hood, Texas to Fort Polk, Louisiana, to perform a mock wartime field simulation. During the convoy to our destination, as we would pass through many small towns on the way, I could not help being so proud to serve our country, as children and adults of all ages would line the streets as we drove past just to wave at us and show their pride in our country and our service. Serving as an inspiration to others to protect and serve our country is something I will never forget. 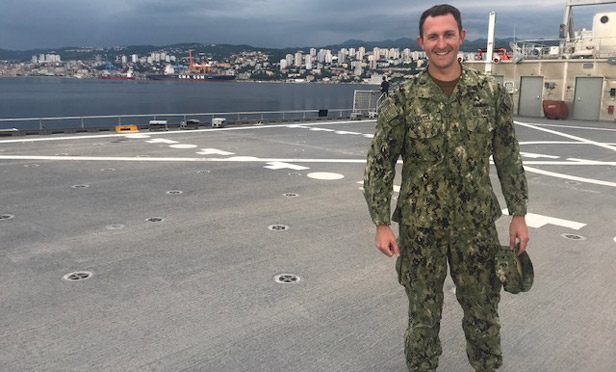 Brief story that stands out from your service time: . I am currently a financial advisor and Navy reservist, and it has been an honor to serve in both capacities. Just three months ago, I returned from an eleven-month overseas deployment.

At the end of 2017, I received a phone call at my office from the Navy informing me that I was being “involuntarily recalled” to active duty for a year-long deployment overseas. The emotions started flooding in. Before transferring to the Navy Reserve I completed 10 years of active duty and a number of deployments, but this time it was different. How would my wife and kids react? What would my clients think? How would my firm and my branch office administrator handle the news, and how would they operate the branch over the next year without me?

However, I knew that this is why I was here as a member of the armed services — to answer the call to serve when called upon, as so many have done before me. The next year was one of the most difficult years in my life, as I left behind a business, my wife, and my four kids. However, it was also one of the most rewarding experiences in my life. My firm, my clients, and friends supported my family and I in so many ways. It was amazing to see the love and support that I received from all of them while I was gone. It reaffirmed my love for both of these careers. Additionally, I was honored to lead an amazing group of sailors into harm’s way, and successfully carry out the missions our nation asked of us. I am forever grateful, to all the people at my firm, and my clients who made this past year a success. It has made me a better Leader, Financial Advisor, Husband and Father.

Brief story that stands out from your service time: In 1987, my FAC team was heli-dropped at the summit of an Italian forest to control supporting air. At the conclusion, we force marched to battalion command post, about 1 mile (direct line of site). In reality, it turned about to be closer to 5-6 miles because of 2-3 additional summits between us and command post. The entire route was through thorn briars!

At the third summit, the last between us and command, was a large clearing. We looked at the clearing with relief, thinking we could get out of the thorns. As we approached the clearing, we noted a single bull, who clearly was not in a mood to share his clearing with us. After being charged at three times … and retreating back into the thorns, we circumvented the clearing. We arrived at the command post about 5 hours after starting, over four hours longer than we were expected to arrive. We arrived with all our uniforms shredded, with countless cuts bleeding trying to explain why we were chased off a hill by a bull. Not as funny at the time as it sounds now

Rank held at beginning of service and at end:  2LT – CPT(P)

Brief story that stands out from your service time:  While stationed in Unterfranken (Northern Bavaria) in Germany, our family developed close relationships with German locals that have endured now for more than 40 years. Our lives and theirs were forever changed as we grew to know each other as people.

Rank held at beginning of service and at end:  Ensign, Lieutenant

Brief story that stands out from your service time: My first ship, the USS LaSalle (AGF 3), was the Sixth Fleet Command ship and was based out of Gaeta, Italy. We were in port Gaeta when 9/11 happened. We immediately were required to get underway and that meant leaving a lot of unfinished business at home. I remember vividly the sense of community of the local Italians and Americans pulling together to support us.

Rank held at beginning of service and at end:  A1C – Sgt

Work you did: Aerial Recon

Brief story that stands out from your service time: Flew 83 combat missions and received four Air Medals. Received a Letter of Commendation from the Commander for intercepting a MIG -25 targeting us while on a mission near Libya. Due to our action we were able to get out of harm’s way in time.

Rank held at beginning of service and at end:  Airman to Sergeant

Brief story that stands out from your service time:  No one person stands out the most to me. I had joined the Air Force after flunking out of college. The Air Force turned my life around where I found my wife in Minot, North Dakota, and went on to get my degree. Had I not joined the service I am not sure where I would be. I extended for one year so I served five years.

Rank held at beginning of service and at end:  Private First Class to Major

Work you did: Officer, Field Artillery and Signal Corps

Brief story that stands out from your service time: Serving as a Captain in charge of communications and coordination for an M1A1 armored battalion deployed from Europe to Operation Desert Storm, it was 8:05 AM local time on February 28th, 1991 and my unit was positioned on the northern border between Iraq and Kuwait. Though we were aware that a cease-fire had been called, we had not yet heard anything official. It was at that moment that I turned on my short wave radio (a Christmas gift from my family) to the BBC and heard President George H. W. Bush addressing the world and sharing the great news that the war was over and our objectives had been met. The emotions that rushed through me as I looked to the east and saw tremendous destruction and the oil wells burning was quite memorable even to this day over 28 years later.

Rank held at beginning of service and at end:  Seaman, Chief Petty Officer

Brief story that stands out from your service time: Rather than share a story, I’d like to remind you that Memorial Day is about honoring those who paid the ultimate price. This piece would better be done on Veteran’s Day.

Rank held at beginning of service and at end:  Sergeant E-5

Work you did: Aircraft Electrician, Paratrooper

Brief story that stands out from your service time:  As a veteran and businessman from Jupiter, Florida, I was selected to participate in the tribute honoring the 75th anniversary of D-Day, which took place June 6, 1944. I believe it’s the opportunity of a lifetime to be a part of history and honor the brave soldiers of the D-Day invasion. This June, a massive tribute will take place in the skies over Normandy, France, and I’ll be among 250 paratroopers from around the world selected to participate in Daks Over Normandy, which will recreate the journey and harrowing mission of paratroopers for the D-Day invasion.

I’ll travel to the United Kingdom on May 30, where I’ll connect with fellow participants, then a few days later board one of 35 C-47’s to cross the English Channel and ultimately recreate the historic D-Day jump into Normandy. During the tribute, paratroopers will be dressed in World War II style uniforms. Having the opportunity to participate in this tribute is an incredible honor. The paratroopers – and all of the soldiers who were part of D-Day – gave so much for our country, with too many making the ultimate sacrifice. It is important that we honor them and remind the world what the greatest generation did to protect our freedom.

I enlisted in the U.S. Army after graduating high school in 1986, and was a paratrooper with the XVIII (18th) Airborne Corps, serving in the Persian Gulf War in 1990-91. Given that it has been more than 25 years since I served as a paratrooper, I’ve been training at the National Parachute Testing Center in Dunnellon, Florida, with over 100 fellow paratroopers from around the world.

Rank held at beginning of service and at end:  Lieutenant

Work you did: Adjutant General Corp

Brief story that stands out from your service time: The Army has acronyms for almost everything. During my basic training, at Fort Knox, Kentucky, I did something that the Drill Sergeant didn’t like. I don’t remember what I did but almost 48 years later I still remember what he yelled at me one inch from my face! He screamed “Bailey! I’m going to hit you in the head with a BFR! I screamed back “what is a BFR Drill Sergeant!? He replied “a big f***ing rock!”

— Check out our Advisors Who Serve(d) page to read stories by advisors from previous years.