A Monk, Who Saw Spiritual Pain in Money Woes, Converts to Financial Advisor

Doug Lynam was a Benedictine monk for 20 years. Now, he advises retirement plans with a fiduciary focus, he tells ThinkAdvisor.

Doug Lynam was a monk. Now, he’s a financial advisor.

And he just wrote a book full of all the lessons he’s learned along the way.

Lynam wrote “From Monk to Money Manager” as a mass-appeal book intended for adults of all ages, religions and political persuasions. Who he really wrote it for is himself, though, he told ThinkAdvisor. The book touches on how to reduce debt, build wealth and invest sustainably, as well as dedicated chapters on taxes, insurance and estate planning.

“I wrote it for myself, my younger self in my 20s. It’s everything I wish I would have known — if I could throw that book into a wayback machine,” Lynam said.

Lynam grew up in what he calls “a pretty wealthy family” in an affluent suburb of Chicago.

“Money was abundant, but it was weaponized. So I tried to run away from the materialistic world and ran away to a monastery in an act of rebellion to annoy my parents,” he said. “And then of course that didn’t work out so well because the monastery went bankrupt. Neither extreme was very healthy.”

Lynam entered a Benedictine monastery in Santa Fe when he was 22, right out of college. The style of the monastery’s religious order was a commitment to being self-sufficient.

While a monk, Lynam worked as a math and science teacher at a private 7th- through 12th-grade school. Despite all the monks working full time, the monastery still didn’t have enough money to pay the bills.

Eventually, Lynam insisted on taking over the monastery’s household finances and discovered the community had been, as he writes in the book, “running in the red for years.” Personal bankruptcy for each monk in the community was the only solution — Lynam helped them file.

After the bankruptcy, Lynam decided to learn everything he could about financial planning and money management to make sure that he didn’t repeat either mistake — the excess of his family or the problems of the monastery.

“Then something curious happened: I noticed that the monastery guests who would come who were in spiritual pain — they were asking for prayers and help — they were actually really in financial pain,” he said. “They asked me to pray for them, and I would, but also I insisted we make a budget. Because God’s not going to work a miracle solving a problem that you have the power to fix.”

For many years then, Lynam worked pro bono as a financial advisor. He found himself helping with a range of issues from “more bankruptcies to probating estates to credit card fraud to child support payments to you name it.”

That was his training ground to becoming the financial advisor he is today.

After 20 years as a Benedictine monk, Lynam left the monastery in 2016 to become a full-time financial advisor. As he writes in the book, he realized that “the most powerful way for me to have an impact in the world was to leave the monastery and advise people about their finances full time.”

“You need licensures and certifications and all that,” he said. “So I took a while to really get trained up and licensed to build the business and get clients.”

He formed his own company, Lynam Financial Services, and then in 2017 merged with a larger firm, LongView Asset Management, which has about $125 million in assets under management.

When he joined LongView, he became director of educator retirement services. He works mostly in the 403(b) space with high-net-worth individuals and institutions. Right now, he works with five institutions as clients.

“People think these retirement plans are broken because people aren’t putting enough money into them,” Lynam said. “There’s plenty of money going into these plans. The plan design is such that it will make the recordkeepers or advisors wealthy and not the plan participants wealthy — if there is no fiduciary duty in place.”

It’s this lack of fiduciary duty that pressed Lynam to start his own business.

“I’ve given up on waiting for Congress or the government to do anything. That’s why I launched my business,” Lynam said. “I’m going to try to take over as many plans as I can, that’s what I’m going to do.”

There’s an overarching theme throughout the book that stresses the importance of fiduciary duty. Lynam calls for the readers of his book to “be sure that every person providing you with financial advice is a fiduciary” and advises them to get this commitment in writing.

Lynam also debuts his idea for an “ESG Fiduciary” designation in the book, as well as announces the launch of a new nonprofit called the ESG Fiduciary Institute.

“It’s devoted to promoting the belief that fiduciary duty and being concerned about the well-being of our communities are synonymous,” Lynam explained. “You can’t invest for someone’s future and destroy their future at the same time. It makes no sense.”

The ESG Fiduciary Institute implements its mission — to promote environmental, social and governance focused investing, as well as fiduciary duty — by licensing the trademark ESG fiduciary designation. Only investment adviser representatives, who work for an RIA, are eligible to become an ESG fiduciary.

“As of June 2018, there were approximately $15.8 trillion invested in employer-sponsored retirement plans of all types in the United States,” Lynam writes in the book. “Shift all that money into ESG-based investments, and we can move the world.”

Making good on his word, Lynam and LongView recently built an institutional retirement plan and qualified default investment alternative (QDIA) for United World College USA that adheres to the traditional fiduciary standards and also invests according to ESG practices.

According to Lynam, this is the first ESG-themed QDIA for a school to be built and implemented while following all the fiduciary criteria set forth by the Labor Department in April 2018. 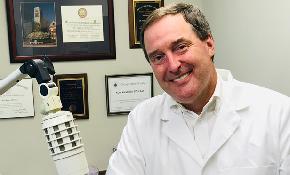 The Identical Twin Advisors Who Broke Away Together

Gregg and Scott Powers of Twin Powers Wealth Advisors tell ThinkAdvisor how they broke away from Wells Fargo to start their own firm. A Lawyer Became an Advisor. Now He Runs 2 Firms.

Michael Garry tells ThinkAdvisor about running an RIA and an estate planning firm at the same time.