Farmer malaise due to trade wars has them running away from Deere. 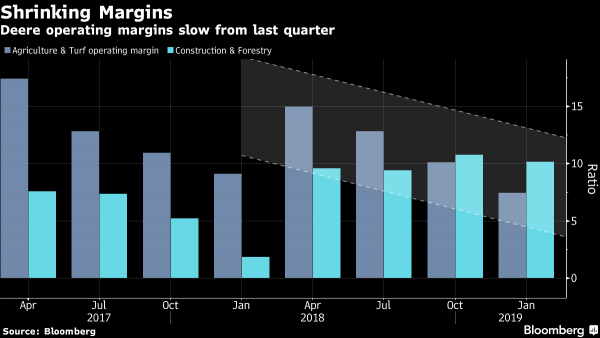 U.S. farmers, struggling with global trade disputes, are getting stingier on spending, and that apparently includes Deere & Co.’s iconic yellow and green tractors and combines.

The world’s biggest agricultural equipment maker reported first-quarter results that missed analyst estimates for sales and profit. Chief Executive Officer Samuel Allen cited worries by farmers struggling with the impact of tariffs and trade spats with China and other nations. Higher costs for raw materials such as steel have also taken a toll. The shares declined in response.

The trade issues “have weighed on market sentiment and caused farmers to become more cautious about making major purchases,” Allen said Friday in a statement.

Amid “unsettled conditions in some of our key markets,” Deere still affirmed its annual forecast.

The Moline, Illinois-based company’s disappointing results come amid signs that the farm belt’s malaise is deepening. The U.S. Department of Agriculture said Thursday that soybean exports would stay below their pre-trade war levels until the 2026-2027 season. That followed a report that sales of the oilseed in early January had the worst week ever. The Federal Reserve Bank of Kansas City also warned that farm incomes were likely to have a weak start in 2019, and that credit was tightening at lenders.

Allen’s comments join a chorus of equipment makers that have been escalating calls for a solution to the trade wars. Hubertus Muehlhaeuser, CEO of CNH Industrial NV, recently said that “the more crazy we get on the tariffs, the more price increases there are going to be.” Executives at Caterpillar Inc., considered a bellwether for the global economy, also called out tariffs after reporting lackluster fourth-quarter earnings.

Still, Deere executives on a call to discuss earnings with analysts were a bit more upbeat about the outlook for 2019 and beyond. Brent Norwood, director of investor relations, pointed to a forecast for recovering crop-cash receipts and government farm aid to show why “soybean economics” for many farmers may improve this year. Trade flow patterns are starting to readjust to the China-U.S. spat, he said.

“Very importantly, global demand for grain is projected to increase again in 2019, bringing supply and demand into a more favorable balance this marketing year and further improving next year with consumption projected to outpace production,” Kalathur said on the call.

Fourth-quarter margins for the agriculture-and-turf segment were disappointing, largely because of higher material and freight costs and a weaker mix, said Christopher Ciolino, an analyst at Bloomberg Intelligence.

Farmers still have to buy to replace aging machines, which is driving demand. Industry sales of agricultural equipment in the U.S. and Canada are forecast flat to up 5%, helped by demand for both large and small equipment, according to Deere. Sales of construction equipment is also helping the company.

“Until we have more visibility on trade, demand will be replacement driven,” Ciolino said. “There is some optimism over the balance of the year.”

Other highlights from the earnings report include:

The company predicts equipment sales will increase 7% in fiscal 2019. “Sales of John Deere construction and forestry machinery have continued at a strong pace,” Allen said. Deere forecasts U.S. farm cash receipts slightly higher in 2019 versus the prior year, due to a boost in government aid.

Copyright 2019 Bloomberg. All rights reserved. This material may not be published, broadcast, rewritten, or redistributed.

Over 10 years, Americans’ sense of financial well-being has soared from record lows, the CPA group finds.