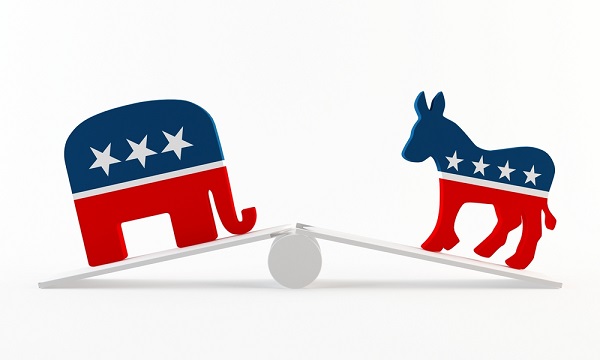 At the same time, Republicans were significantly more pessimistic across every measure tested. Asked what effect the new Congress would have in the following areas, investors who said it would be very or somewhat positive:

An E-Trade poll released about two weeks before the midterm elections showed that half of investors expected the outcome to have a positive effect on their investment portfolios.

Fifty-three percent of Democrats in the new survey said market volatility would increase, compared with 43% of Republicans.

A majority of both parties expected the bull market to end within the next two years, but 25% of Democrats said the end was imminent, compared with 17% of Republicans who thought so.

As to how they planned to reallocate their portfolios, 50% of Republican and 49% of Democratic investors said they would either change their allocations, move into cash or move out of cash into new positions.

“Major events like this are a good time to revisit portfolio allocations — determine what level of risk you can live with, and rebalance accordingly,” Mike Loewengart, E-Trade Financial’s vice president of investment strategy, said in a statement.

“While the outcome of the election returned some certainty to the markets, unknowns still exist at the crossroads of politics and finance, including trade disputes, tax reform and regulatory action, just to name a few. With many pundits predicting that our historic bull run could be coming to an end, any one of these challenges could rattle the market, which is why it’s more important than ever to be well-diversified and focused on the long term.”

E-Trade conducted the online survey from Nov. 7 to Nov. 12 among a sample of 900 U.S. self-directed active voting investors who managed at least $10,000 in an online brokerage account. The panel was 47% Republican and 43% Democratic, and 60% male and 40% female.

The survey also probed voting investors’ thoughts on sector opportunities as a result of the midterm elections. Despite the divergence in overall sentiment, respondents were strikingly united on which sectors stood to benefit.

Both Democratic and Republican investors believed health care was most likely to benefit from the midterm election results. E-Trade noted that the sector soared post-election amid predictions that the proposed repeal of the Affordable Care Act would be taken off the table.

Both groups of investors said the recently beaten-down financial sector was ripe for a comeback post-midterms, as the Trump administration can continue to push deregulation amid a backdrop of rising interest rates.

Both Republicans and Democrats said energy had the potential to benefit from the midterms. Much like financials, the sector has recently come under pressure, but could rebound amid a favorable regulatory environment and a gridlocked Congress, E-Trade said.