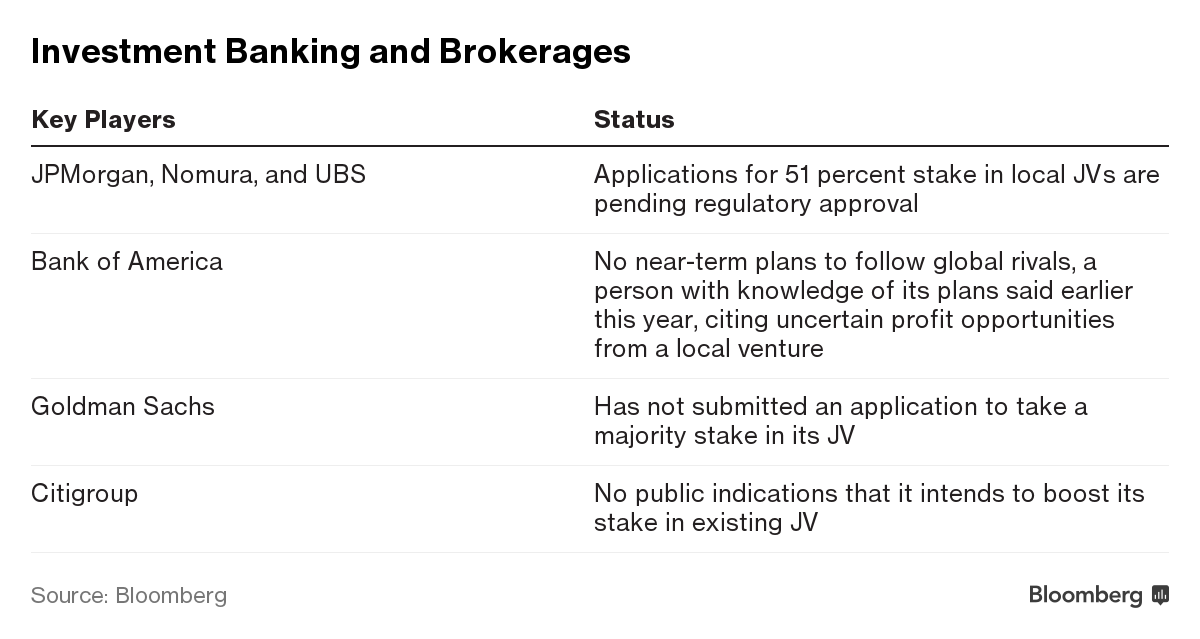 Chinese President Xi Jinping said in a speech last week that the country was “steadily widening the opening up” of its financial industry.

For China watchers, steadily was the key word. Almost exactly a year after the country announced historic plans to ease local ownership rules and entry barriers to what’s now a $45 trillion industry, the pace of change has been closer to a crawl than a sprint.

While Xi signaled that China’s opening remains on track despite the country’s trade war with America, he also made it clear that policy makers will move deliberately.

The world’s biggest financial firms have adopted much the same stance. Even as they applaud China’s opening, many are taking a cautious approach as they weigh the country’s enormous long-term potential against its growing number of short-term challenges — everything from the trade war to sinking stock prices and rising defaults.

“Firms are taking a wait-and-see attitude to see whether they will be able to compete on a level playing field in China,” Mark Austen, chief executive officer of the Asia Securities Industry & Financial Markets Association, said in an interview.

So far, most of the action has taken place in the securities industry. UBS Group AG, JPMorgan Chase & Co. and Nomura Holdings Inc. have all submitted applications for majority stakes in their Chinese joint ventures, according to regulatory filings, and Morgan Stanley and Credit Suisse Group AG are expected to apply.

While Beijing has yet to sign off on a foreign-controlled business under the recently completed rules, the first approval could come soon.

It’s not hard to understand China’s appeal to global investment banks. At $5.6 trillion and $11 trillion, respectively, the country’s equity and debt markets are the world’s third largest.

And their importance will only grow as policy makers move to reduce the economy’s reliance on bank lending. For global securities firms, that means plenty of opportunities for brokerage, advisory and underwriting fees.

But not everyone is eager to jump in. Goldman Sachs Group Inc. has not submitted an application, a person with knowledge of the matter said, in part due to uncertainties around how the new rules will be implemented and the broader business environment amid trade tensions.

Neither Citigroup Inc. nor Bank of America Corp. have indicated that they plan to apply.

There’s been little movement so far on mutual funds, even though analysts expect a number of foreign firms to eventually apply for majority stakes in local managers.

Mutual funds already hold about $2 trillion in China and have lots of growth potential as the country’s middle class gets richer and regulators crack down on a major source of competition for investor cash: the implicitly guaranteed wealth-management products sold by banks.

As for insurance, Bloomberg has yet to find a single foreign company that plans to apply for a controlling stake in China. One factor that may be holding some firms back: their industry is the only area of the financial sector where policy makers have yet to finalize the new regulations.

While China’s new rules have completely removed ownership caps for commercial banks, none have publicly expressed a desire to increase their exposure.

That’s partly because the country’s high minimum-capital requirements make the price of entry prohibitively expensive for all but the biggest international players.

Even if they have the resources to buy into a smaller bank, China’s local governments typically own major stakes in such lenders and are reluctant sellers.

“China won’t let go of its control at major state-owned banks or its grip on the entire banking system,” said Lian Ping, the chief economist at Shanghai-based Bank of Communications Co.

But perhaps the biggest deterrent for international banks, including those that already have a presence in China, is the country’s dearth of short-term growth opportunities.

Not only has China’s debt burden swelled to 266 percent of gross domestic product (bigger than America’s before the 2008 financial crisis), local companies are defaulting on bonds at a record rate and economic growth has slowed to the weakest pace since 2009.

Regulators have been trying to push domestic banks to support private businesses.

“Many foreign banks already have positions, and it would require significant outlays of capital to increase those stakes,” said Logan Wright, a Hong Kong-based director at research firm Rhodium Group LLC. “I don’t know what the motivation would be for anyone really thinking about dramatically increasing those in the next couple of years.”