The number of advisors choosing to break away from their broker-dealer and IBD firms to set up their own shops grew 20% in 2017, according to a new report from Charles Schwab.

The analysis, based on data from the Securities and Exchange Commission, shows that new RIA registrations reached 238 in 2017, up from 199 the previous year and capping a 59% jump since 2013.

(Related: How (Not) to Name Your Advisory Firm)

Generally only advisors who have at least $100 million in assets under management must register with the SEC. Advisors with fewer assets register with state securities authorities. 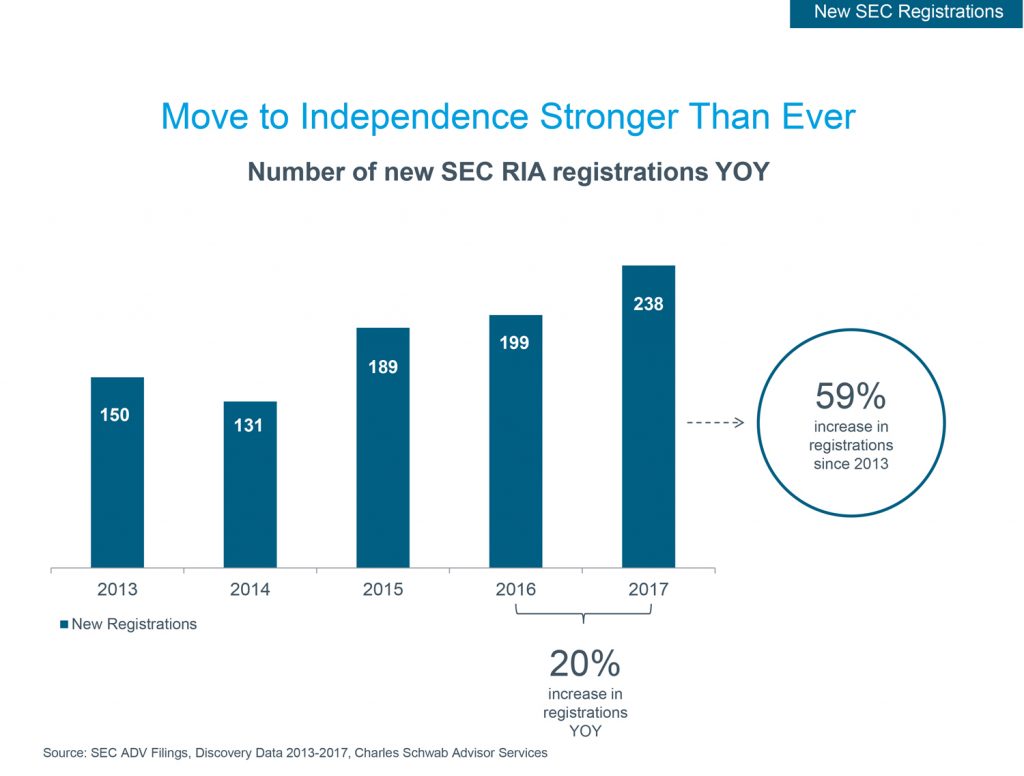 Another characteristic of the newly registered RIA firms in 2017: 64% choose to use a single custodian while 29% choose multiple custodians. That’s similar to the breakdown in 2015 but up from 55% and 34%, respectively, in 2016.

It’s not clear whether the trend of increasing breakaways will continue given that a number of BDs, including Morgan Stanley and UBS, have dropped out of the broker protocol which has eased the way for advisors to go independent. The announcements of those decisions  may have inspired some advisors to leave their firms before they officially left the protocol.

Morgan Stanley, for example, lost 47 advisors in the fourth quarter of 2017 — more than in any other quarter that year — which some attribute to the firm’s exit from the broker protocol that quarter.

John Beatty, senior vice president, sales and relationship management at Schwab Advisor Services, isn’t so sure that the rising trend of breakaways from broker-dealers and IBDs will slow.

“We continue to see firms and individual advisors pursuing independence,” he tells ThinkAdvisor. “Where there’s a will there’s a way… Non-protocol transitions have been a part of this movement over time.”

He recommends that any advisor looking to leave his or her firm review their employment contracts first, whether the firm participates in the protocol or not.

— Check out How to Start Your Own RIA Firm on ThinkAdvisor.