State Street to Vote Against More Directors at Male-Only Boards

By Andrea Vittorio and Jeff Green 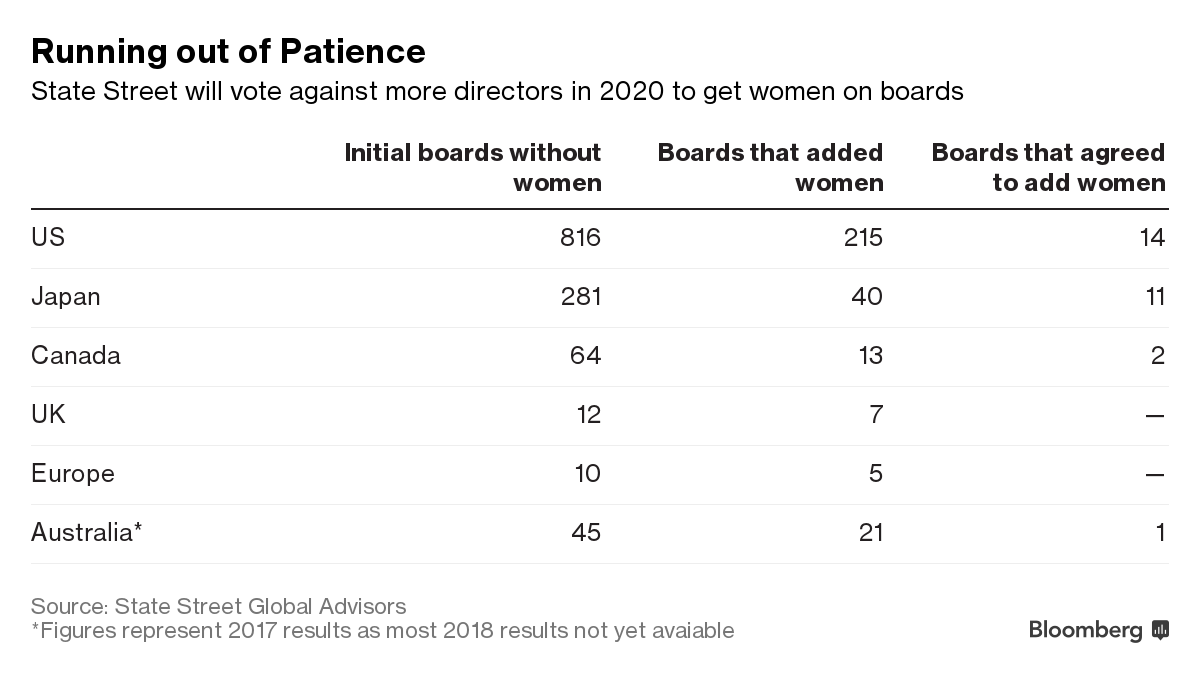 State Street says it’s running out of patience with the nearly 1,000 companies around the world that haven’t yet responded to pressure to add at least one woman to their boards of directors.

The Wall Street bank has already voted against more than 500 chairs of nominating committees on boards without women in each of the last two proxy seasons, State Street said in an update Thursday.

Starting in 2020 in the U.S., U.K. and Australia — and 2021 in Japan and Canada — the bank says it will expand the pressure and vote against all members of a company’s nominating committee.

“We want them to know that we’re watching,” Rakhi Kumar, who leads environmental, social and governance investment strategy and asset stewardship at State Street Global Advisors, said in an interview. “We know who you are. You have another year to be quiet, after which there are consequences to not engaging with us.”

The company signaled a shift in its approach to getting companies to increase diversity in 2017 when it unveiled the Fearless Girl statue on Wall Street and said it would start voting against directors, not just talking to them. BlackRock Inc. is also stepping up pressure on companies to add women to their boards.

In the U.S., advocacy from State Street and other investors has helped drive the percentage of companies in the Russell 3000 index with men-only boards to 16 percent at the end of June from 24 percent in 2016, according to Institutional Shareholder Services Inc.’s data arm.

So far, out of 1,228 companies identified globally by State Street that lack a female board member, 301 have added a woman and another 28 have committed to do so, the bank said in in the update.

Kumar said State Street wanted to allow three years from the start of the Fearless Girl campaign before voting against more directors so that boards had enough time to look for female candidates.

“If in three years you haven’t found somebody, you’re probably not going to find them because you don’t want to find them,” she said.