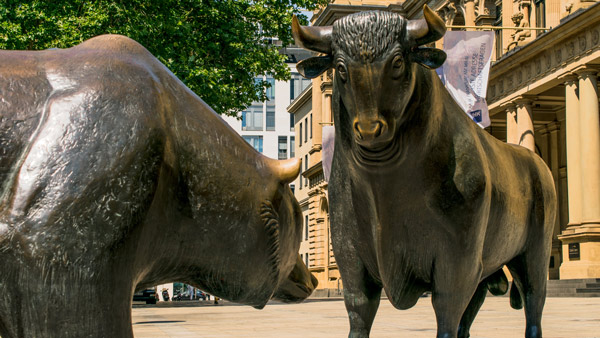 The reason: Excess liquidity, created by central bank quantitative easing around the world, is ending, along with the excess returns it helped create — returns that drove the longest bull market in history.

Central bank “policy stimulus has peaked,” after $12 trillion of asset purchases and 713 interest rate cuts, according to Harnett.

Asset purchases by the Federal Reserve, Bank of England, Bank of Japan, European Central Bank and Swiss National Bank combined, for example, have fallen fell from $2.3 trillion in 2017 to $300 billion today and are projected to be $200 billion next year, according to Hartnett.

But among those central banks only the Fed and Bank of England are now raising rates.

“The Fed is now in the midst of a tightening cycle, ignoring structural deflation, focusing on cyclical inflation,” writes Hartnett. “Until this Fed hiking cycle ends, we suspect absolute returns from financial assets will remain slim and volatile.”

That’s a big change from what followed from Fed easing policy.

“Excess liquidity has been wonderful for asset prices: U.S. junk bonds have annualized an 18% return, U.S. equities a 19% return since their 2009 lows,” writes Hartnett. “U.S. equities are on course to outperform U.S. Treasuries for a seventh consecutive year, the longest streak since the 1922-1928 period.”

Now Hartnett says “a much more hawkish-than-expected Fed is the most likely catalyst for fresh losses across asset markets.”

The “profit outlook has become more negative for risk assets,” says Hartnett, noting that global EPS growth is now 16%, down from 22% in February and global stock prices are off 7% year-to-date excluding U.S. tech stocks.

Global debt levels are higher, bulging at $247 trillion, up 44% from 10 years ago, and include more than double the level of corporate and emerging market debt that existed before the global financial crisis.

In addition, the number of people 65 and older is growing rapidly, slowing the growth of the world’s working population. This so-called “silver generation” is expected to more than triple from 600 million today to 2.1 billion by 2050.

Hartnett suggests that investors own global defense stocks as well as tech and cybersecurity as the “national security champions” over the next 10 years and invest in the themes of inequality, innovation and immortality. That translates into industries that benefit from higher wages and government spending; tech, robotics and cybersecurity software services and consulting; and pharmaceutical, financial and senior living/managed care companies.

— Check out Recession Not Likely for at Least Another Year on ThinkAdvisor.