Social Security was designed to provide more generous benefits to lower income earners relative to their pre-retirement earnings than to higher income earners, but that progressivity is declining.

According to a new brief from the Center for Retirement Research at Boston College, the larger increase in life expectancy of recipients with higher incomes and more education compared to those with lower incomes and less education has widened the gap between the amount of Social Security benefits each cohort receives over their lifetimes.

The longer one lives, the more benefits they will collect, which reflects in large part their better health. Higher income earners tend to be healthier than lower income earners although the report notes that it’s not clear whether their “improved health outcomes” are due to better medical care, healthier behaviors or stronger health throughout their lives. 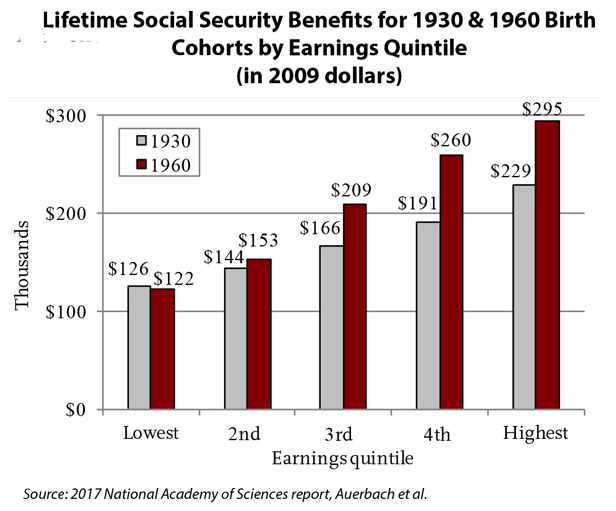 Another contributor to the widening gap between the benefits received by each group relates to the amount of contributions by each group. The current payroll tax that funds Social Security is capped at $128,400, which means that high earners pay a lower average tax rate than lower earners, notes the CRR report.

Despite its fundamental findings, the report also includes a silver lining, citing research that shows lower income earners living longer if they reside in areas with relatively higher median home values, higher local government spending and a higher percentage of college graduates. Income disparity in these areas is also greater, however.

— Check out Ric Edelman: Retirement Crisis Is 14 Years Away on ThinkAdvisor.