A few months ago, I cautioned that Americans should be patient before deciding what effect President Donald Trump’s tax cuts have had on the economy. It takes a while for companies to make investment decisions, more time for those decisions to be implemented and even more time for the resulting changes in labor demand to bid up workers’ wages. It therefore takes months or even years before the full impact of the tax bill will be known.

But it’s also important to evaluate policies like Trump’s tax reform as quickly as possible. Not only is this critical for deciding whether to change course, but as more time goes on, the effects of a policy can become harder to assess. Two years from now, plenty of other things will have had time to affect the economy, including Trump’s trade war and natural economic forces. And now that the tax cut has been in effect for a half-year, the results are starting to trickle in.

First, the tax reform hasn’t yet resulted in appreciably higher wages for American workers. Real average hourly compensation actually fell in the first quarter after the tax reform was passed: 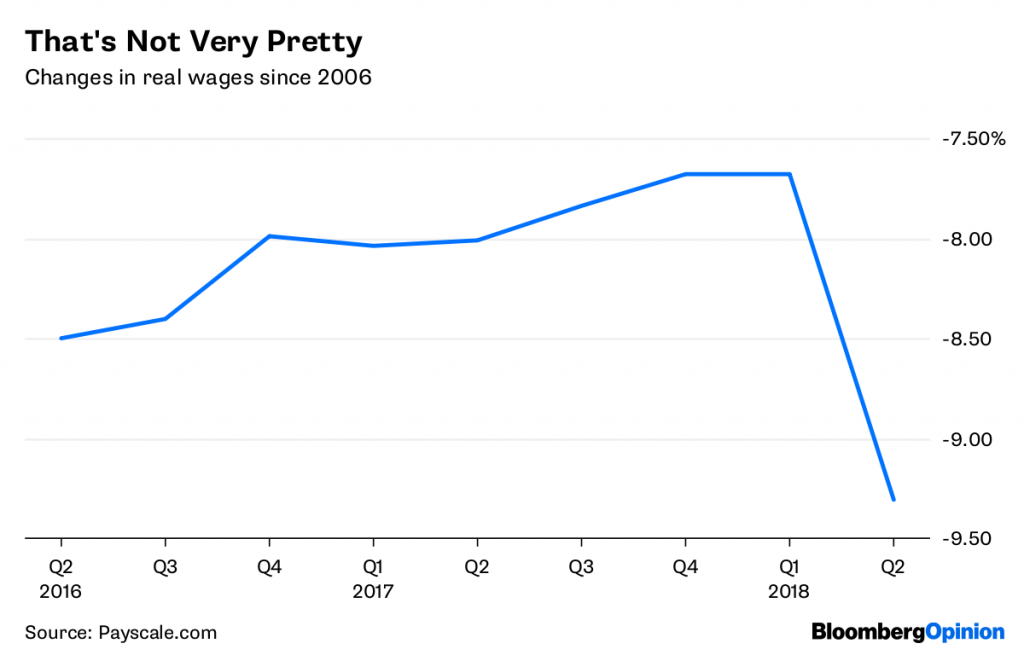 But perhaps two quarters is too early to expect results in this area. A better gauge might be business investment — if the tax reform is spurring businesses to increase capital expenditure, as it was supposed to do, then wage increases will probably follow in due course.

Some have expressed dismay that stock buybacks seem to have taken precedence over boosting capital investment. Since the tax cuts passed, companies have been using buybacks to return record amounts of cash to shareholders — more than $700 billion in the first two quarters. That naturally raises the possibility that companies don’t have good projects to invest in. If companies pass their tax windfall on to shareholders, those investors can choose to react by increasing consumption — meaning more of society’s resources go to the wealthy. They can also choose to invest the money in other companies with better growth prospects — but if those companies are also reacting by returning the money to their shareholders, rather than making capital expenditures, not much is getting accomplished.

So is any of the tax-cut windfall being used to finance the capital expenditure that the economy needs? Private nonresidential fixed investment did increase as a share of the economy in the first two quarters since the reform was passed:

But the level still remains below the high set back in 2015.

Huge, immediate gains for wealthy shareholders combined with tepid increases in business investment and decreases in real wages don’t paint a flattering picture of the tax cut’s impact so far. There is, however, a possibility that the tax cut has acted as a Keynesian fiscal stimulus, helping to push down unemployment.

The Future of Annuities Brings Opportunities for Advisors

Who Caught Aaron Judge’s Home Run Ball? Someone Who Needs a CPA

But that’s not exactly the long-term structural improvement that the bill’s supporters advertised. And as a recent research note from the Federal Reserve Bank of San Francisco points out, fiscal stimulus in good economic times is less effective than in recessions. And growth hasn’t really sped up either — real per capita gross domestic product growth was only 1.34 percent in the first quarter, below 2017’s pace, and considerably less than in 2014 and 2015:

This tepid rate of growth means that the tax cut is unlikely to pay for itself. By this point, almost all economists recognize that income tax cuts no longer stimulate the economy enough to reduce deficits, as supply-siders thought they would back in the 1980s. But economists still held out some hope that lowering the corporate tax, which is believed to be more harmful than the personal income tax, would have a more salutary effect on the budget. Unfortunately, that hope appears to be fading, as fiscal deficits increase rapidly.

There’s still the possibility that Trump’s tax reform will bear fruit in the long term. But early results are pointing to another possibility — that tax cuts have run their course as an economic policy.

In the postwar period, with top marginal income tax rates at more than 90 percent, it made sense to cut taxes as a way of improving the economy’s long-term health. A series of big tax cuts, under presidents Lyndon Johnson and Ronald Reagan, might have boosted economic activity in their day. But the later tax cuts by George W. Bush were followed by years of underwhelming growth, implying that income taxes were no longer doing much damage to economic efficiency.

Corporate taxes were really the last hope for the tax-cutting strategy. But if even that doesn’t provide more than a small momentary fiscal stimulus, then we’ve reached the end of that approach’s usefulness.