Unassuming in manner, striking in achievement, former pro-tennis player Dan Goldie manages client assets of $845 million in his unusual RIA practice. He does it with no employees, no marketing, no financial planning or trading software and using only passive vehicles largely from a single fund family, the FA told ThinkAdvisor in an interview.

As a tennis star, he beat Jimmy Connors; and in his 5-1/2 years as a pro — ranking #27 — won four titles and reached the Wimbledon quarterfinals. But shin stress fractures forced his early retirement at age 27.

Fortunately, the foresighted athlete, raised in McLean, Virginia, always had a back-up plan: a career in financial services. And he put it to work as soon as he exited the courts in 1991. With an economics degree from Stanford University — which he’d attended on a tennis scholarship — he reinvented himself as a self-employed RIA affiliate of Loring Ward.

Twenty-seven years later and boasting a diverse book, Dan Goldie Financial Services, in Palo Alto, California, has an account minimum of $1 million and charges a declining 1% of assets.

After two decades practicing solo, within the last few years Goldie took on two FA partners, both independent contractors. He now plans to add more advisors under his banner in the not-too-distant future.

In 2015, Goldie returned to the tennis courts and won 50-plus singles titles. The RIA hadn’t touched a racquet in 24 years.

Here’s how discipline and a notable athlete’s work ethic helped Goldie, 54, succeed on and off the courts:

THINKADVISOR: You have a most unusual practice! 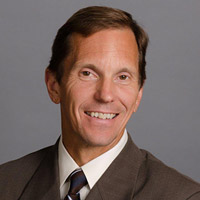 DAN GOLDIE: I’ve heard that. It’s all by design.

No. I have nobody.

How is outsourcing all back-office and administrative functions to Loring Ward advantageous to you?

It frees me up tremendously to focus on my clients. I don’t have a staff to oversee. I don’t hire or fire anybody. It’s very efficient, and it makes life a lot easier.

To what degree do you rely on advanced technology?

With no employees and just you and partner Dirk Gilliard working in the office — David Magnuson, your other partner, is based in Burlingame, California — the space you have must be small.

No, it isn’t. The condominium I own has a suite big enough to hold half a dozen people. There are five offices. So if I have more advisors in the future, the space is available.

Is that a plan?

I think it is. Over the next decade, I might add one or two more advisors. It’s good for succession planning.

Does being a former tennis star help attract clients?

It differentiates me from other advisors. I stand out a little. So it’s an interesting talking point. When a financial advisor is unique in some way, it’s memorable.

What do you do in the way of marketing?

Nothing. It’s essentially all word of mouth. I did write a couple of books that attracted quite a number of clients. With “The Investment Answer” (Business Plus 2011; co-authored by Gordon Murray), I got so many inquiries that I took on Dirk to help me.

Why did you quit tennis?

I was burned out from tennis and frustrated with my [shin] injuries.

Does having played pro tennis help in your work as an advisor?

It definitely helps quite a bit in terms of the discipline and work-ethic lessons I learned. All the things that allow one to be a successful athlete translate into other areas.

What’s your approach to investing?

Passive investing in diversified global portfolios. We mostly use only Dimensional Funds [mutual funds], which I’ve been using since I started. They’re the best vehicles for my approach: asset-class investing. It has limited downside compared to more aggressive, concentrated approaches.

Why did you decide to become an advisor?

I was always fascinated by the way the financial markets worked and their competitive nature. I studied economics in college and thought that someday I’d go into trading, money management or advising. Also, because I grew up partly in [very modest means], I place a lot of value on financial security. I especially enjoy helping people to be financially secure.

You were a solo advisor for 20 years. How come you decided to partner?

It allows me to have a succession plan. It’s easier when you have people taking over your practice. When “The Investment Answer” became a New York Times [Advice] bestseller, I couldn’t handle all the inquires myself. Dirk [joined me], and I passed on a lot of potential new clients to him.

Do all three partners work together?

No. Dirk and David manage their own client bases. We keep the revenue separate. But because they’re using my business name and I’m coaching them a little, we have a revenue-sharing arrangement. We all have our own clients, though we use the same back office team.

Do you ever help out one another?

If necessary, we work as a team: When I need legal advice for a client, David, who’s an attorney, will help me. I have more financial planning experience, so I help him in that way.

Why do you intend to add partners?

It’s good to have more people to grow the business. It’s more fun. I make a little bit more money because of revenue-sharing. And I really enjoy helping other advisors start their businesses.

What’s the biggest challenge to having a financial advisory?

The hardest thing is attracting new clients.  With me, they come onboard slowly, and I’ve built the business up over time. I’ve retained my clients at a very high rate.

What’s the biggest secret to your success?