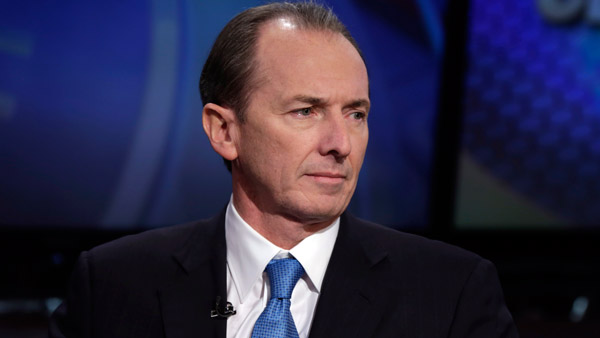 James Gorman doesn’t want people getting ahead of themselves after his bank’s record quarter.

When Wells Fargo & Co. analyst Mike Mayo noted that the bank’s return on equity in the quarter already surpassed the goal it set just three months ago, Gorman reminded him that things can change quickly.

Morgan Stanley posted a 15 percent ROE in the first quarter, higher than the medium-term target of 10 to 13 percent it set in January.

The bank’s revenue rose past $11 billion for the first time ever as it beat analysts’ estimates for stock trading, fixed income and investment banking. The firm’s shares rose 2.4 percent at 10:10 a.m., the biggest jump for any of the six largest U.S. banks on their earnings day.

Gorman noted that not all metrics were a standout.

“The underwriting calendar was not phenomenal,” Gorman said. “Wealth management transaction activity was extremely light, we had very few gains in the investment portfolio, we’re managing expenses strongly but not ruthless. There are things we can do clearly to drive returns higher.”

Earlier, Chief Financial Officer Jonathan Pruzan said in a telephone interview that some results can be prone to seasonality. In recent weeks, geopolitical risks “shifted” client dialogues, he said.

The bank’s own analysts warned on Tuesday that investors need to prepare for downside as the end of the economic cycle is near.

— With assistance by Jennifer Surane