On Medicaid-Compliant Annuities, How to Stay Within the Lines

When a married client requires long-term care, the healthy spouse will worry how to pay for that care and her own living expenses.

When a married client requires long-term care, the immediate worry is how the healthy spouse will manage to pay for both the ever-rising cost of long-term care and his or her own living expenses. Fortunately, the Medicaid qualification rules have evolved to permit the healthy spouse to receive income from an annuity product without jeopardizing the unhealthy spouse’s Medicaid eligibility.  The rules governing the use of Medicaid-compliant annuities are strict, however, and the prevalence of state challenges to these annuities in recent years makes it critical that the client’s annuity precisely satisfies the applicable requirements in order to prevent a loss of Medicaid eligibility.

A Medicaid compliant annuity is simply an immediate annuity that a client purchases in order to allow his or her spouse to qualify for Medicaid assistance.  Medicaid-compliant annuities are typically useful in situations where a client is married and the two spouses are in unequal health positions. They serve to ensure that the healthy spouse—known as the “community” spouse—has sufficient income, while allowing the second, less healthy, spouse to qualify for Medicaid assistance in paying for long-term care expenses, typically within a nursing home.

Rather than treating the purchase of the annuity as an impermissible transfer of assets in order to meet Medicaid’s means-tested eligibility requirements, the federal Deficit Reduction Act (DRA) treats the purchase as a permissible investment, and the annuity payout stream as shielded “income” of the community spouse (rather than as an asset that would be counted in determining eligibility).

This technique allows the community spouse to use funds in excess of the Medicaid-permitted resource allowance to purchase an annuity that provides additional income for the remainder of his life expectancy.  This is important, because states strictly limit the resources that the community spouse may keep and still allow his or her spouse to qualify for Medicaid.

Despite this, some states states (including Ohio and Pennsylvania) have challenged these annuities in recent years, potentially making it much more difficult for a client using an annuity to qualify for Medicaid.

When Is an Annuity Medicaid-Compliant?

Finally, the state must be named as the remainder beneficiary on the annuity contract, allowing it to receive up to the amount that it has paid for the institutionalized spouse’s long-term care.

Satisfying these requirements is important because, in a situation where one spouse requires long-term care and the other remains in his or her home, the assets of the healthy spouse are counted—up to a certain level—in determining whether the institutionalized spouse qualifies for Medicaid. However, the healthy spouse’s income is not counted.

While a Medicaid-compliant annuity can provide a valuable solution for many clients who require long-term care assistance, the usefulness of the strategy will depend upon the state in which the client lives—as many states have attempted to block the use of annuities by Medicaid-eligible individuals.

For previous coverage of Medicaid compliant annuities in Advisor’s Journal,  and for in-depth analysis of the Medicaid resource rules, see Advisor’s Main Library.

Your questions and comments are always welcome. Please post them at our blog, AdvisorFYI, or call the Panel of Experts. 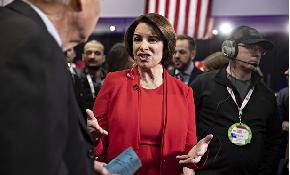 Another contender, Bernie Sanders, talked about how he'd help insurance sector workers cope with Medicare for All.