Job cuts and shrinking bonuses dominated headlines from Wall Street this year, so it’s easy to forget pockets of the industry are booming. Plunging oil prices, the Federal Reserve’s first rate increase since before the financial crisis and the collapse in junk-rated debt are creating opportunities for some bankers and traders, spurring hiring and raises.

Analysts, recruiters and executives deem these are the best eight jobs to have in 2016:

Top-producing financial advisers have never been more in demand. The steady revenue and cross-selling opportunities of wealthy clients are highly valued by banks grappling with higher costs for trading businesses. “Big teams are worth paying for because they tend to bring everything when they move shops,” said Mark Elzweig, a New York-based executive search consultant. Bank of America Corp., Wells Fargo & Co. and JPMorgan all have said they’re hiring in wealth management. With European firms pulling back from the U.S. and advisers’ previous retention deals winding down, more teams could be in play next year.

Investment bankers advised a record $4.2 trillion of announced mergers and acquisitions in 2015, led by blockbuster deals in pharmaceuticals, telecom and technology companies. Which industry is ripe for the next wave of consolidation? Battered by oil’s plunge, energy companies will need to lean on bankers in 2016 to shore up equity or sell themselves to stronger rivals. “When an industry blows up, you usually get a couple of really good years,” said Brian Foran, a partner at Autonomous Research LLP. “It’s similar to banks in 2008 and 2009, when you had some of the biggest acquisitions ever and it was phenomenal for financial institutions bankers.” 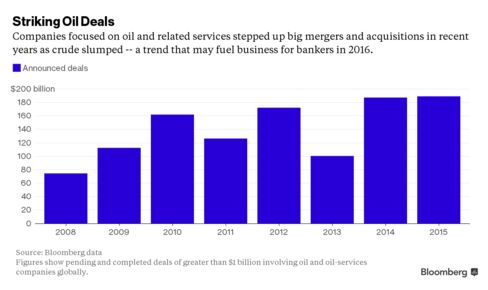 Rising defaults, widening spreads on high-yield debt and climbing U.S. interest rates mean restructuring desks have a big year ahead, according to Vincent Hung of Autonomous Research. Those bankers advise debtors or creditors when companies need restructuring through asset-sales or in bankruptcy. Boutiques including Houlihan Lokey Inc. and Lazard Ltd. dominate the field (megabanks are more often conflicted as creditors or underwriters), and the firms could see a 24 percent jump in restructuring revenue next year, Hung said in a Dec. 18 note.

Rates traders already are poised for some of this year’s biggest raises, with those handling options due for a 15 percent increase on average, according to recruiting firm Options Group Inc. Trading government bonds and related instruments should remain strong in 2016 as the Fed tightens monetary policy while the European Central Bank loosens it, JPMorgan Chase & Co. Chief Financial Officer Marianne Lake said this month. “You finally have an outlook where major central banks are going in different directions,” Foran said. “That just creates a lot of activity.”

Banks need traders and quants to improve platforms that help clients make and manage bets across multiple assets and markets, said Jessica Lee, an Options Group director. “A lot of hedge funds have done a better job than banks at integrating electronic platforms to trade cross-asset,” Lee said. “You have people at high-frequency trading platforms who’ve never worked at a bank who are actually going to banks now.” Those who jump from hedge funds can typically expect a 25 percent pay raise when joining a bank, she said.

Bank executives talked a lot in 2015 about the need to learn from other industries that got decimated by Silicon Valley disruptors. Next year, more banks will unveil pilot programs that automate investment management and make use of technology based on bitcoin’s blockchain, the software ledger that can speed up financial transactions. “Banks are really aggressively hiring IT and data-management to do anything around blockchain” and other financial-technology areas, said Robert Dicks, who runs the human capital practice for financials at Deloitte Consulting LLP. “They look at this as part of their infrastructure, part of the capabilities they need.” Customer-data analysts, compliance analysts and cyber-security personnel also are in demand, he said.

While investors have shown heightened skittishness this month about holding risky corporate debt such as leveraged loans, some areas of corporate financing are expected to flourish next year. Continued merger activity will drive investment-grade debt issuance, even with rates rising, Jim Amine, head of Credit Suisse Group AG’s investment bank, said in October. He and others have predicted a pickup in private placements, and banks are increasing their efforts to market derivatives to corporations as they raise capital.

Unless you’re the star of the desk, it’s good to be junior, according to recruiters. In the wake of the financial crisis, many departments slowed hiring and shrank, and workers who survived the cuts then stuck around longer to make up for lost earnings. That’s left many desks with a dearth of employees with five to seven years of experience, warping the typical shape of organizations’ ladders so that they’re thin in the middle, said Paul Sorbera, president of New York-based search firm Alliance Consulting. Demand for analysts, associates and vice presidents “is as strong as I’ve seen it,” Sorbera said. By contrast, “there is an overwhelming amount of senior people in the barbell at the top.”