A measure of demand for copper, the metal used in everything from power lines to electronics, is at the weakest in more than two years, signaling the meltdown that’s sweeping through commodity markets could get even worse. 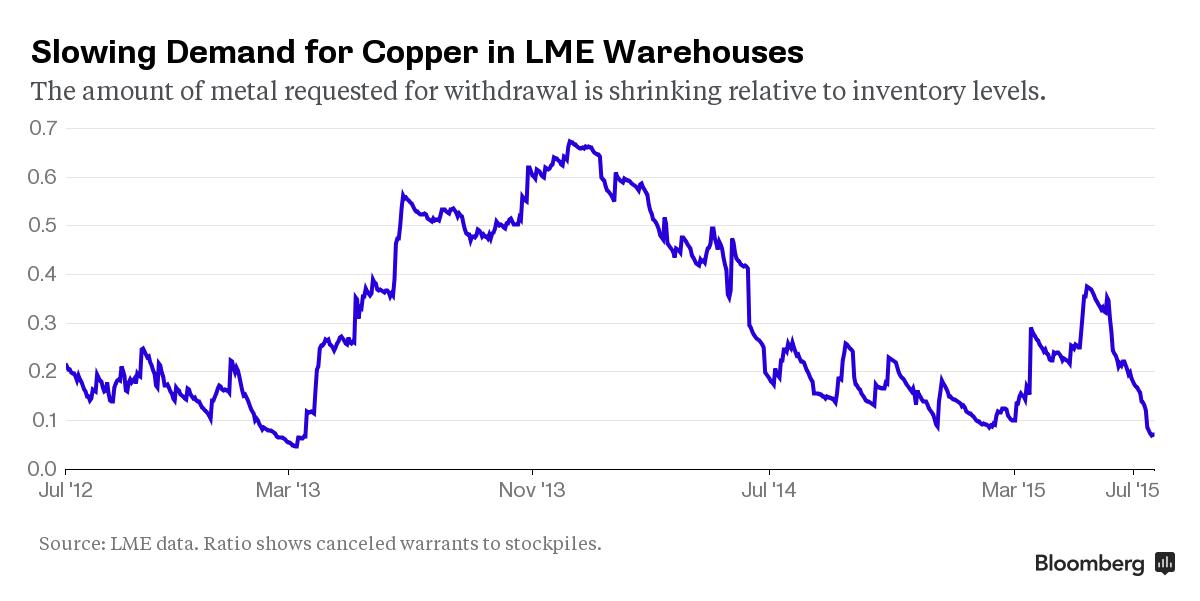 The number of requests to withdraw copper from London Metal Exchange warehouses relative to the level of global inventories tracked by the bourse dropped this week to the lowest since March 2013. That shows consumption has almost dried up for the stockpiles that have doubled over the past year.

Slower economic growth in China, the world’s biggest metals user, helps to explain the drop in demand. For commodity investors, it’s a bad omen because copper has historically been used as an indicator for what’s to come in raw materials and as a gauge of global expansion.

“Copper is ubiquitous in its uses across industry,” Nic Brown, the head of commodity research at Natixis SA in London, said in a telephone interview. “Concerns about copper prices and Chinese demand for copper, that’s a good reason to be worried more generally about demand for industrial metals and a wide variety of other commodities as well.”

Copper futures for August delivery declined 1.7 percent to $2.433 a pound at 11 a.m. on the Comex in New York, heading for the biggest loss in two weeks.

“On a fundamental basis, at the moment, the market is still extremely well supplied with material,” Matthew Wonnacott, a senior consultant at CRU Group in London, said in a telephone interview. “There’s really no reason why anybody should need to withdraw material from an exchange for consumption. Demand in the market is just disappointing this year. It’s not just China, in general demand is poor.”

The Bloomberg Commodity Index of 23 components fell as much as 1.1 percent to 95.2578, the lowest since 2002. Prices have fallen as the U.S. moves closer to raising interest rates, which has driven gains for the dollar and cut the appeal of raw materials as alternatives.