Gold fell to a 15-week low and silver slumped to the cheapest in seven months after Greece’s economic crisis boosted haven demand for the dollar, eroding the allure of precious metals as stores of value.

The dollar rose to a five-week high against a basket of 10 currencies. Greek Prime Minister Alexis Tsipras is in Brussels for what could be a last chance to secure a rescue from European leaders and keep his country in the euro. In the week ended June 30, the net-long position in gold futures and options plunged 55 percent, the most since U.S. government data began in June 2006.

The Federal Reserve may increase U.S. interest rates this year for the first time since 2006 after gains in the labor market, supporting the dollar. Higher rates curb gold’s appeal because the metal doesn’t pay interest or offer returns like other assets such as bonds and equities.

“The economic crisis in Greece has not been able to help gold since most investors are rushing to buy more dollars,” Bill O’Neill, a partner at Logic Advisors in Upper Saddle River, New Jersey, said in a telephone interview. “The anticipation of tightening by the Fed is keeping gold under pressure.”

Through Monday, gold dropped 11 percent in the past 12 months as the greenback jumped 18 percent.

Bullish bets on gold futures and options last week fell to 21,480 contracts, the lowest since October 2006, government data showed Monday. Holdings in global exchange-traded funds backed by the metal declined in eight of the past nine weeks, according to data compiled by Bloomberg.

Aggregate futures trading in silver on Tuesday doubled compared with the 100-day average for this time, according to Bloomberg data. Gold volume was 29 percent higher.

Palladium futures on the New York Mercantile Exchange plunged 4.7 percent, the most since June 12, 2014.

Platinum dropped 2.7 percent, the most since January. 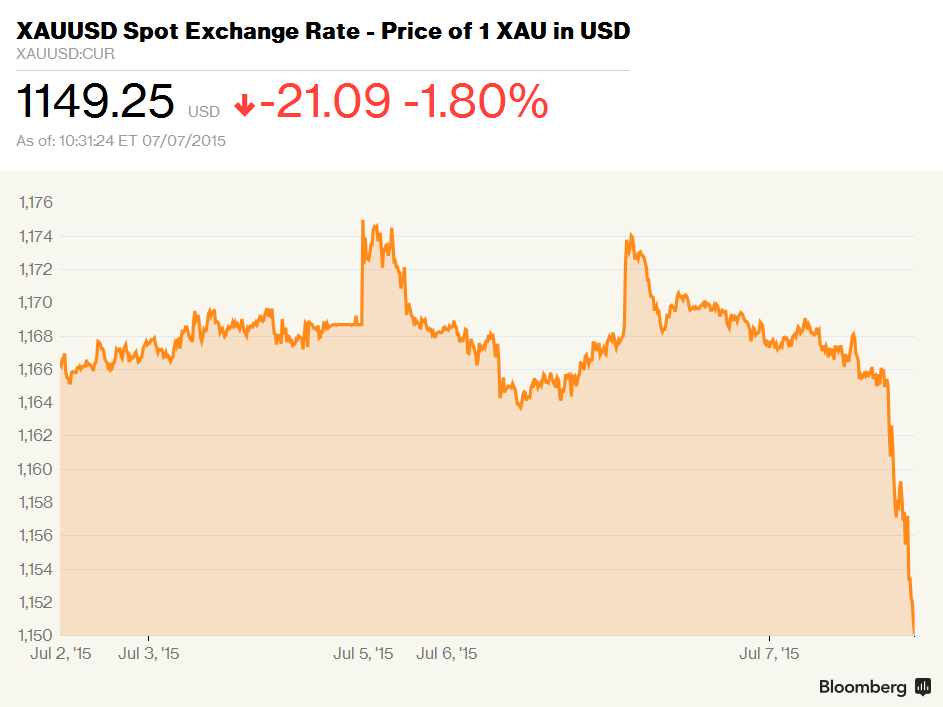