Walt Bettinger on how he values RIAs, helping advisors with changing client demographics and an aging workforce, and why he cringes at the growth of target-date funds.

It’s not every day that the CEO of Charles Schwab & Co. (SCHW) speaks to the advisor press, though in previous interviews Walt Bettinger has said that he regularly does talk to advisors who custody with Schwab or are considering doing so.

In a telephone interview on June 20, during Schwab’s invitation-only Explore event for its RIAs in Tucson, Ariz., Bettinger (at left in photo) and Bernie Clark (right), who runs Schwab Advisor Services (SAS), spoke of the opportunities for RIAs and some initiatives that SAS was rolling out. However, Bettinger also spoke of some other topics dear to his heart, and reiterated that “advisors are core to our overall corporate strategy; they’re not a sideline business.” Advisors in Schwab Advisor Services, he said, “are our primary strategy in the high-net-worth” space.

When asked about Schwab’s relationship with RIAs who custody with SAS, Bettinger characterized it as “so much deeper, so much richer” than mere custody, despite that role’s importance, and said advisors were looking for Schwab to help them in many areas.

“Advisors recognize the importance of the coming intergenerational wealth transfer,” he said, saying they “need to align with the children of their existing clients.”

Helping advisors take a broader view of who their clients are and could be—including a view that includes an ethnicity, race or gender different than the advisors’—”is good for investors, for advisors, and for Schwab,” Bettinger said. Helping them find those new clients is a “natural extension” of what Schwab provides to advisors.

“We couldn’t have [that kind of deeper relationship with advisors],” Bettinger said, “if we were competing with them.”

As another example of Schwab’s commitment to independent RIAs, he mentioned what he has previously called a “misstep” when Schwab acquired U.S. Trust in 2000 and its decision to sell U.S. Trust in 2007.

What about the aging of the advisor workforce, and the still relatively paltry number of female advisors? Bettinger said he had gone through the attendee list for Explore, and reported that about 20% of the advisors were women. “The people here,” he said, referring to Explore attendees, “got started 15, 20, 30 years ago” in building their now successful advisory firms.

He pointed to the high proportion of young women among the interns that Schwab is training for eventual placement in advisory firms as a cause for hope, and suggested that “20 years from now” the ratio of female to male advisors “will be much more balanced.”

As for Schwab’s corporate HR focus, Bettinger said “we want our employee base to reflect the clients we serve.”

What about restoring clients’ trust in the financial system and financial institutions like Charles Schwab? “Trust is a big-picture issue,” he replied, saying it was understandable that distrust will linger due, for example, to the perception that high-frequency traders have an inordinate amount of control over the markets. “The average consumer doesn’t understand the difference between the fiduciary standard and the suitability standard,” he said, so the “industry has to help consumers understand” that difference. Bettinger argues that while it’s not necessary to “force fiduciary on everyone,” he also “believes that what wins is what is in the best interests of the consumer; we’ve done that for 40 years.”

Is he worried about investors who seem to always be moving into sectors at the wrong time, for example moving from equities into bonds just as the stock market started soaring?

“There are self-directed, highly sophisticated investors who do a good job” investing on their own, he said, but also pointed out that “two-thirds of people are more confident with their investing decisions” when they get some advice from others. “We see that on the retail side,” Bettinger said, “where we do it in a fiduciary way.”

However, he is worried about “self-directed investors without that sophisticated knowledge,” which is part of why Schwab retail offers a range of educational tools and capabilities, along with the ability to “refer to an advisor” when appropriate.

Target date funds take into account “only one factor—your age” rather than the multiple factors necessary to invest for a long-term goal like retirement.

“I worry,” he said again, that for too many self-directed investors, “near-term economics takes precedence over long-term” planning.

Returning to Schwab’s corporate strategies, Bettinger spoke about the company’s new advertising campaign, ”Own Your Tomorrow,” which launched in June in TV, print, online and mobile and replaces the longrunning “Talk to Chuck” campaign. Bettinger said the goal of the new campaign was to “re-establish Schwab as a challenger brand” and that it will be “more inclusive of all the company’s” offerings, including its advisor channel.

Additional ads in the campaign will roll out over the coming months, he promised, all of which are designed to “resonate with driven investors,” who he defined as people who are “involved with their communities and their money.”

Check out Schwab’s Leaders Talk of ‘Never Greater’ Opportunities for RIAs on AdvisorOne. 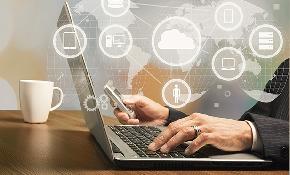 How RIAs Can Manage Cybersecurity Risks Amid Coronavirus Disruption