Deep divisions among Senate Democrats over whether to cut popular benefit programs pose a big obstacle to attempts to avoid an economy-crushing fiscal cliff.

WASHINGTON (AP) — Deep divisions among Senate Democrats over whether cuts to popular benefit programs like Medicare and Medicaid should be part of a plan to slow the government’s mushrooming debt pose a big obstacle to a deal for avoiding a potentially economy-crushing fiscal cliff, even if Republicans agree to raise taxes.

Much of the focus during negotiations seeking an alternative to $671 billion in automatic tax increases and spending cuts beginning in January has centered on whether Republicans would agree to raising taxes on the wealthy. President Barack Obama has insisted repeatedly that tax increases on the wealthy must be part of any deal, even as White House officials concede that government benefit programs will have to be in the package too.

“It is the president’s position that when we’re talking about a broad, balanced approach to dealing with our fiscal challenges, that that includes dealing with entitlements,” White House press secretary Jay Carney said Tuesday, referring to the mammoth benefit programs.

But even if GOP lawmakers agree to raise taxes, there is no guarantee Democrats can come up with enough votes in the Senate to cut benefit programs — as Republicans are demanding.

There’s a growing consensus among Senate Democrats and the White House that Social Security should be exempt from any deficit-reduction package. But some centrist Democrats in the Senate argue that fellow Democrats must be willing to consider cuts to Medicare and Medicaid in order to get concessions from Republicans on taxes.

“It has to be both — a significant revenue increase as well as spending cuts,” said Sen. Max Baucus, D-Mont., chairman of the Senate Finance Committee.

Sen. Kent Conrad, D-N.D., who is retiring as chairman of the Senate Budget Committee, said rising health care costs in Medicare and Medicaid are helping to drive future spending, making them an essential part of a long-term deficit-reduction package.

“I’ve been part of every bipartisan group here. We’ve always put everything on the table,” Conrad said. “If you’re going to solve this problem, you’re going to have to deal with where the spending is and the revenue can be raised.”

But senators like Baucus and Conrad increasingly are being drowned out by other Democrats emboldened by the recent election results to fight against benefit cuts.

Sen. Tom Harkin, D-Iowa, said he is willing to find savings in Medicare and Medicaid by making them more efficient. But, he said, he won’t support benefit cuts.

“I think the election spoke very strongly about the fact that the vast majority of American people don’t want to cut these programs,” Harkin said.

Sen. Dick Durbin, the No. 2 Democrat in the Senate leadership ranks, said he doesn’t think there should be a rush to overhaul entitlement programs in connection with the move to avert the fiscal cliff in the remaining weeks of the current session.

The Illinois Democrat said in a CNN interview Wednesday that “what we need to put on the table short-term is mandatory deficit reduction.” Durbin said entitlement reforms to programs like Medicare and Medicaid should be “part of the long-term strategy” of reining in federal deficits.

Durbin repeated his position that Social Security should not be a part of the discussions. And he said that “we want to make sure that Medicare at the end of the day is a program that is solvent and we can count on it for years to come.”

Congress and the White House are devoting the next three weeks to finding at least a bridge over the fiscal cliff by reducing the sudden jolt of higher taxes and spending cuts in January while laying a framework for addressing the nation’s long-term financial problems next year.

Obama wants to let tax rates rise for wealthy families while sparing middle- and low-income taxpayers. Some Republican leaders, including House Speaker John Boehner of Ohio, have said they were willing to consider making the wealthy pay more by reducing their tax breaks. But most Republicans in Congress adamantly oppose raising anyone’s tax rates.

Negotiations are going slowly as each side waits for the other to make concessions.

Democrats already have tried to take Social Security off the table. Carney, the White House spokesman, said Monday that changes to the massive retirement and disability program should be done separately from any plan to reduce the deficit. That’s the same position taken by 28 Democratic senators and independent Sen. Bernie Sanders of Vermont in a letter to fellow senators in September.

“We will oppose including Social Security cuts for future or current beneficiaries in any deficit-reduction package,” said the letter, which was signed by many top Democrats, including Majority Leader Harry Reid of Nevada. In the House, Democratic leader Nancy Pelosi has taken the same position, not only on Social Security, but also on Medicare and Medicaid.

“There hasn’t been the slightest suggestion about what they’re going to do about the real problems, and that’s entitlements,” said Sen. Orrin Hatch of Utah, the top Republican on the Senate Finance Committee. “There’s a certain cockiness that I’ve seen that is really astounding to me since we’re basically in the same position we were before” the election.

Durbin has tried to find common ground, saying he would be willing to require wealthy seniors to pay more for Medicare benefits.

“If we simply stand by and say ‘don’t touch Medicare in any way, for any reason, ever’ we are inviting a crisis that opponents can exploit to eviscerate Medicare or even to end it,” Durbin said Tuesday. “Progressives should be willing to talk about ways to ensure the long-term viability of Social Security, Medicare and Medicaid, but those conversations should not be part of a plan to avert the fiscal cliff.”

Post-election: What’s in store for the insurance industry?

Wealth Management M&A on a Tear, and Mutual Funds Are Next: PwC

Twenty percent of mutual fund managers may be gone in the next five years, according to the consultancy. 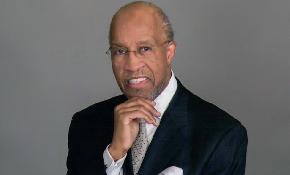 How the First Black CFP Built His Practice

LeCount Davis, 82, tells ThinkAdvisor about his mentors, the obstacles he faced, and why he still serves clients.