By Melanie Waddell | October 01, 2004 at 04:00 AM | The original version of this story was published on Investment Advisor

The time for rollovers has come, and will continue for the next 20 years or more. Talk to most advisors, and they'll tell you quite...

The time for rollovers has come, and will continue for the next 20 years or more. Talk to most advisors, and they’ll tell you quite a bit of their business already comes from retiring baby boomers rolling qualified retirement plan assets into individual retirement accounts.

A recent report from Boston-based Cerulli & Associates shows just how huge the rollover business is. At year-end 2003, IRAs held more than $3 trillion in assets, with traditional IRAs accounting for most of that total, Cerulli says. That’s more than the $2.4 trillion in assets that are now held in defined contribution plans.

Luis Fleites, the Cerulli analyst who authored the report, “Capturing and Retaining Rollovers: Positioning for Success,” says that participants in IRAs who are age 50 and older “now hold 59% of 401(k) assets.” So once these boomers retire, lots of money will flow out of 401(k)s. Job changers, too, he says, will be moving assets out of 401(k)s. Cumulative rollover contributions from retiring boomers and job changers, Fleites says, is projected to exceed $1.9 trillion between 2004 and 2010.

Annual rollover contributions in 2003, Fleites reports, hit $150 billion. “The surge in rollover inflows–$19 billion more than 2002 amounts–is partly attributable to rising equity markets,” he says. “It also reflects the lingering effects of layoffs, early retirements, and job terminations during the bear market, as many of these employees are finalizing their rollover provisions.”

Morris Armstrong, a planner with Armstrong Financial Strategies in New Milford, Connecticut, admits that he doesn’t “actively solicit” rollovers. His retiring clients like his “planning and investment approach,” giving him “the opportunity to manage their newly developed IRAs.”

Advisors responding to Cerulli’s survey said that approximately 20% of their books of business are rollover assets. Banks reported the highest percentage, 23%, Fleites says. But little deviation was found among the various channels. “The small disparity of client assets in IRA rollovers by channel is rather surprising because traditionally we expect to see significant client profile differences between wirehouse clients and insurance clients,” Fleites says. Insurance advisors have the smallest average accounts. “Wirehouses and RIAs, both of which have clients with much larger account balances, must attract or capture larger rollover balances in order to maintain the same proportion of rollover assets that other channels report,” Fleites points out.

While interviewing mutual fund companies, broker/dealers, and individual advisors for the survey, Fleites noticed a surprising trend: there are a limited number of options in terms of retirement income products available to clients. Retiring baby boomers have historically been offered an immediate annuity or income ladder, he says. “In many cases, [those products] still work, but retirees have lots of needs” like long-term care and wealth transfer, so they need more options. “Retirement income is becoming a service that requires products, and there hasn’t been that much development or focus on it because [baby boomers have been accumulating assets] for the last 20 to 30 years,” he says.

Responding to an informal poll of advisors performed by Investment Advisor, Greg Plechner, a planner with Fee Only Wealth Management in Old Tappan, New Jersey, says there are three reasons why his rollover business has been booming over the last few years. While the Bush Administration has instituted two major tax law changes–the Economic Growth and Tax Relief Reconciliation Act (EGTRRA) and the Jobs and Growth Tax Relief Reconciliation Act (JGTRRA)–rollover rules for non-spouse beneficiaries haven’t changed, Plechner says. The “stretch” IRA has become a haven for unmarried employees or those doing estate planning, Plechner says. Employer-sponsored retirement plans “almost always limit the options available to a beneficiary by forcing distributions to the beneficiary in a period of time shorter than is required under the regulations (i.e., the single life expectancy of the beneficiary),” he explains. A stretch IRA, on the other hand, “does not force this distribution and thus guarantees the beneficiary the ability to delay taxation as long as possible while providing full access to the balance as needed.”

The “portability provisions” of JGTRRA created a number of ways for advisors to transfer their clients’ retirement plan balances from one account to another, Plechner says. For instance, he points out that after-tax contributions and 457 plans can now be rolled over to an IRA. Pre-tax IRA contributions can now be consolidated with rollover IRAs. And “qualified plan balances can, with a few restrictions, be consolidated with much greater ease,” he says.

Bedda D’Angelo, a planner with Fiduciary Solutions in Andover, Massachusetts, who also responded to the IA poll, says many of her clients are retiring early and starting consulting businesses. She’s been rolling their 401(k) assets from previous employers’ plans into a one-person 401(k) so clients have the option of “taking a loan to fund their startup costs without dipping into capital.” But she recommends that doctors and lawyers who may have to defend themselves against a malpractice suit keep their assets in a qualified plan. Why? “Qualified plan assets are protected from creditors, whereas IRA rollovers are not,” she says.

About 90% of Steve Merkel’s business at Investor Solutions in Coconut Grove, Florida, comes from IRA rollovers from brokerage firms. He’s also seeing a lot of clients rolling their qualified plans into IRAs. Merkel warns that you have to spend time keeping up with new rules that affect qualified plans and IRAs. For instance, IRA contribution limits for those aged 50 and younger were increased to $3,000 this year from $2,000, and people aged 50 and older can now contribute up to $3,500 to an IRA annually. Next year, the limits jump to $4,000 and $4,500, respectively, and in 2008 will reach $5,000. Thereafter, according to the Center for Retirement Research at Boston College, “the limit is indexed for inflation annually in $500 increments.”

The bulk of Merkel’s clients are retired wealthy individuals, and he’s noticed many taking advantage of a new law that allows them to withdraw money from their IRA without paying the 10% penalty. “Congress realized that not everybody was waiting until age 591/2 to retire,” he says, so lawmakers amended the law to allow someone retiring at age 50 to tap into their IRA, “but they have to take [out] the same amount every year until they reach age 591/2.”

Lawmakers are also making it harder for taxpayers to deduct IRA contributions. When IRAs were first developed, Merkel says, anyone contributing the maximum $2,000 could deduct it from their taxes. Today, however, “if you’re married and [you and your spouse] jointly make more than $60,000, and one of you has a retirement plan where you work, you won’t get the deduction,” Merkel says.

Jeffrey Smith, a planner with North Shore Investment Consulting in Grayslake, Illinois, predicts the rollover business for advisors will continue to spike, prompted by “corporate plan sponsors’ increased emphasis on 401(k) plans, the commensurate reduction in defined benefit programs, and the tendency for young professionals to change employers much more frequently.”

The rollover market is booming, and if you’re an advisor who hasn’t tapped this lucrative market, you have time. But be proactive. Start combing through your clients’ data to see if they have qualified retirement accounts that can be rolled over to an IRA. Take the advice of Neil Brown, a planner with Advanced Financial Planning in Columbia, South Carolina. “Advisors are looking at the largest transfer of wealth from generation to generation that we have ever seen, and should be positioning themselves to take on clients.” Brush up on the IRA distribution rules and stretch provisions, Brown counsels, and become an expert in beneficiary designations.

The agency is trying to correct for glitches that prevented some families from collecting the payment. 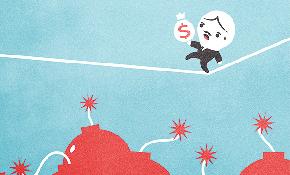 Do Investors Really Understand the 5 Risks of Retirement?

A researcher examines if adults over 50 rank the five types of financial risks the same way the empirical evidence says they should.