Ed Slott: Hold Off on Backdoor Roths, and More Tips for Tax Season in 2022

Tax time has rolled around again, and tax and IRA specialist Ed Slott of Ed Slott & Co. has plenty of advice for advisors. First and foremost, he told ThinkAdvisor in a recent interview, now’s the time for advisors to “communicate to clients that you add value beyond your core capability” by advising them on tax issues.

Advisors, Slott said, “do a pretty good job on investing and rebalancing and all that stuff, that’s kind of baked into the cake.”

However, if they’re “not adding value in the mind of the clients, then [the clients are] going to look at price and everybody else’s price” compared to their advisor’s.

If advisors lack in-house tax expertise, they should “connect with their clients’ CPA,” Slott said, especially if the advisor is “handling what may be your clients’ largest asset, their IRA or 401(k); these accounts are loaded with taxes.”

If advisors “don’t know who [their] client’s accountant is, then that’s a bad sign,” Slott said. It’s “a great thing to connect with the client’s CPA. Clients love that their advisors are strategizing for them … everybody wins.”

As pending tax and retirement legislation looms, Slott explains that advisors need to be more careful than ever in helping clients this tax season. He also provides an overview of tax and retirement planning areas where advisors can add value to their client relationships.

ThinkAdvisor spoke with Slott recently from his office in Rockville Centre, New York. “That’s command central,” Slott quips. “That’s where I do everything; that’s like a studio … as a person who does a lot of presentations, they all went virtual very quickly” during the pandemic. “It’s a mess, but I know where everything is!” 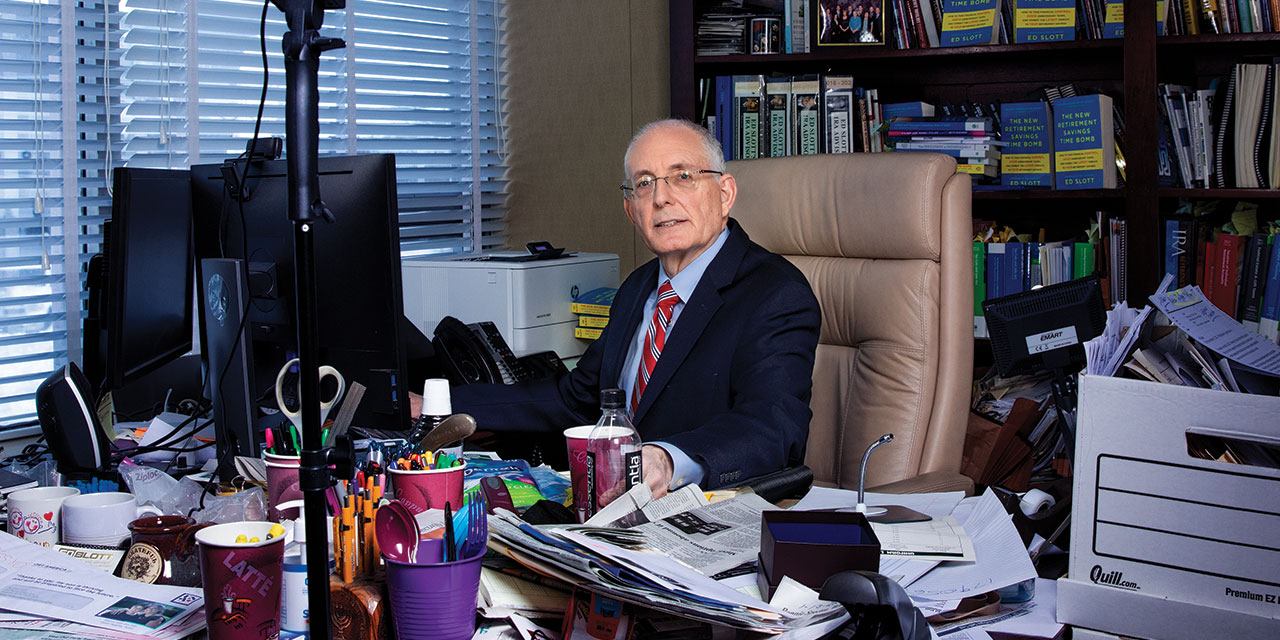 A situation came up recently where a client had started to contribute to their backdoor Roth and Slott advised the client to wait. “There’s a difference of opinion with one of their [the client’s] advisors,” Slott relayed. “He disagreed with me. I said, ‘there is pending legislation to ban backdoor Roths, so I don’t know if I would run to do them so quickly.’ Some people are go-getters and want to get that done early in the year for 2022.”

Slott says to wait on contributing to backdoor Roths “until we know if this Build Back Better [economic bill], or some version of it, will ever pass. If anything passes, that provision I believe will be included because there’s no big opposing constituency for it. There’s nobody picketing at the Capitol: ‘Save the Backdoor Roth!’”

The backdoor Roth is a workaround to the Roth IRA contribution limits: The client first contributes to a nondeductible traditional IRA (where there is no income limit) and then converts those funds to a Roth IRA, Slott explained.

“The existing provision [in the Build Back Better bill] says the ban on the backdoor Roth will be effective as of Jan. 1, 2022. But we’re already past that,” Slott said. “So [the advisor’s] point was: ‘Well, they can’t disallow something retroactively once you already did it.’ But I’m more conservative; why take a chance?”

However, if a client contributes to a backdoor Roth, and has to “undo it,” Slott continued, there’s “a lot of paperwork and reporting, and who needs that? And the more paperwork and changing you do, the more likely mistakes are going to be made.”

Also banned under Build Back Better would be so-called mega backdoor Roths, Slott explained in a recent ThinkAdvisor article, for those in company retirement plans who can contribute after-tax funds to the plan and then convert them essentially tax-free to their Roth IRAs.

Review Form 1099s, Slott warns, as they can be rife with errors.

“We’re finding there are lots of mistakes in there — maybe some of these institutions were short-staffed or people were working from home …, he explained. “You type the wrong code into a 1099-R for retirement distributions, it can make the difference as to whether something is taxable or not or subject to a penalty.”

Due to COVID-19 and “more mistakes that we’re seeing” on the 1099s this year, “you can’t rely on the first version of the 1099 that either Schwab, Fidelity, Vanguard or whatever company you’re with because they are constantly issuing corrected 1099-R forms as they find different things — capital gains, a lot of different items,” Slott warns.

Hold off on filing tax returns until at least the end of February, Slott advises. “I found [errors] on my own, with Schwab, I think, I had two or three corrected 1099s for big statements.”

Help clients collect all their information for their required minimum distributions, Slott said.

There are new life expectancy tables, “but only for 2022 RMDs,” Slott said. The Internal Revenue Service hasn’t made such a change in 20 years, he said.

“You don’t want a client coming back saying, ‘I took out too much because I used the old table.’”

Debate: Did the IRS Get It Right on Secure Act RMD Rules?

IRS: Here’s Who Qualifies for a Tax Extension

“Before the Secure Act, [the IRS] used age 70; life expectancy for the period was 27.4 years. Now they start at age 72, and guess what the life expectancy is [under the new IRS tables]? 27.4 years. So it’s moved up by two [years] but if you’re starting, you’re still taking out the same amount, which is about 3.65%,” he explained.

So “in general, for most people it’s a year to two years more life expectancy, which means your RMDs will be slightly lower,” he said. “But if you’re a beneficiary, taking RMDs and you’re younger, the new RMD isn’t that much different — it is a little lower — but because it’s based on life expectancy, the shorter your life expectancy (people in their 70s) are going to see more of a decrease in the RMDs in their taxes than younger people who inherit.”

The problem with QCDs, Slott said, is that “most people do them at the end of the year because that’s when they’re in gift-giving mode, like in December, but they really should be done early in the year. I always say January is the new December.”

Remember, “most people since the Tax Cuts and Jobs Act [of 2017] don’t get any tax benefit for the donations they make because most people use the standard deduction now,” Slott explained.

The QCD “gives people an opportunity to get a great tax benefit for the donations they make if they qualify for QCDs — it’s only for IRA owners or beneficiaries who are 70 ½ or older,” he said.

If advisors have a client that’s subject to RMDs, they may want to offset the income by doing a QCD. “I never say give to charity to reduce your tax bill; I always say, ‘if you’re giving anyway do it this way to cut your tax bill,’” according to Slott.

An advisor may have “a client with a $5,000 RMD this year, but they normally give the $5,000 to charity — do the QCD early, the first distributions out should be the QCD. If you do the QCD early then you don’t even have to take an RMD, it completely offsets it,” he said. “But, if you took the RMD first, then you can’t offset that income because there’s a ‘first dollars out rule.’”

The IRS issued on Feb. 1 a revised Fact Sheet and frequently asked questions on the 2021 child tax credit and advance child tax credit to help eligible families properly claim the credit when they prepare and file their 2021 tax return.

The child tax credit situation this year is “a mess!” Slott said. “Some people may end up paying a tax pro more than the credit!” Others, Slott said, “may still pay a tax pro only to end up returning money they already received. Advance payments can always be tricky when it’s time to reconcile.”

The IRS guidance is “a good reference guide for tax advisors though,” Slott said. “This will help lots of them figure this out and do the correct reporting for their clients.”

He added: “It’s unreal how many related IRS tax forms can be involved here, including IRS Letter 6419 which includes info on funds received for advance child tax credit payments and qualifying children.”

“Keep an eye on this bill” in 2022, Slott advised in a recent ThinkAdvisor article. “Of all the bills that could be enacted in 2022, this one has the best chance, having passed out of committee unanimously, with full bipartisan support.”

“In addition, plan catch-up contributions would be required to be made to Roth plan accounts, and plans could allow participants to have employer matching contributions made as Roth contributions.”

Overall, it’s shaping up to be an active tax season for advisors and their clients, Slott has noted. Advisors need to be aware of changes, potential and real, to help clients discern what they can do to reduce their tax bill.

Debate: Did the IRS Get It Right on Secure Act RMD Rules?

IRS: Here’s Who Qualifies for a Tax Extension