By Alex Tanzi and Mike Dorning

After years of declines, America’s middle class now holds a smaller share of U.S. wealth than the top 1%.

The middle 60% of U.S. households by income — a measure economists often use as a definition of the middle class — saw their combined assets drop to 26.6% of national wealth as of June, the lowest in Federal Reserve data going back three decades. For the first time, the super rich had a bigger share, at 27%.

The data offer a window into the slow-motion erosion in the financial security of mid-tier earners that has fueled voters’ discontent in recent years. That continued through the Covid-19 pandemic, despite trillions of dollars in government relief. 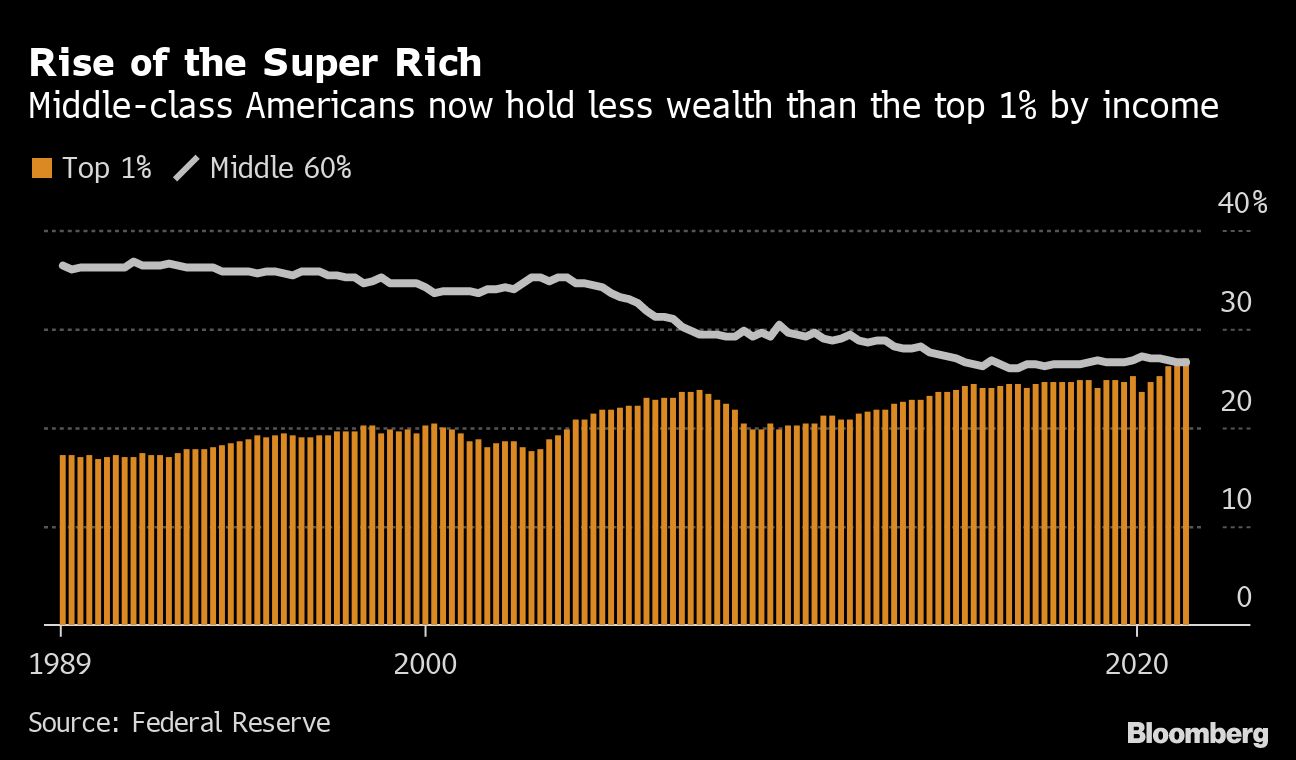 While “middle class” has different meanings to different people, many economists use income to define the group. The 77.5 million families in the middle 60% make about $27,000 to $141,000 annually, based on Census Bureau data.

Their share in three main categories of assets — real estate, equities and private businesses — slumped in one generation. That made their lives more precarious, with fewer financial reserves to fall back on when they lose their jobs.

The top 1% represents about 1.3 million households who roughly make more than $500,000 a year — out of a total of almost 130 million. The concentration of wealth in the hands of a fraction of the population is at the core of some of the country’s major political battles.

President Joe Biden is seeking to bolster working- and middle-class families with a $3.5 trillion package before Congress that includes assistance with child care, education and health care paid for with tax increases on high-income individuals.

The Big Risk in Stock-Based Compensation, and How Advisors Can Help

10 Ways to Hit the Ground Running in the New Year

“If the economic system isn’t working for the clear majority of the population, it will eventually lose political support,” Nathan Sheets, newly appointed chief economist at Citigroup Inc., said by email. “This observation is motivating many of the economic reforms that the Biden Administration is putting forward.”

Over the past 30 years, 10 percentage points of American wealth has shifted to the top 20% of earners, who now hold 70% of the total, Fed data show.

A generation ago, the middle class held more than 44% of real estate assets in the country. Now it’s down to 38%.

The pandemic generated a boom in housing values that has benefited most those who owned real estate in the first place. It also led to soaring rents this year, which hurt those who can’t afford a house. The self-feeding loop created more wealth for the wealthier.

Another reason why the middle class’s wealth is eroding is because these families hold an outsized and growing portion of non-mortgage consumer debt, which typically comes with higher interest rates.

The Big Risk in Stock-Based Compensation, and How Advisors Can Help

10 Ways to Hit the Ground Running in the New Year