The Congressional Budget Office is projecting that the U.S. economy will not make up losses due to the COVID-19 pandemic and subsequent lockdowns until 2030.

The cumulative real economic output in 2019 dollars through 2030 will be $7.9 trillion, or 3%, less than what the agency had projected in January. In nominal terms, the shortfall is estimated at $15.7 trillion, according to an analysis comparing the CBO’s latest projections with those it released in January that was requested by Senate Minority Leader Charles Schumer, D-N.Y. 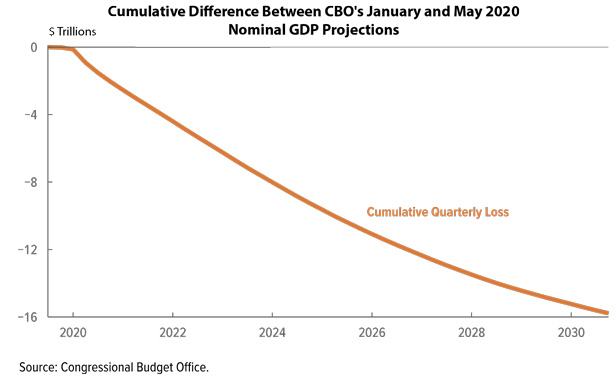 The revised forecast “reflects a significant markdown in CBO’s projection of real (inflation-adjusted) production in the United States as a result of the pandemic,” writes CBO Director Phillip Swagel in a letter to Schumer.

“Business closures and social distancing measures are expected to curtail consumer spending, while the recent drop in energy prices is projected to severely reduce U.S. investment in the energy sector,” continued Swagel. He noted that recent legislation to address the economic slowdown — Congress has approved more than $2.2 trillion in emergency aid — will “partially mitigate the deterioration in economic conditions.”

These levels are slightly higher for the first two quarters and slightly lower for the second two compared to an earlier projection made in April.

Swagel cautioned that the latest CBO projections “are preliminary,” don’t fully reflect changes to the CBO’s forecast and are surrounded by “an unusually high degree of uncertainty.” There’s uncertainty about the pandemic and the impact of policy actions in response, the effects of social distancing on the economy and the data that the CBO collects because “extreme changes have disrupted standard estimation methods and data sources,” writes Swagel. In addition, future policy changes, including additional federal pandemic-related legislation, will affect economic outcomes, he writes.

The CBO will publish a more comprehensive forecast covering the years through 2030 later this year.