529 Plans Suffered in Q1 but Continue to Evolve

Despite uncertainty about the upcoming academic year due to the coronavirus pandemic, at least one constant remains in the college planning process: the benefits of 529 savings plans.

They remain one of the primary vehicles to help finance a college education because their assets grow tax-free and their withdrawals are tax-free so long as the funds are used for qualified educational expenses.

Moreover, fees for 529 plans have been falling and the structures of many have been improving with smoother glide paths for age-based portfolios, according to a new report from Morningstar.

Fees for the average direct-sold age-based portfolio in 529 plans fell to 0.35% in 2019 from 0.39% in 2018, and for the average advisor-sold portfolios they dropped to 0.89% from 0.93%, according to Morningstar. The price discrepancy between the two types of plans reflect not only commissions involved on some advisor-sold plans but the fund investments themselves. At least 80% of the portfolios in direct-sold plans are invested in index funds, the same percentage that’s invested in actively managed funds in advisor-sold plans.

529 plan investors, like many others, have been favoring cheaper direct-sold plans, which account for about 60% of 529 plan assets. Their assets grew 7.3% last year while the assets of higher fee advisor-sold plans grew just 2.8% over the same period. 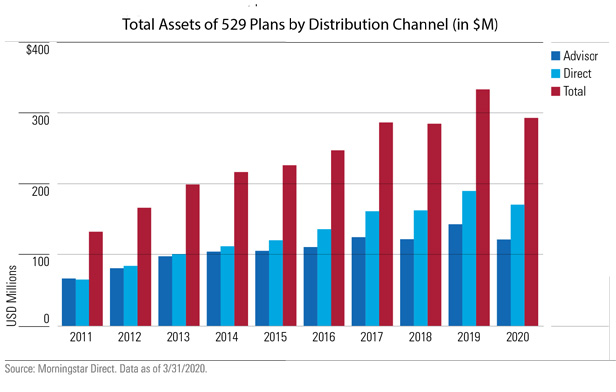 Overall, more 529 plans have adopted smoother transitions for age-based portfolios, which shift the balance between stocks and bonds as students approach their college enrollment years. More plans are taking smaller steps, typically 10 percentage points, when shifting the balance between stocks and bonds, which reduces the variability of results while improving or stabilizing investment outcomes, according to Morningstar.

But the volatility in markets due to the COVID-19 pandemic has taken its toll. Their losses ranged from less than 5% to up to 19% depending on how aggressive the allocation was.

As a result of the market downturn, 529 plan assets fell from a record $328 billion at year-end 2019 to $293 billion by the end of the first quarter. Moreover, almost all age-based 529 portfolios captured 100% or more of the downside due not only to their exposure to stocks but also to their holdings in some of the riskier areas of the bond market, according to Morningstar. Fees also played a role in performance as well as the timing of the shifts made between stocks and bonds.

Morningstar created three hypothetical age-based tracks for a 17-year-old that were identical — a 20% equity allocation split 70%/30% between the S&P 500 and MSCI EAFE indexes, with the remaining 80% invested in the Bloomberg Barclays U.S. Aggregate Bond Index. The track that reduced equities to zero in January earned nothing for the quarter, but the tracks that stepped down in February and March lost 1.3 percentage points and 2.6 percentage points respectively.

“Investors should be reevaluating the asset allocation mixes in the 529 plans especially if they are using age-based portfolios — which most investors are,” says Ross Riskin, director of CFP and ChFC education programs at the American College of Financial Services. Those portfolios “may be overweighted in equities given the planning time horizon and recent events.”

Five asset managers account for about three-quarters of 529 plan assets: Vanguard, American Funds, TIAA, Fidelity Investments and T. Rowe Price. Vanguard leads the pack not only in total  assets but in asset growth from December 2018 through March of this year. Its 529 plan assets grew by $12 billion over that period, which was more than every other 529 manager combined.

Another benefit of 529 plans: Starting this year, families and students can use up to $10,000 worth of 529 plan assets per beneficiary to help pay down student debt.

— Check out A 529 College Savings Day Unlike Any Other on ThinkAdvisor.