George Washington was the founding president of the Society of Cincinnati, which started out serving as, among other things, a fraternal benefit society the provided for the widows and orphans of Continental Army officers.

He himself used his own resources to provide annuities, including an annuity of 50 pounds per year, or the equivalent of about $5,000 per year in 2020 dollars, to support a school in Alexandria, Virginia.

Washington was also a famous resident of Virginia, and the first president of the United States

Thomas Jefferson worked with John Adams and others to hire a famous French artist, Jean-Antoine Houdon, to make a statue based on the likeness of the fraternal benefit society founder.

Houdon started the project in 1785, by sailing to Virginia to take Washington’s measurements and create a plaster “life mask” at Mount Vernon, when Washington was 53.

Jefferson, was in effect, arranging for what today would be thought of as a compensation package that included purchaser-funded life insurance, along with key person life insurance, to protect the commonwealth of Virginia against the risk that Houdon might die.

Here, in observation of the Presidents Day holiday, are lightly edited excerpts from two letters that Jefferson wrote in July 1785 about the key sculptor life insurance procurement effort, based on the versions of the letters in The Project Gutenberg e-book library.

This will accompany a joint letter enclosing the draft of a treaty and my private letter of June 23rd, which has waited so long for a private conveyance. We daily expect from the Baron Thulemeyer the French column for our treaty with his sovereign…

I am, with sincere affection, Dear Sir,

your friend and servant,

P.S. Monsieur Houdon has agreed to go to America to take the figure of General Washington. In the case of his death, between his departure from Paris and his return to it, we may lose 20,000 livres [about $150,000]. I ask the favor of you to inquire what it will cost to ensure that sum on his life, in London, and to give me as early an answer as possible, that I may order the ensurance, if I think the terms easy enough. He is, I believe, between 30 and 35 years of age, healthy enough, and will be absent about 6 months. T.J.

Mr. Houdon’s long and desperate illness has retarded, till now, his departure for Virginia.

We had hoped, from our first conversations with him, that it would be easy to make our terms, and that the cost of the statue and expense of sending him, would be but about a thousand guineas [about $115,000].

But when we came to settle this precisely, he thought himself obliged to ask vastly more insomuch, that, at one moment, we thought our treaty at an end. But unwilling to commit such a work to an inferior hand, we made him an ultimate proposition on our part. He was as much mortified at the prospect of not being the executor of such a work, as we were, not to have it done by such a hand. He therefore acceded to our terms; though we are satisfied he will be a considerable loser.

We were led to insist on them, because, in a former letter to the Governor, I had given the hope we entertained of bringing the whole within one thousand guineas [about $115,000].

This latter proposition was disagreeable to us; but he has a father, mother, and sisters, who have no resource but in his labor: and he is himself one of the best men in the world. He therefore made it a sine qua non, without which all would have been off.

We have reconciled it to ourselves, by determining to get insurance on his life made in London, which we expect can be done for five per cent.; so that it becomes an additional sum of five hundred livres [about $4,440]. I have written to Mr. Adams to know, for what per cent, the insurance can be had. I enclose you, for a more particular detail, a copy of the agreement.

Dr. [Benjamin] Franklin, being on his departure, did not become a party to the instrument, though it has been concluded with his approbation. He was disposed to give two hundred and fifty guineas more [about $30,000], which would have split the difference between the actual terms and Mr Houdon’s demand.

I wish the State, at the conclusion of the work, may agree to give him this much more; because I am persuaded he will be a loser, which I am sure their generosity would not wish. But I have not given him the smallest expectation of it, choosing the proposition should come from the State, which will be more honorable.

You will perceive by the agreement, that I pay him immediately 8333 1/3 livres [about $73,000], which is to be employed in getting the marble in Italy, its transportation, etc. The package and transportation of his stucco to make the moulds, will be about five hundred livres [about $4,400]. I shall furnish him with money for his expenses in France, and I have authorized Dr. Franklin, when he arrives in Philadelphia, to draw on me for money for his other expenses, going, staying, and returning. These drafts will have been made probably, and will be on their way to me, before you receive this, and with the payments made here, will amount to about five thousand livres [about $44,000] more than the amount of the bill remitted me. Another third, of 8333 1/3 livres [about $73,000], will become due at the end of the ensuing year.

Dr. Franklin leaves Passy this morning. As he travels in a litter, Mr. Houdon will follow him some days hence, and will embark with him for Philadelphia. I am in hopes he need not stay in America more than a month.

I have the honor to be, with due respect,

your Excellency’s most obedient

and most humble servant,

Houdon turned out to be 40 years old. In the end, an agent, William Morgan, helped Thomas Jefferson buy 670 pounds of term life insurance, for a term of six months, from the Equitable Assurance Society of London, for a total price of 32 pounds 2 shillings and 6 pence in premiums and fees, according a legal notice obtained by W. Bernard Peach and D.O. Thomas. Peach and Thomas were the editors of a 1991 collection of the letters of Richard Price, who, in turn, was an 18th century political philosopher.

The insurance coverage included provisions that protected Jefferson against the risk that Houdon would die while at sea or while in Virginia. 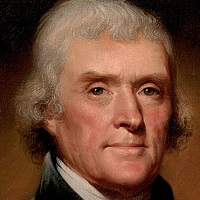 Thomas Jefferson was the third president of the United States. He almost bought some of the first fire insurance available in Virginia for his famous estate, Monticello, but he did not do so.