Philadelphia-based Fox Rothschild said it will also be opening up a new office in Northern Virginia to host part of the group, which is is led by partners Mark Dombroff and Diane Westwood Wilson. The two joined LeClairRyan in 2017.

“Mark, Diane and their team are entrenched in the aviation space and have been involved in nearly every significant airline matter and incident in the United States and abroad,” Mark Silow, chair of Fox Rothschild, said in a statement. “This marquee group is an outstanding and welcome addition to the firm, and their expansive practice positions Fox as an industry leader in aviation-related litigation, commercial disputes and FAA compliance, regulatory and safety issues.”

The firm previously had a small aviation group, led by Dallas partner Tressie E. McKeon, who handled the work as part of her wider litigation practice.

“This will really be establishing a significant practice for the first time,” Silow said in an interview.

He added that he had known both Dombroff and Westwood Wilson for a number of years and that they had reached out to him about a potential move.

Prior to joining LeClairRyan, the pair had worked together at McKenna Long & Aldridge and stayed as the firm merged into Dentons in 2015.

Fox Rothschild is still looking for a location for the new Northern Virginia office, which will initially host Dombroff, who worked out of LeClairRyan’s Alexandra office, and three to five other lawyers from the new team. The firm is also looking to recruit lawyers in other practice groups to build out the office, although Silow declined to give details on what areas it was targeting.

Westwood Wilson is based in New York.

LeClairRyan has been hemorrhaging attorneys in recent months. In June, four financial services litigators in Boston, Dallas and New York left the firm for McGlinchey Stafford, and another five attorneys in Boston, New York and Newark jumped to Duane Morris.

However, the firm also added a new office in Dallas in May of this year, joining Houston and becoming the firm’s second Texas-based office. LeClairRyan was founded two decades ago in Richmond, Virginia; its largest offices are currently in Richmond and Alexandria, Virginia.

The firm’s revenue and head count peaked in 2015, when it grossed $163 million and employed 353 attorneys, according to ALM data. By last year revenue had fallen to $122.5 million, and head count stood at 273 lawyers.

A representative from LeClairRyan did not immediately respond to a request for comment.

The firm has said it is restructuring, invoking a “Law Firm 2.0″ model that calls for growth in locations where clients want the firm to be. As part of that vision, it entered into a joint venture in 2018 with alternative legal services provider UnitedLex. 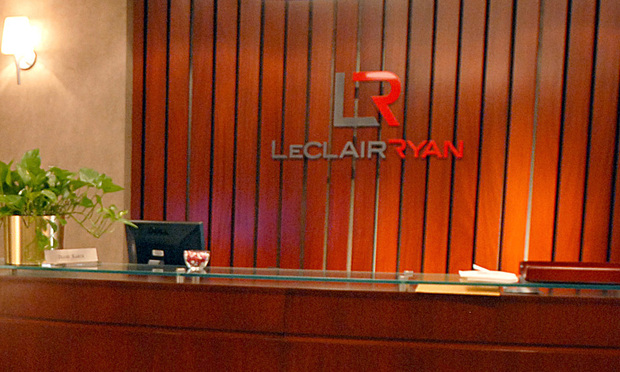