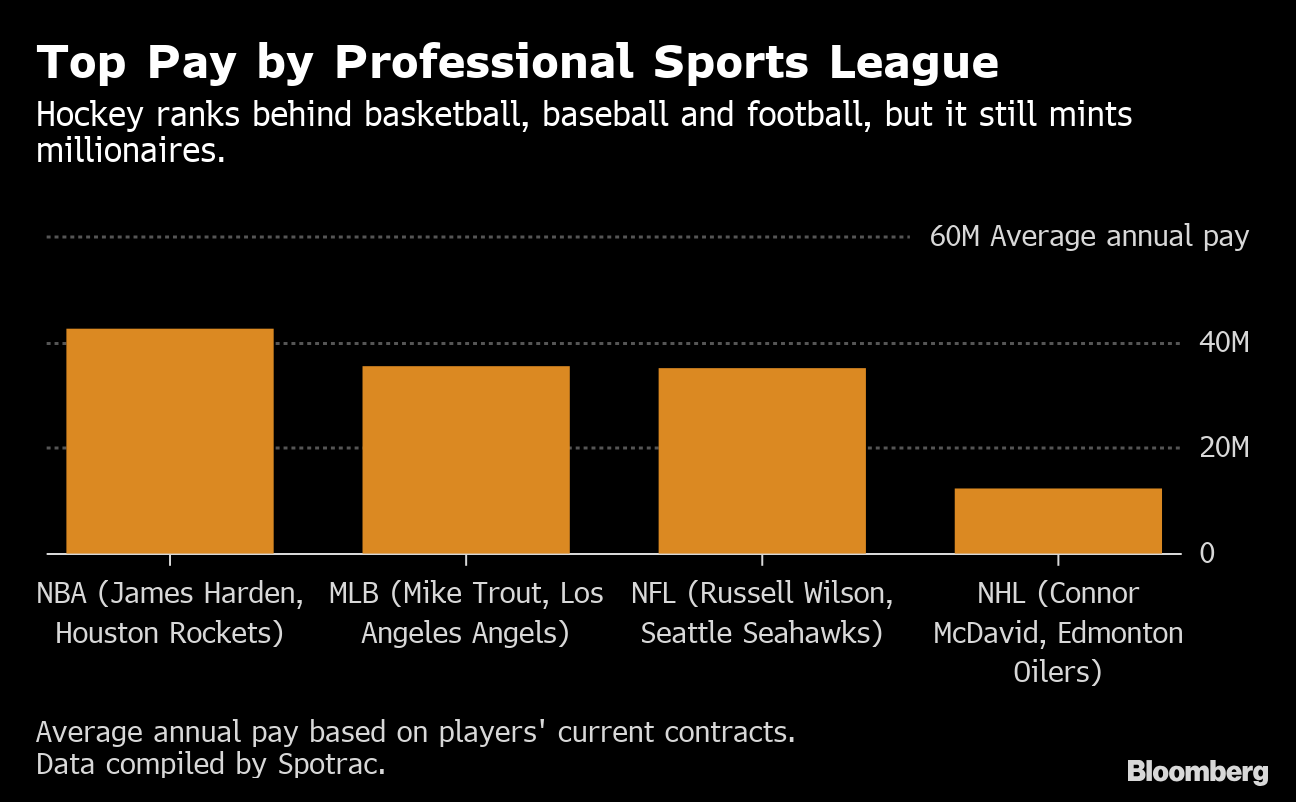 Moynes, 48, handles roughly 10% of the NHL’s active-player roster, about 75 players, and his loyalty lies with his clients.

The trouble is, he’s had at least one on most of the contending teams throughout the playoffs. In the finals, which began Monday, it’s Brad Marchand and Danton Heinen of the Boston Bruins vs. Carl Gunnarsson of the St. Louis Blues.

He and his Southern California-based firm, One Capital Management, have carved a big niche in a field dominated by a few Canadian banks, including Royal Bank of Canada, where Moynes spent a decade working in the sports and entertainment group.

The Toronto native shouldered his way into the high-flying realm of sports wealth advising with an unorthodox, hardworking style that jibes with hockey’s blue-collar roots.

A typical work week might find him pleading with a player to get a will or sign a pre-nup, visiting another at a rink in Europe or telling a client in no uncertain – but certainly profane – terms not to plunk down six figures on an impulsive purchase.

The same goes for home buying. Though he won’t name names, Moynes says he’s fired clients who refused to get with the program. One bought a $2.5 million house without letting Moynes know until he asked for $250,000 for a down payment.

“He is pretty vocal about what we’re doing,’’ said Matt Martin, the New York Islanders winger who’s been with Moynes for about a decade.

Martin, whose engagement to former football star Boomer Esiason’s daughter Sydney was highlighted in the New York tabloids last year, was on the receiving end of a Moynes harangue when they met to discuss finances last fall.

Martin doesn’t have a will, and Moynes insisted he get one. “When he wants something done, he is going to harp on it,’’ Martin said. (They’re working on it, Moynes said.)

Professional hockey ranks below basketball, baseball and football in terms of player pay, but the game still mints plenty of multimillionaires. At One Capital, Moynes’s One Sports and Entertainment Group contributes about 8%, or $130 million, of the firm’s $1.6 billion in assets under management.

One Capital founder Donald McDonald said he recruited Moynes to start the sports division in 2014 because of his focus on matters beyond dollars and cents.

“A lot of the conversations Moynes has with his clients are not about investment management,’’ McDonald said. “He has the ability to see the big picture.’’

Moynes operates from a home base in Toronto, but flies more than 150,000 miles annually. He spends as many as 175 nights a year in hotels visiting clients, prospecting for new ones and attending events like the NHL All-Star Game. In the off season, he goes to so many weddings that his wife, Sarah, has permanently begged off attending.

Unlike many competitors, Moynes focuses on signing young, unproven players who toil in the American Hockey League, in Europe or in U.S. junior programs. His firm makes little money on them, but he’s decided the potential upside is worth the investment.

“What if I turn down an American League guy who all of a sudden is lighting it up in the NHL and signs an 8-year deal?’’ he asked.

Finding those types of players was part of the goal when Moynes and his One Sports team headed for the NHL Draft in Dallas last June. The two-day affair is the big event of hockey’s off season.

Executives, agents and former players took over the neighborhood surrounding the American Airlines Center, home of the Dallas Stars. Ultimately, Moynes signed several of the draftees there – none of whom are immediately headed to the NHL.

Dressed in his standard uniform – Under Armour pants, sneakers and pullover with the One Sports logo, Moynes hustled between meetings, which often took place in a couple of chairs in the W Hotel lobby.

The firm sponsored a pre-draft dinner for about a half-dozen likely draftees and their families in a private room at Del Frisco’s Double Eagle Steakhouse. There, Moynes gave a short speech wishing them luck and then handed out copies of an investing guide for athletes he wrote: “The Pro’s Process.’’

He first published the book while still at RBC, but the bank wanted nothing to do with it, he says – in part because it told a number of horror stories of professional athletes who squandered their fortunes. RBC opposed using actual names, but when he joined One Capital, Moynes quickly revised the guide adding not only names, but also pictures.

Featured athletes include NHL enforcer Darren McCarty, who filed for bankruptcy with $6.2 million in debts; boxer Evander Holyfield, who lost his mansion to foreclosure; and all-star basketball player Antoine Walker, who blew through $100 million on gambling, commercial real estate deals and an entourage.

Columbus Blue Jackets captain Nick Foligno, who has used Moynes for about 12 years, said the advice is blunt, but it’s also apt.

Earlier in his career, Foligno was determined to build his dream house on a lake in Sudbury, Ontario. But Moynes worried that he didn’t have enough liquid savings. At the time, labor issues were looming in the NHL, adding to the uncertainty. After a long discussion, Foligno reluctantly agreed to wait.

How Budros, Ruhlin & Roe Transformed Their Practice to a Business

The decision proved prescient when NHL owners locked out players for almost half the 2012-2013 season. That meant several months without paychecks.

“He allows you to enjoy yourself — hey it’s your money — but the things that are not necessary or don’t jibe with the process you put in place, he is going to tell you that,’’ said Foligno.

Even after he signed a six-year, $33 million contract in 2014, Foligno said, Moynes didn’t change their financial plan. But the house is now built.

In August, the adviser and his 9-year-old son visited Foligno’s home, to talk finances and watch a charity hockey game that the Blue Jackets forward helps organize.

The property is part of a family compound, which makes it easy for Moynes to check in on two other clients: Foligno’s younger brother, Marcus of the Minnesota Wild, and their father Mike, who played in the NHL for 15 seasons, mainly for the Buffalo Sabres.

Moynes himself was a hockey player — though any thought of sticking with it as a pro dissolved in high school, when he broke his neck on the ice. Still, he came back the following year, shifting to goalie from center.

His father was an investment adviser in Canada, but Moynes wasn’t initially drawn to the business. After skipping college, traveling and working as a tennis pro, he joined his dad’s firm, starting in the mailroom.

In 2004, he was hired at RBC. Over the next decade, Moynes came to realize that he loved the work but didn’t fit in at the buttoned-down bank.

At One Sports, his money-management plan is designed to become just another routine in the highly routinized life of a professional athlete. Hockey players are told when to wake up, when to eat, when to practice, when to get on the bus. Moynes tells them when to save.

Every two weeks during the season, when players are paid, One Sports divides their money into three pots: a checking account for immediate spending on bills; a “liquidity’’ account, which is a money-market fund for bigger purchases; and an investment account. Clients pay a fee based on their assets, ranging from 0.5 to 1.5%.

Moynes preaches mainly the standard financial-planning tenets: invest for the long term, diversify, don’t try to time the market, don’t sell in a frenzy. He tries to use real-world examples.

Panic on the Bus

Take the Boston Bruins on the night of the 2016 U.S. presidential election.

The team was taking a bus to the airport after losing to the Montreal Canadiens when a player grabbed the driver’s microphone and announced that Donald Trump’s victory would send markets into freefall. He urged everyone to dump their stocks immediately.

Along with Brad Marchand, Moynes had two other clients on the team. Each one called or texted him between 11 and 11:30 that night.

“There was a panicked moment on the bus and we all fired off to our financial guys,’’ Marchand recalled. Moynes “gave us the talk, ‘We are in a good position, let’s wait.’’’ Stocks soared the next day and have stayed mostly positive through Trump’s presidency.

Client retention is key to One Sports’s business – and the firm offers various services designed to make sure players stick around. Rick Weiss, an estate-planning specialist, helps with wills, powers of attorney and other documents, tasks that many young athletes tend to ignore.

Weiss spends much of his time texting players reminders to sign the papers he compiles. His biggest challenge is prenuptial agreements. Weiss uses a baseball analogy to describe his success rate. “You know when a batter doesn’t get any hits, they say he’s 0-for? That’s me, 0-for.”

In March, One Sports added a post-hockey career counseling program headed by Grant Clitsome, whose stint in the NHL was cut short by injury. Clitsome is also meant to be a role model to players who might struggle to adjust to retirement. He’s studying for a master’s degree in business and has become a sommelier and an owner of an artisanal cider brewery.

Shannon Brown handles clients’ banking and provides concierge services, a free add-on. If players want pretty much anything they can contact her. She has searched EBay for Yeezy boots, dispatched an intern to wait in line for hours to get the latest iPhone and purchased numerous Rolex watches.

Engagement rings are another frequent request. Players send photos of what they want and the firm forwards them to a custom jeweler in Canada who works for a reduced rate. (However, the Islanders’ Martin took a pass. “We used Boomer’s guy,’’ he said.)

Though it allows players to indulge, the service has a less frivolous side. Brown oversees the packing and shipping of players’ belongings if they get traded mid-season.

She helps with apartment leases and cell phone contracts, which are especially difficult to obtain for foreign players arriving in the U.S. with no credit history.

(NHL contracts are paid in U.S. dollars, even though many players aren’t American citizens. Brown and Moynes, whose clients include citizens of Canada, Sweden, Finland, Germany, Switzerland and the Czech Republic, pay close attention to exchange rates.)

The firm also negotiates for lower prices with various businesses clients use, ranging from a resort in the Bahamas popular for all-star break vacations to a shipping service that brings players’ cars home after the NHL season.

“In our business, you have to be concierge,’’ Moynes said. “We get paid as investment advisers, but at the end of the day my job is to manage their lifestyle.’’

How Budros, Ruhlin & Roe Transformed Their Practice to a Business