How an Advisor Who Hates Sales Built a Billion-Dollar Practice

To say that her strategy worked would be an understatement. Today, the senior portfolio manager at RBC Wealth Management oversees $1.3 billion in assets of 390 high-net-worth and ultra-high net worth clients, while boasting an ever-growing cluster of top-advisor awards from Barron’s, Forbes and The Financial Times.

Baum, 62, not only has a proven talent for forming relationships, she carefully continues to nurture them over the years, as she tells ThinkAdvisor in an interview.

“I know it sounds silly,” she says, “but [my clients] are like my village, my identity.”

The advisor vigilantly watches over the accounts and phones clients proactively when markets turn dicey, putting in a generous amount of time for hand-holding to assuage unfounded worries.

The Baum Jackson Investment Management Group — Baum’s partner since 2000 is certified financial planner Margie Jackson — is based in Annapolis and manages a total $1.5 billion in client assets.

A long-time Chairman’s Council member who holds the Certified Private Wealth Advisor designation (CPWA), Baum has a $1 million account minimum but is somewhat flexible about that with referrals from significant clients.

With her unassuming demeanor, she has a mellow way that surely makes it easy for folks to open up and bond. About 80% of her book is individual clients. The rest are mid-market endowments and foundations.

Starting at Alex. Brown, she remained with the firm through acquisitions by Bankers Trust and Deutsche Bank, then moved to Tucker Anthony, which the Royal Bank of Canada acquired in 2001 and merged with its Dain Rauscher Wessels BD.

Seven years later, as a divorced single mom, she tackled a career reappraisal and made the big switch to financial services.

The FA has landed on The Financial Times’ Top 400 Advisors list every year since its 2013 launch, one of only 19 advisors to do so and the only woman in that group.

Baum devotes a sizeable portion of her off-hours to philanthropic endeavors, notably the Baltimore Community Foundation, whose investment committee she chairs.

Here are highlights from our interview with the senior vice president, who felt confident that building relationships was her certain route to flourishing in the business:

THINKADVISOR: What’s the secret to your success?

PATTI BAUM: The most important thing is I really love my clients. They’re like my village, my identity.

When there’s a big market decline, like last December, do you phone your clients proactively?

I get out my list and start calling everybody. That’s what they hire me for. They hire me to be proactive. Clients want to know that you’re watching their stuff and paying attention. They want to know you’re minding the shop and not out sailing.

What do you do to help clients handle their emotions as investors?

Our job is to try to make sure the clients are allocated such that, in a December like we went through last year, they don’t panic.

When you call them, what do you say?

I say, “Remember that we talked about this? It’s part of being invested in stocks and the price you pay for the part of your portfolio that’s getting better returns in this kind of volatility.” I’ve had several clients say to me, “Thank you for holding my hand. I needed to hear that.”

Sometimes they’ll say, “I’m not worried. I know you’ll get me out before the market goes down.” I always tell them, “No, no. I’m not that good. We don’t know [that far in advance].” Often those big downdrafts happen in a day or two. So I say, “What’s more important is that you’re allocated such that you can stomach [the big drops] and that you sleep at night.”

You have 58% of clients’ assets in stocks and bonds and 15% in mutual funds. Why that allocation?

I understand that you’re a major fan of impact investing.

I’m very big on impact and ESG investing [environmental, social justice, governance]. I think it’s the way of the future. I’ve developed a really good stable of funds that are screened for ESG. Why would you want to own stocks of companies that don’t care about sustainability, governance and diversity?

But FAs, in general, haven’t been too enthusiastic about impact investing, have they?

That was true in the past because for years the funds weren’t strong, and performance lagged. But over the last four years, there’s been a proliferation of funds and families; and because most of them exclude fossil fuels, they’ve outperformed. It’s been amazing. Actually, there’s been a confluence of things: more funds available, better performance and the next generation is demanding [to invest in ESG] because they really care about it. That’s a great tailwind.

What are clients nervous about these days, and to what extent would those issues impact their portfolios?

The current political environment is what I hear most. Geopolitical issues, like China. People talk about the [2020 presidential] election. But who sits in the White House doesn’t really affect the market. The market is basically responding to corporate earnings growth and the health of the economy. I try to remind clients of that. At a conference once, I heard Bob Doll of Nuveen say: “What happens in the White House is what happens if the Orioles win the World Series. It has the same effect across the market.”

What inspired you to be a financial advisor?

I grew up being around people that cared about investing. My father, who had a retail jewelry business, always loved the market; and so did my grandmother. I watched my father pay no attention to the market’s ups and downs while he was putting aside money for my college education.

So you became interested in finance as a career?

I was an investment management and finance minor at Duke. My father helped me get an internship as a gopher during the summers with Dean Witter [predecessor to Morgan Stanley.]

Did you love the business right away?

I swore I would never, ever be a rookie broker because I watched what they did, and it was awful — calling people and getting rejected all the time. I thought, “Oh, my gosh, it must be so hard!”

What career did you pursue, then, after graduation?

I went into the jewelry business with my father. But after seven years and a divorce, I came back to investments.

Was being a rookie as bad as you had envisioned?

I was a slow starter. If I started today, I probably would be fired right away: Some of the bigger firms have quotas. I wasn’t into cold calling with stock ideas. Instead, I was teaching classes and setting up appointments and trying to build relationships. It took about five or six years to even get any traction.

What kept you going?

As my father used to say, “Just keep filling that pipeline — keep putting it in one end, and some day it will come back out.” And that’s what I did. I’m not at all into sales. I’m more into relationships. I always felt that if you did what was right for the client and were honest and had high integrity, [you’d succeed as an FA].

Why did Margie Jackson team up with you in 2000?

[An FA] in the office had technically been my partner for five or six years. He had smaller accounts, while my business had been built on targeting a little bit higher-end people. I was more fee-based; his business was transactional. When he retired, I needed to bring someone in to manage his book.

Why did you choose Ms. Jackson?

Margie was a friend, and I decided it would make sense to bring in someone who I really trusted to treat clients the same way that I wanted them treated. She had an MBA [and became a CFP in 2003]. She’s converted pretty much that whole book. We’re almost all fee-based now and are much more in the consultative business.

How is your compensation structured?

Are you expanding the team?

Yes. In February we hired a CFA who’s doing a lot of the analytical stuff. So we have three FAs now. And I just hired another senior investment associate. I’m trying to build a “bench.” I want to build a team that can be really involved with the clients so if I get hit by a bus, there will be people here who can take over without a wrinkle. I’m also bringing in new people because we have 390 clients, and that’s too many! I want to make sure I’m not stretched too thin.

What’s been the biggest positive change for FAs that has occurred over the 34 years you’ve been in the industry?

Changing from transactional to holistic consulting has been what’s made me thrive. It used to be when I’d pick up the phone to call a client, I felt they didn’t want to hear from me. Now I think they do want to hear from me. [They know] I’m not trying to sell. I’ve become [someone] on their team.

What’s the worst thing for FAs that’s happened during your time in the industry, thus far?

Compliance! The most negative part is by far the tremendous amount of legal documentation we have to do and the ridiculous number of papers needed to be signed in order to do anything. Oh, I could go on and on.

Getting hired. It’s embarrassing to look around and see how few women advisors there are. It’s such a great career for women.

In general, when women look at professions, I think they tend to avoid risk because they’re not particularly confident taking on risk in the corporate world and knowing their own value.

How is the job of FA risky?

Not only do you have to feel confident in your investment recommendations, you have to be okay with getting rejected.

What’s one plus on the other side of the ledger?

A cool thing is that you get to see how people build businesses and make wealth. There’s usually a story about how they’ve accumulated money. There’s some history as to how they did it. And it’s fascinating. 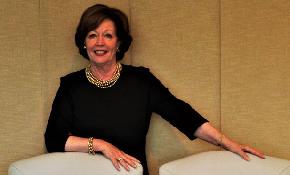 Longtime planner Linda Lubitz tells ThinkAdvisor about this unconventional arrangement, plus how she screens out clients who are "pains."

How RBC’s Kimmell ‘Bulldozed’ Through the Glass Ceiling

From switching paths in financial services and to overcoming work/life hurdles, she's helped blaze a trail for others.

Why Schwab’s Sonders ‘Keeps It Simple’