A Sustainable Robo-Advisor That Wants to Redefine Corporate Success

Newday favors companies that value employees and suppliers as much as their shareholders.

Newday is a rarity among digital advisors. The robo-advisor, which launched over the summer, is not only focused on marrying sustainable investments to a digital platform, which others have done, but also, in the words of CEO Doug Heske, engaged in “recrafting the idea of capitalism” beyond shareholder capitalism, which dominates today.

“The world is demanding a different form of capitalism that we’re defining as new capitalism,  making business decisions …. that are in the best interests associated with employees, customers, shareholders and the environment,” Heske tells ThinkAdvisor.

“Companies that rate high in all those variables tend to have a lower cost of capital and superior financial performance,” says Heske. (Numerous reports support both, including reports by Oxford University and Arabesque Partners and by Morningstar.)

Newday Co-Founder and President Alex Meek adds that if companies are not taking care of employees and investing in them and not investing in their suppliers and supplier relationships, those “contingent liabilities,” which don’t show up on the balance sheet immediately, eventually will, impacting performance.

Newday differs from most other robos in other ways as well. Including its:

These and other attributes of Newday reflect its primary audience: 25- to 35-year-olds who want to align their financial life with their social values but don’t necessarily have the knowledge or expertise to do so.

Newday currently offers six different direct-to-consumer equity portfolios, each run as a separately managed account consisting of roughly 20 to 40 individual stocks, depending on the portfolio. These include a core global impact portfolio and five thematic portfolios: climate action, ocean health, gender equality, fresh water and animal welfare. All but the last one reflect one of the 17 United Nations Sustainable Development Goals.

This spring Newday hopes to introduce two flagship portfolios: a publicly traded portfolio built around its philosophy of new capitalism, which will be available on its platform, and a portfolio  that invests in privately held companies that are driving socioeconomic change. The latter will be available to family offices initially and potentially on its direct-to-consumer platform in the future.

Investors who want to sign up for robo-advisor can download the app on their cell phone, then answer questions about their impact investing preferences, risk tolerance and investment goals, along with data on their employment, income and net worth info. With that information in hand, Newday will recommend specific impact portfolios and accounts — whether taxable or tax-free — and a choice of a personal IRA, Roth IRA or SEP IRA. An investor can then edit those recommendations and indicate how much he or she wants to invest per month, along with a link to a bank account to fund the account. 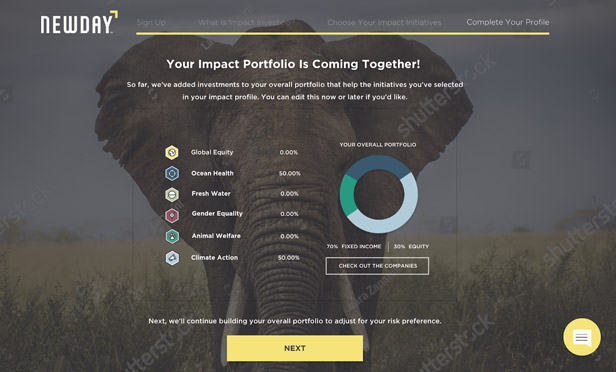 The platform is currently in its infancy with “north of a million dollars” in assets under management, according to Meek, who, along with Heske, expects a $25 million-plus institutional investment in its global impact portfolio by the end of the first quarter. The two executives tell ThinkAdvisor that the firm is talking with some major Wall Street firms and institutional asset managers about including its strategies on their platforms and with smaller advisory firms.

Newday can furnish its portfolios directly to advisory firms or through a firm’s custodian after entering into a distribution agreement with that custodian. Newday’s custodians are Apex and Charles Schwab. 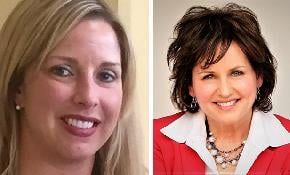