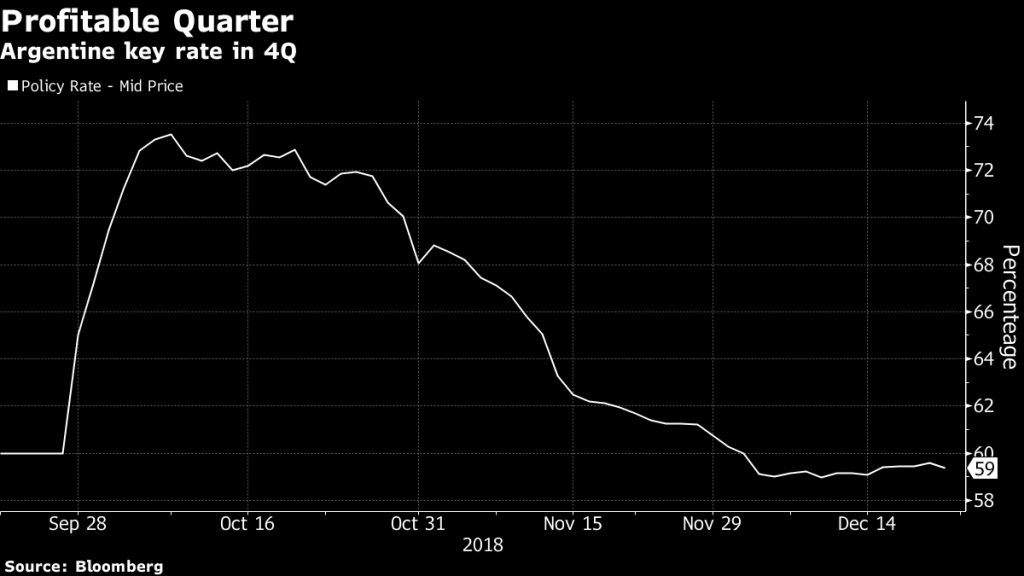 The world’s best-paying bond has a big fan in one of the world’s largest bond investors.

Pacific Investment Management Co. and its parent company, Allianz Global Investors, have snapped up an Argentine government note that pays a floating coupon equal to the country’s benchmark interest rate — which at one point in October reached a staggering 74 percent. They boosted holdings by more than 50 percent this year and now own about a quarter of the 104 billion pesos ($2.7 billion) outstanding, according to data compiled by Bloomberg.

While the nominal returns this year have been huge — the quarterly payout this month was at an annualized rate of 65 percent — holders measuring their investment in dollars have seen wild fluctuations. The peso plummeted 50 percent from the end of April through September, but has rebounded more than 7 percent since then, meaning the currency has gone from the world’s worst performer to one of the best.

When Argentina issued the bond in June 2017, it was unlikely anyone in the government envisioned how costly it would be. The benchmark rate at the time was a more modest 26 percent and the nation was a darling of investors betting big on President Mauricio Macri’s pledges to revive an economy strangled by his socialist predecessor.

But that changed this year as slowing growth, stubborn inflation and a growing budget deficit sent the peso tumbling. In response, the government sought a record credit line from the International Monetary Fund and the central bank jacked up borrowing costs — first to 40 percent in May, then 60 percent in August and more than 70 percent in October before settling back near 60 percent now.

The economy entered a recession this year and analysts don’t forecast a resumption in growth until the second half of 2019. Consumer prices are poised to increase about 47 percent this year, more than triple the central bank’s initial target of 15 percent.

Pimco hedged some of its currency exposure to the Argentine notes, according to a person with direct knowledge of the matter, who asked not to be identified because the information is private.

“Emerging markets remain subject to both internal and external sources of volatility,” Mike Gomez, Pimco’s head of emerging market portfolio management, said in an email. “A disciplined and highly differentiating approach to the asset class provides opportunities for patient investors to benefit from dislocations that create compelling value.”

AllianceBernstein is the second-largest holder of the bonds, with 6.5 percent outstanding, and Goldman Sachs is No.3 with 4.4 percent, according to data compiled by Bloomberg that covers a bit more than half the total amount. Franklin Templeton is lower on the list with a 2.1 percent stake in the notes after building up its holdings in the third quarter.

“The peso already had its big selloff in late summer and early fall,” he said. “We increased our exposure to capture the depreciated currency and significant increase in interest rates. The necessary adjustment measures were underway to stabilize the economy. The worst is behind us.”