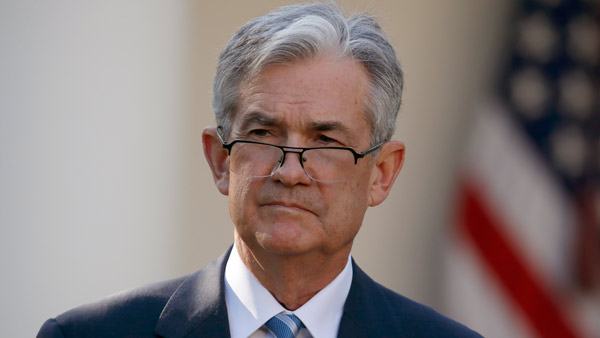 Federal Reserve Chairman Jerome Powell said interest rates are “just below” the so-called neutral range, softening previous comments that seemed to suggest a greater distance and spurring speculation that central bankers are increasingly open to pausing their series of hikes next year.

Wall Street embraced the news with a rally for Treasuries and a surge of more than 2 percent for major U.S. stock indexes. Powell’s “just-below” description tempered remarks last month that markets read as a signal of more aggressive monetary policy tightening. Speaking on Oct. 3, he said that “we may go past neutral. But we’re a long way from neutral at this point, probably.”

In his speech Wednesday to the Economic Club of New York, Powell said the Fed’s benchmark interest rate was “just below the broad range of estimates of the level that would be neutral for the economy — that is, neither speeding up nor slowing down growth.”

The S&P 500 was up 1.6 percent as of 1:26 p.m. in New York, on track for its biggest rally in three weeks, while the Dow Jones Industrial Average rose as much as 2 percent. The rise in Treasuries pushed down the yield on 10-year notes as low as 3.04 percent, from 3.07 percent before Powell’s speech. The Bloomberg Dollar Spot index was down 0.6 percent after rising earlier in the day.

If rates are closer to what policy makers ultimately judge is the neutral level, that could signal the Fed will act less than previously projected. Eurodollar futures pricing reacted to Powell’s comments, reflecting even firmer expectations that the Fed will hike only once next year.

Powell’s remarks on the economy and monetary policy were seen as keeping the Fed on track to raise its benchmark in December from the current 2 percent to 2.25 percent range. They offered few explicit clues, however, as to how many hikes he thinks will be necessary in 2019. Powell repeated his view that the Fed will have to be especially responsive to incoming economic data.

“We also know that the economic effects of our gradual rate increases are uncertain, and may take a year or more to be fully realized,” he said. “While FOMC participants’ projections are based on our best assessments of the outlook, there is no preset policy path,” Powell said, referring to the central bank’s Federal Open Market Committee, which sets interest rates.

Even before the speech, investors had grown skeptical that Fed officials will reach their own median projection for three hikes in 2019 against a backdrop of slowing growth and uncertainty over the U.S.’s ongoing trade dispute with China.

“As always, our decisions on monetary policy will be designed to keep the economy on track in light of the changing outlook for jobs and inflation,” Powell said.

The Fed still sees the economic outlook as relatively strong. “My FOMC colleagues and I, as well as many private-sector economists, are forecasting continued solid growth, low unemployment, and inflation near 2 percent,” Powell said in the speech.

“Such losses are unlikely to pose a threat to the safety and soundness of the institutions at the core of the system,” he said.

Powell spoke a day after President Donald Trump renewed his criticism of the Fed’s recent policy by telling the Washington Post that he wasn’t “even a little bit happy with my selection of Jay.”

The Chairman has repeatedly said he won’t be swayed by political pressure and will stay focused on the Fed’s dual mandate. Neither of the two questioners of Powell at Wednesday’s event asked him for his views on the president’s complaints. Daniel Kahneman: Your Intuition Is Wrong, Unless These 3 Conditions Are Met