Minutes from the Fed's last policy meeting also noted that some officials believe the Fed should drop "accommodative" to describe policy "fairly soon."

U.S. central bankers are ready to raise interest rates again so long as the economy stays healthy, according to a record of the Federal Reserve’s most recent policy meeting.

“Many participants suggested that if incoming data continued to support their current economic outlook, it would likely soon be appropriate to take another step in removing policy accommodation,” minutes of the July 31-Aug. 1 Federal Open Market Committee meeting released Wednesday in Washington said.

U.S. stocks fluctuated and the dollar fell following the report. Led by Jerome Powell, a Trump appointee who took over the chairmanship in February, policy makers are gradually raising rates. They aim to give the economy room to run while also trying to keep inflation expectations anchored.

There’s little evidence that the seven quarter-point increases since December 2015 are hurting growth. Nevertheless, the rate increases have drawn criticism from President Donald Trump. Powell may update his outlook when he gives a speech Friday on “Monetary Policy in a Changing Economy” at the Kansas City Fed’s annual forum in Jackson Hole, Wyoming.

Fed officials left the benchmark lending rate unchanged earlier this month while upgrading their description of economic growth in their statement to “strong,” compared to “solid” in June.

Much of their discussion during the meeting involved upside and downside risks.

Some participants raised the concern “that a prolonged period in which the economy operated beyond potential could give rise to inflationary pressures or to financial imbalances that could eventually trigger an economic downturn,” the minutes said.

Fed district banks reported that firms had “greater scope than in the recent past to raise prices” in response to strong demand or rising input costs.

They debated the impact of the fiscal stimulus with some noting “larger or more persistent positive effects” as a potential upside risk. A few participants indicated “that a faster-than-expected fading” of fiscal stimulus or a larger-than-anticipated subsequent fiscal tightening “constituted a downside risk.”

“All participants pointed to ongoing trade disagreements and proposed trade measures as an important source of uncertainty and risks,” the minutes said.

The staff gave a presentation on the lower boundary on interest rates and alternative policy tools. Participants emphasized there was “considerable uncertainty” about the economic effects of unconventional tools, the minutes said, and agreed to continue studying the topic at future meetings.

The staff forecast continued to project that the economy would grow “at an above-trend pace.” Staff economists also “continued to assume that the projected decline in the unemployment rate would be attenuated by a greater-than-usual cyclical improvement in the labor force participation rate,” the minutes said.

Data showing a robust U.S. labor market with inflation around the central bank’s 2 percent target have solidified investor expectations of another hike at their meeting next month.

The minutes also contained a rare mention of the chairman, saying Powell “suggested that the committee would likely resume a discussion of operating frameworks in the fall,” covering topics such as the size and composition of the balance sheet and the implication of new financial rules on reserve demand. 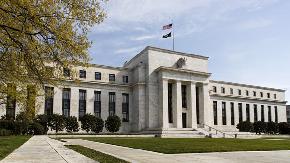